With the addition of Bentayga to its range, Bentley offers a go-anywhere machine to its customers that promises the same level of luxury expected from the British luxury carmaker in an off-road-capable SUV body. However, that didn’t stop a bunch of Russians to build a modified Bentley Continental GT that can devour off-road tracks like a tank; quite literally! Meet the Ultratank, the world’s first Bentley that rides on tank treads. Popular Russian YouTube channel AcademeG built this make-shift tank built out of a previous generation Bentley Continental GT coupe, which has been completely modified underneath the body shell. Beneath the Bentley bodywork is a custom frame and a solid rear axle to power the tracks. It uses that car’s original V8 engine that sends power to the tank treads through a torque converter automatic. 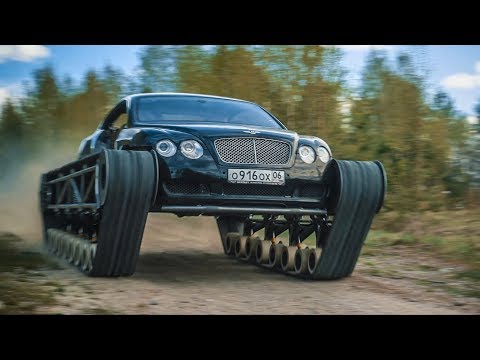 While the Bentley Continental GT tank still has the OEM steering wheel, it doesn’t turn the tracks. To the turn this beast of a machine, the brakes are applied to the inside track, which lets the outside track to get power through an open differential and ultimately rotating the vehicle. The Bentley is still far for being completed and free of issues. For one the doors are still missing, which won’t make the cabin as luxurious and comfortable as the original car. On the maiden run, the tracks also came off on hard cornering, and putting them back on isn’t an easy task. The team also wants to make some adjustments to the powertrain in order to make the Ultratank reach a top speed of 62mph (the current top speed is 31mph). Have a look at the two videos posted by the team which shows how badass the Bentley tank really is.