Dutch submersible manufacturer U-Boat Worx has revealed an underwater superyacht concept called Nautilus during the Monaco Yacht Show. The concept has been named after Captain Nemo’s fictional submarine featured in Jules Verne’s novels Twenty Thousand Leagues Under the Sea and The Mysterious Island. There’s a good reason for that; you see the Nautilus superyacht concept can function as both an on-water vessel as well as a submersible, just like the mythical vessel it is named after. According to the Dutch company, Nautilus has a depth rating of over 200 meters, which is quite impressive. Just to put it into context, personal submarines usually don’t go to such depths and only military submarines operate in that kind of depth. 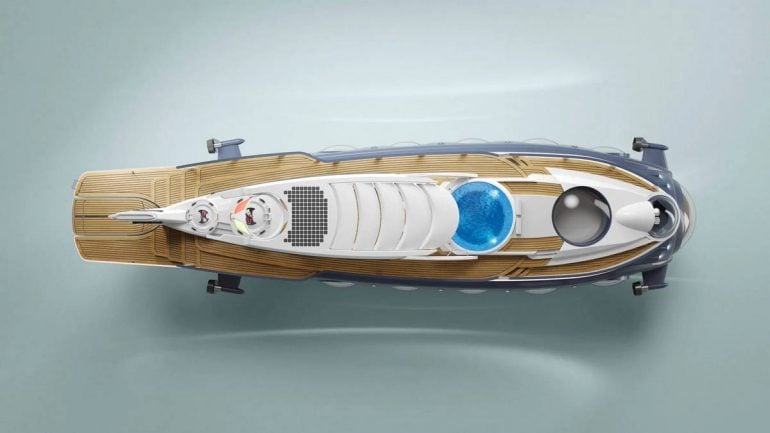 In terms of design, the Nautilus concept is very different from the personal submarines U-Boat Worx is known for making. Measuring a tad bit smaller than 30 meters, the vessel is shaped like a submarine but has a yacht-like deck. In fact, the sizeable sundeck offers a range of relaxation and recreational features and is equipped with a freshwater pool, a bar, and a dining table. But all of those can only be enjoyed when the vessel is being operated over the surface of the water. The vessel’s interior includes a 50-square-meter dinner and lounge area with four massive circular windows, a master cabin, and four additional cabins. Additionally, it also has sleeping quarters to accommodate up to six crew members. 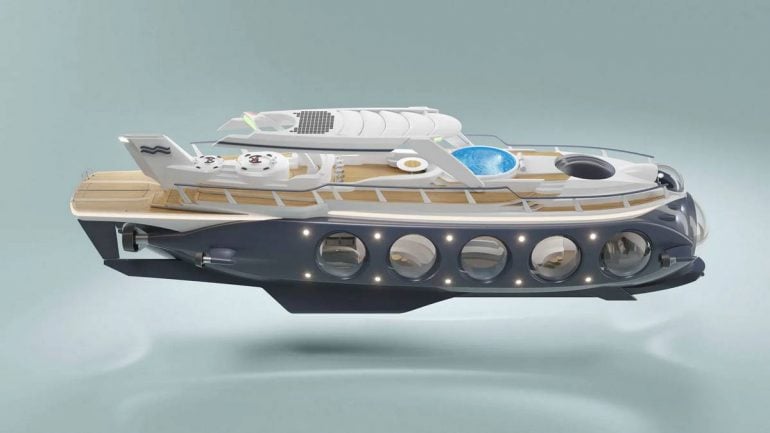 The Nautilus concept also comes with a pressure-resistant electrical tender called Aronnax which is stowed under the aft deck. It can be used for transporting five scuba divers underwater. The vessel’s diesel-electric powertrain helps it achieve a surface cruise speed of nine knots and an underwater speed of four knots. U-Boat Worx claims the superyacht will be able to stay underwater for up to four days at a time. “People that have decided to buy a yacht will now have to consider if their vessel of choice can also dive down to 200 meters,” said U-Boat Worx chairman and founder Bert Houtman. “If the sea becomes too rough, you simply dive and continue your voyage in comfort. With the Nautilus, the yachting market will never be the same again.”