In the world of over the top car customizations, nothing comes even remotely close to the supercars owned by wealthy playboys and mega-rich Arabs. As much as we want to believe that bling is so last season, it seems it is back in vogue again. A couple of days back, a Mercedes CLS 350 covered with a million Swarovski crystals created a stir on the streets of London. Just before the Paris Fashion Week kicked off, a gold Lamborghini Aventador was spotted cruising the streets of Paris. Valued at a whopping £4 million ($6 million approximately), the gold plated Aventador wears a distinctive 666 number plate and is believed to be owned by a Saudi Arabian (no surprises there!). 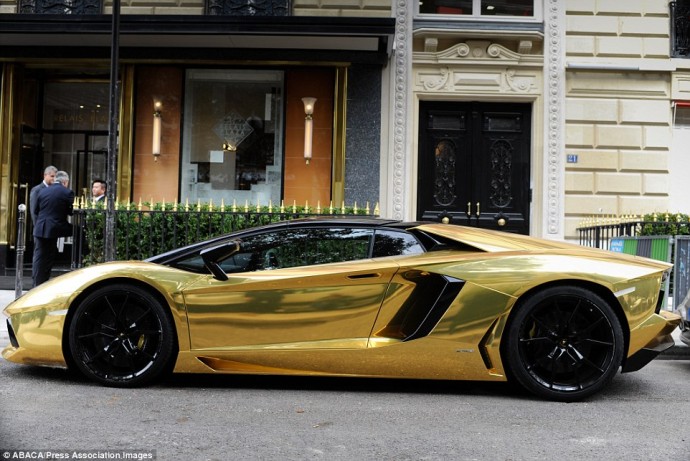 Car enthusiasts and intrigued by-standers were quick to catch a glimpse and photograph the gold plated vehicle while it was seen driving through some of Paris’s most exclusive streets and later spotted parked outside the Plaza Athenee palace hotel on the luxury Avenue Montaigne. The supercar season in Europe, a particular time of the year when Arabs arrive in the continent with their uber-expensive rides, generally ends by mid August but the gold Lamborghini parked up outside the Plaza Athenee suggests that the supercar summer is not quite over yet.