Bubbly, caviar and showers in the sky. Who does not want to travel in utmost comfort at 35,000 feet, but is there a way to experience first class without paying for it? Wendy Moncur answers.

We all dream about having the prancing horse in our garage. But what does it feel to live with one; Jody K Deane answers. 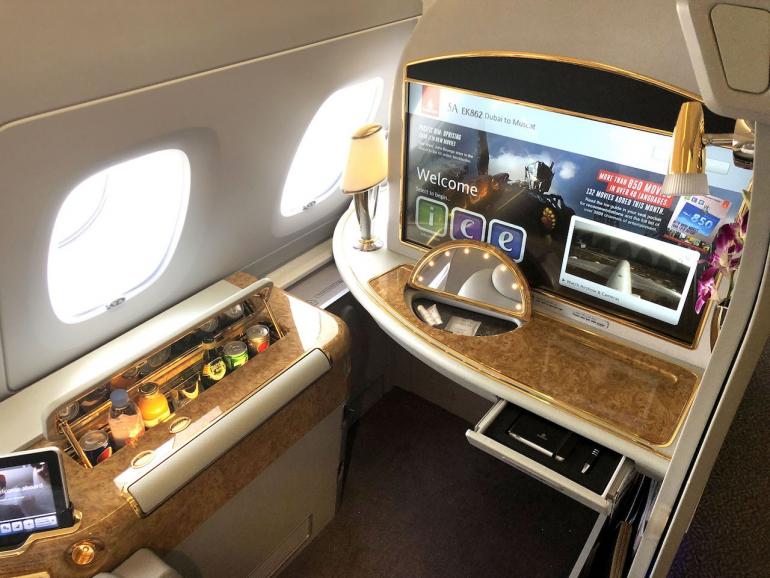 1. You can only get bumped up to first class if you are already in business class. …People who think they can get from economy to first are delusional. If there are spare seats in first, they bump a business class passenger. Their now-vacant business seat can be filled by a premium-economy passenger, and so forth.

2. You must be a member of the airline’s frequent flyer program. ….if you aren’t loyal to them, they won’t be loyal to you. I have seen/heard cabin crew tell a passenger he was not entitled to a free upgrade because he was not a member.

3. Travel alone. …..your family of 4 is just not getting an upgrade – there aren’t that many spare seats in first, and even if there were, they wouldn’t be together anyway.

4. Pay full price for your ticket ….if you are on a discount fare, they’ll bump someone who paid more than you.

5. Dress well. ….sweats and t-shirt won’t cut it. Business attire is better. (eg suit and tie for men, classic elegance for women.) This is regardless of how old you are. You need to look like you belong in first class. Think of it from a paying passenger’s point of view: you paid top dollar for first class, and here is some jumped up so-and-so who got in free. So look and act like you paid for it, and don’t brag otherwise. 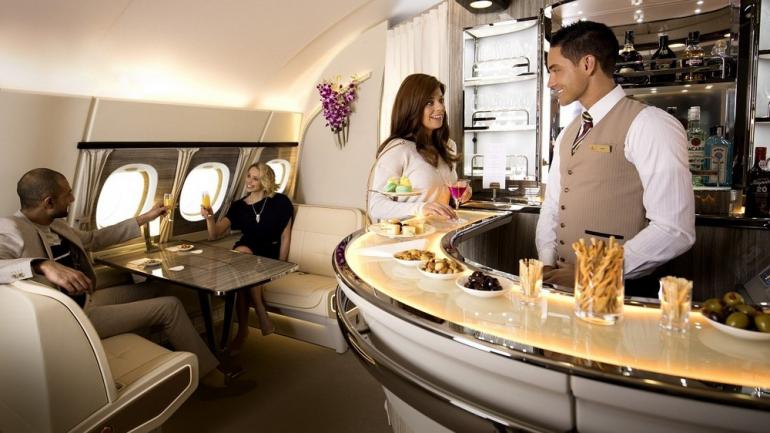 6. Behave yourself. …getting drunk in the bar makes you a less desirable option to be the bumped up passenger.

7. Be early, or at the very least, on-time. …. contrary to what others here have said, showing up late is not a way to get bumped up. Any spare first class seat will have already been allocated by then. 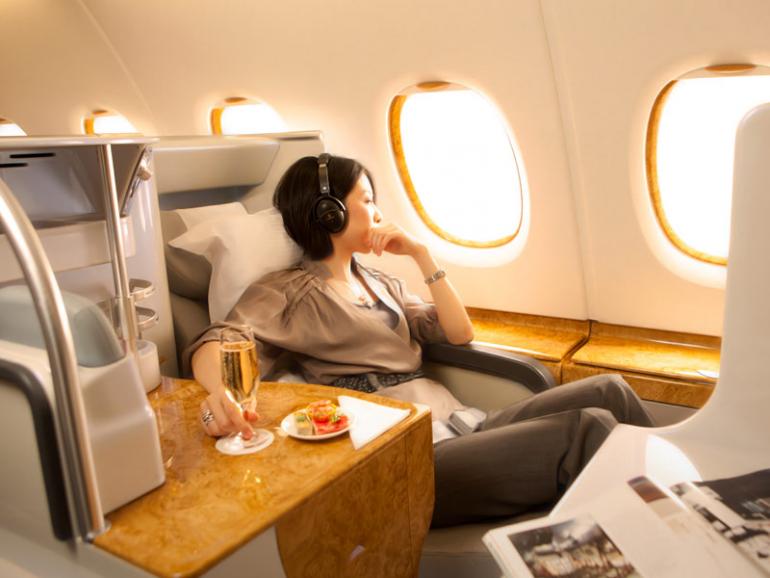 9. Don’t be too needy. …If you have a wheelchair or walk with a frame, or if you use a CPAP machine or oxygen, or you are blind and travelling with an assistance dog, the logistics of getting you to your seat and accommodating your special need have already been worked out – you most likely won’t get moved. You may even have a cabin crew assigned to you. They have already been briefed as to your needs. Cabin crew do not move to first class just because you do. Same goes if you are travelling with an infant. While all classes have seats with a cot/cribs for a baby, chances are that seat is already booked. Having a bad back, or other invisible complaint at the gate just makes you annoying. If you have a pre-existing condition, it is your responsibility to ensure your needs are met. The airline will not accommodate your lack of planning. You can take your own ergonomic cushion, haemorrhoid pillow, neck pillow, splints, ear plugs, etc, etc. As yet, I have not encountered a medical condition that is surprisingly agonising in economy, and miraculously cured in first class.

10. Don’t ask. …. It is luck and luck alone that a spare first class seat is available anyway. Asking just makes you look like you want something for nothing – ie the most annoying kind of passenger. Airline staff are human too. If you are annoying to them, they will be annoying to you, by refusing your request.

11. Ask. …yes I just contradicted myself, but the worst thing that can happen is they say no. And ask as though you are willing to pay the extra. This is how you find out if indeed there ARE spare seats. This especially works if your ticket was paid by your company/employer, and you want to pay for the upgrade out of your own pocket.

12. Fly first class before. ….if you usually fly first class, but for some reason you are booked in business class (eg your employer/secretary/colleague/wife/whomever booked it for you) then you will show up on the computer as a regular first class passenger. If an upgrade is available, you will be first on the list. This happened to my uncle. An airport staff member actually queried why he was waiting in the business class check-in lane. She called him by name over to the first class desk, and proceeded to fix the “obvious” mistake. lol. It’s not what you know, it’s who you know.

13.If the airline is at fault, you can ask to be moved. eg a faulty seat back that won’t sit up. A seat that wobbles precariously, a seat belt that won’t fasten. Often though, a faulty screen won’t help – it is not a safety issue. However, chances are seat faults will just get you a different seat in the same class, and not an upgrade. 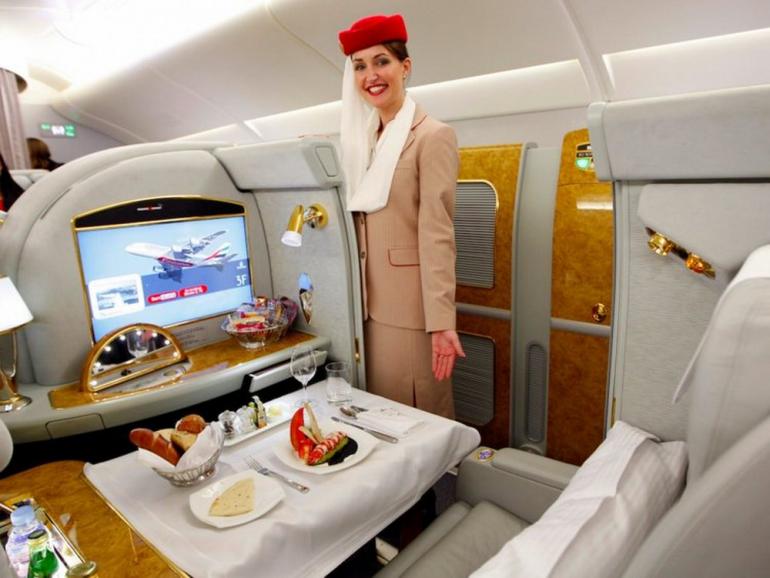 14. Above all, don’t expect to get something for nothing. If the airline can sell a seat, they won’t give it away. First and business class pay a lot more money in order to get comfier seats, better service, better food, etc, etc. This extra money paid by these customers is what allows the rest of us to get discounted economy seats at far reduced rates. THEY pay more, so YOU can get somewhere cheaper. Don’t be ungrateful, and don’t expect to get it just because it is available. Airlines don’t HAVE to bump up passengers. If a flight is overbooked, bumping happens. A less-than-full flight might not. Remember too that an overbooked flight might mean some people get bumped OFF. If you don’t get bumped up, at least be grateful you are even on the flight.

15. Edit: adding number 15… If you are on an overbooked flight, take up the offer to fly later in exchange for an upgrade (or vouchers, accommodation, etc) A few people have commented here, so I thought I should add it to my list.

Seriously – look at it from the airline’s point of view: if you had to choose someone to bump up a class, who would YOU choose? A demanding, troublesome, noisy, ungrateful annoyance? Or a polite, well dressed, well-behaved frequent flyer whom you have encountered many times before? 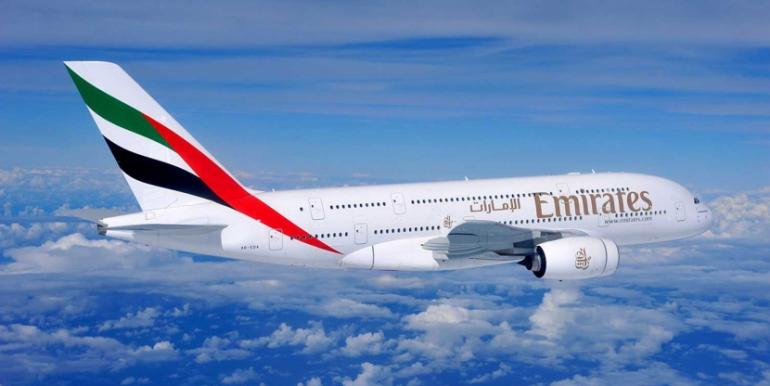 Having said that, the very first time my mother flew business class, she was given a free upgrade to first. How cool, huh? She’d only ever flown economy before. She was booked on a 28+ hour flight from Britain to Australia, in economy, and was dreading the cramped uncomfortable journey. Getting old, she couldn’t cope as well as when she was younger. She decided about a week before the flight to upgrade herself to business class. It wasn’t until an hour into the flight that she realised she was sitting in first class. lol.

Upgrades do happen, but they are rare. If there is one on your flight, I hope that you are the one who gets it. Good luck. 🙂

Tags from the story
Emirates, Quora

For the price of a bottle of champagne, you can now rent this gorgeous Italian…

Think Qatar’s football stadiums were impressive? According to AI prediction, this is what London’s iconic…

Following his joining the Al Nassr club, Cristiano Ronaldo and his family were whisked to…