Have you been looking to hire an ultra-cool, head-turning wedding car for the most special day for you and your better half? Well, if you’re in England, you could go for this wicked Tank Taxi which will take you to your wedding in the most dramatic fashion for $1000. This military vehicle belongs to a British man named Merlin Batchelor, who bought it off the Internet for $35,000, including basic repairs to get it road-worthy. “They are pure entertainment. As you drive along the street, there are so many people smiling, laughing, pointing,” Batchelor said in an interview with CBS News. He admits that it’s not a tank but an armored vehicle He says “tank taxi” rolls off the tongue better and looks similar.

Batchelor claims that he bought the armored personal carrier, but he started getting requests for rides soon after. “First, I had neighbors, then friends asking, then friends of friends, and then people I didn’t even know asking me can I take them to, mainly asking about proms,” says Batchelor. This gave him an idea for the perfect side hustle: rent out the Tank Taxi for $1000 a trip, ferrying people to weddings, proms, and even funerals. The video by CBS News also shows a wedding party of a neighborhood couple who chose the Tank Taxi over a mundane wedding car. “When your neighbor buys a tank and your other half spends most of his time with that tank, it’s inevitable that you’re going to your wedding in a tank,” exclaims the bride. It’s not the first time someone has turned an armored vehicle into a taxi. Back in 2019, a UK-based company called Tanks-alot introduced a stretched tank limo that was available for hire for special occasions. 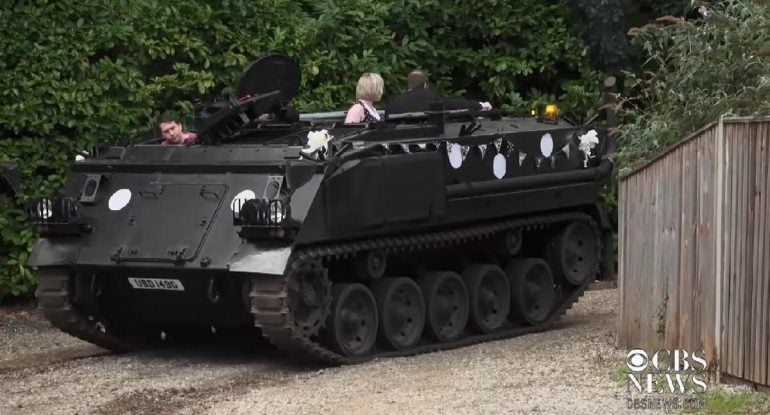 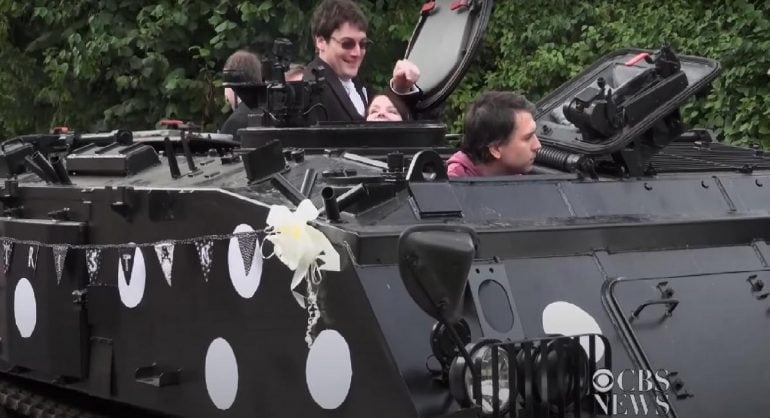 Tags from the story
Taxi, UK