Sandra Bullock’s blood-curdling drifting sequences in ‘Gravity’ only seem to have encouraged space travel enthusiasts further. So while Sir Richard Branson’s Virgin Galactic may already be garnering a lot of attention, including the celebrity kind, what with even Bieber Fever not foregoing the space chase, there is yet another entrant offering what could be termed a high-altitude vacation. That too, minus the hassles of a sub-orbital rocket and a hefty price!

A new Arizona company is keen on taking its A-game to the space tourism sector. It may be no Virgin Galactic with its 360,000 feet sub-orbital rides, but World View will offer rides in a spacious gondola, suspended beneath a balloon, which will carry passengers around 100,000 feet high. “Seeing the Earth hanging in the ink-black void of space will help people realize our connection to our home planet and to the universe around us,” World View CEO Jane Poynter said in a statement. “It is also our goal to open up a whole new realm for exercising human curiosity, scientific research, and education.” Aside from the space (no pun intended), even the view from the gondola will be above par if ‘par’ in space-speak signifies what is seen from Virgin SpaceShipTwo spending few minutes at the peak of its flight. The ability to spend several hours at 100,000 feet seems a fair enough space trade for the weightlessness of Virgin Galactic’s parabolic flight path. 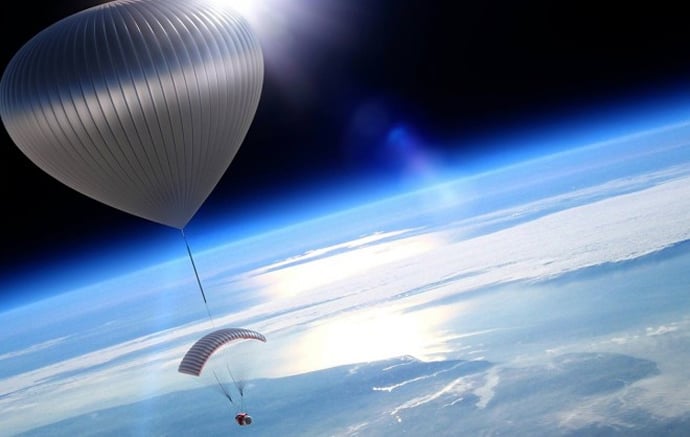 World View isn’t alone in its trade-worthy attempt, however. Zero2infinity seems to be gearing up to offer a similar sight. The latter recently tested a scale version of its system, while World View still awaits its flight testing. Still, the company is hoping for passenger flights as early as 2016. Both companies insist on the view from their respective balloons being close to those from the rocket-powered flights.

There is no actual line where the atmosphere ends and where space begins, so it’s common for companies to include “space” as part of the ride. Even certain airplanes can fly at up to about 70,000 feet, and some jets have made “zoom” flights past 100,000 feet. But World View shared a copy of a letter from the Federal Aviation Administration claiming that the company’s six-passenger, two pilot gondola will qualify as a space vehicle because the conditions at 100,000 feet call for the same kind of protection as in the case of those actually entering space, “because a person would rapidly experience fatal decompression.”

But before you start picturing the “fatal decompression,” imagine being flown back to the earth beneath a paraglider-type wing with added range and maneuverability that World View will provide, that too at $75,000, a whole lot less than Virgin Galactic’s $250,000 per ride ticket price. The company also expects to expand its operations after the initial launches from several locations around the United States.