The Rolex Yacht-Master debuted back in 1992 as a timepiece designed specifically for navigators as demonstrated by its bi-directional rotatable bezel. Over the last three decades, the collection has continually evolved with the addition of various dressier and ornate iterations like the Everose Yacht-Master 40 with a multi-color gem-set that came in 2017. The Swiss watchmaker has released a new version of the gem-studded Yacht-Master 40 at this year’s Watches and Wonders show. The biggest change in the new Oyster Perpetual Yacht-Master 40 comes in the form of its 40mm case that’s made from 18ct white gold – a first for the model. 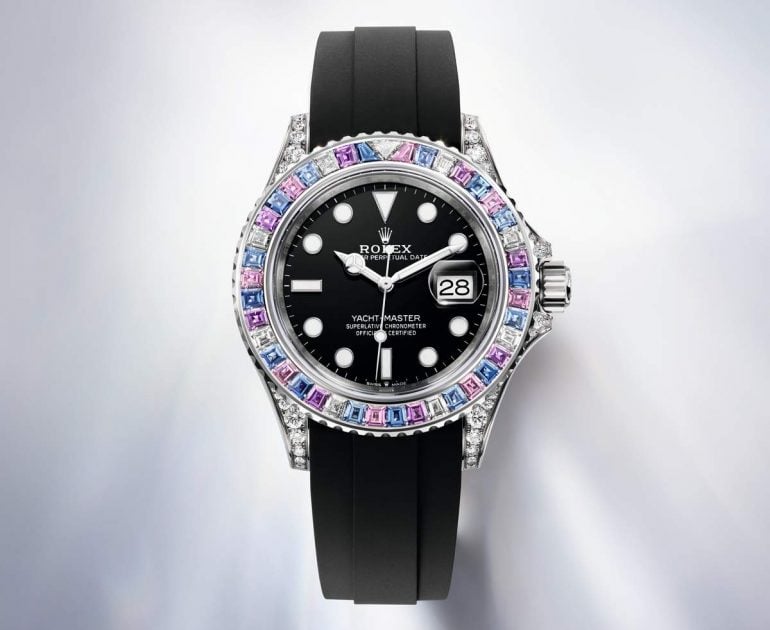 Just like the Everose version, the newest addition to the collection features a bi-directional bezel that is studded with multi-colored gemstones. However, this time around, the gems aren’t as brightly colored and flashy. Instead, it’s studded with pink, light blue, purple, and dark-blue sapphires, along with diamonds, which beautifully blend in with the white gold case. Rolex says the color combination of the trapeze-cut precious stones has been carefully chosen to echo the hues of the aurora borealis and the glow of dawn. The sequence of colors is repeated eight times over the bezel. Furthermore, 46 brilliant-cut diamonds cover the entire case from the lugs to the crown guard.

The rest of the watch is pretty much identical to the previous iterations except for the borders of the hour markers and the hands that are also made of white gold. Even the text is in white to match the theme of the timepiece. Housed inside the case is the caliber 3235 that debuted in 2015 and has powered all the iterations of this model since 2019. The self-winding movement offers a power reserve of 70 hours. Rounding out the new Oyster Perpetual Yacht-Master 40 is an Oysterflex bracelet that features a Rolex-designed, patented Oysterlock folding safety clasp also in 18ct white gold.