There are a vast number of complications in the world of high-end watches, many of which serve a functional purpose while others are relics of a time gone by that still evoke wonder through the complexity of their mechanical assembly. Since complications can be so, well, complicated, we figured a starting guide to some of the most high-end and ubiquitous complications is in order. Here, in no particular order, are some our favorite complications explained as well as a watch that we think embodies the complication 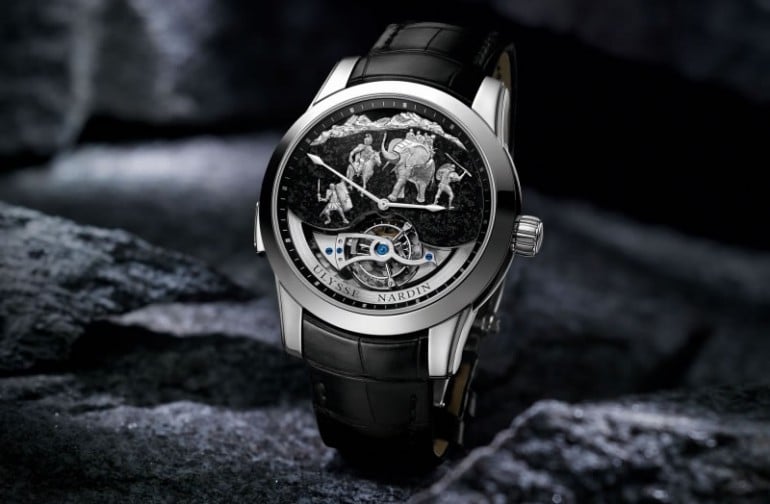 Minute Repeater – One of the most “high-end” and perhaps the most complicated of complications is the minute repeater, known for its hallmark “chime.” The minute repeater hearkens back to the days before electricity, allowing pocket watch owners to be able to know the time in the dark. The way it works is as such- the first series of chimes is counted to determine the hour, the second series of chimes indicates quarters, or 15 minute increments. The final series of chimes indicates the minutes added to the quarters, if there are any. So, five chimes, followed by one chime, followed by three chimes would indicate that the time is 5:18. A highly desirable luxury complication, the minute repeater has stood the test of time and stands at the pinnacle of high end watchmaking.

It is difficult to discuss the minute repeater without mentioning the Patek Philippe Grandmaster Chime 5175 watch. This $2,600,000 piece is Patek’s most complicated watch with 20 complications, but it is the Chime of the minute repeater that stands above all else. Only six pieces of this “mega watch” were produced and it is a grail for even the most serious watch collector. 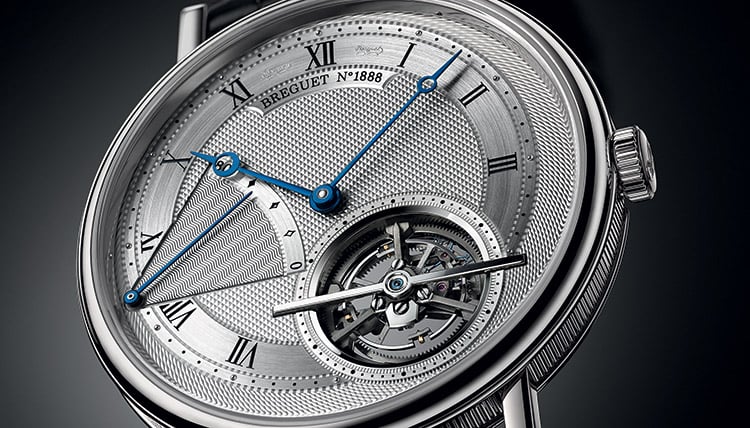 Tourbillon – Wildly popular and ubiquitous with high end luxury watch complications is the tourbillon. Essentially, the tourbillon is characterized by a balance wheel housed in a “cage” that is constantly moving in one direction, completing rotations typically in 60 seconds but oftentimes 30 seconds and less. Oftentimes the tourbillon is also used as the seconds counter for this purpose. The initial purpose of the tourbillon was to improve accuracy by negating the effects of gravity on the watch. Interestingly, even if the tourbillon works perfectly in negating the effects of gravity, there is very little improvement in accuracy. But then again, luxury watches and high end complications are not all about practicality are they?

There are countless tourbillon watches out there, and you can get lost researching the different kinds ranging from flying tourbillons to multi-axis tourbillons. Since Abraham Louis Breguet invented the tourbillon, the Breguet Classique Tourbillon Extra-Plat Automatique 5377 watch is a fine example. Simple, elegant, and timeless- this piece highlights the tourbillon with a quiet but proud presence. It is priced at $149,500 in 18k pink gold and $163,800 for platinum. 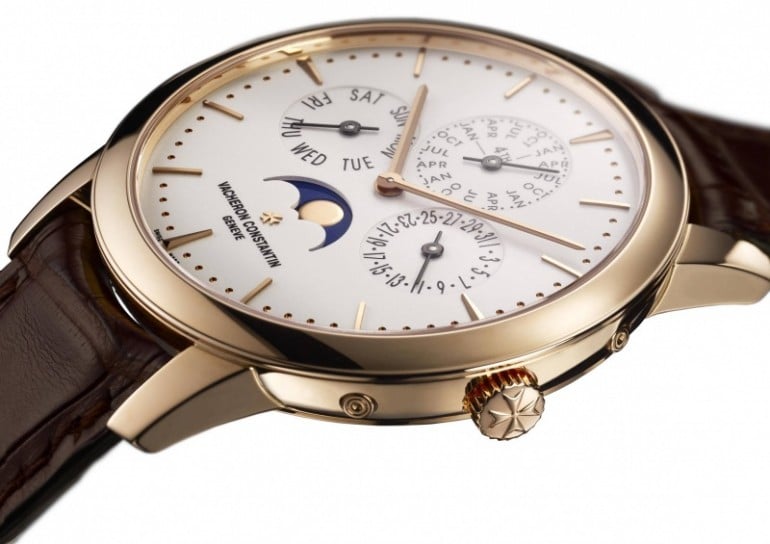 Perpetual Calendar– One of the most complex and desired complications in watchmaking is the perpetual calendar, which accurately displays the date, day, month, and year while taking the leap year into account. These mechanical marvels are a must-have for the serious collector. If you’re of more modest means but still want a high-level calendar complication watch, there are annual calendar watches which serve the same functions but do require resetting for the leap year.

The new Vacheron Constantin Patrimony Perpetual Calendar Collection Excellence Platine watch is an example of a meticulous and beautiful perpetual calendar watch. Made in platinum, the piece is subdued but will immediately be recognized by a collector who understands high watchmaking. Price for this piece is $110,700. 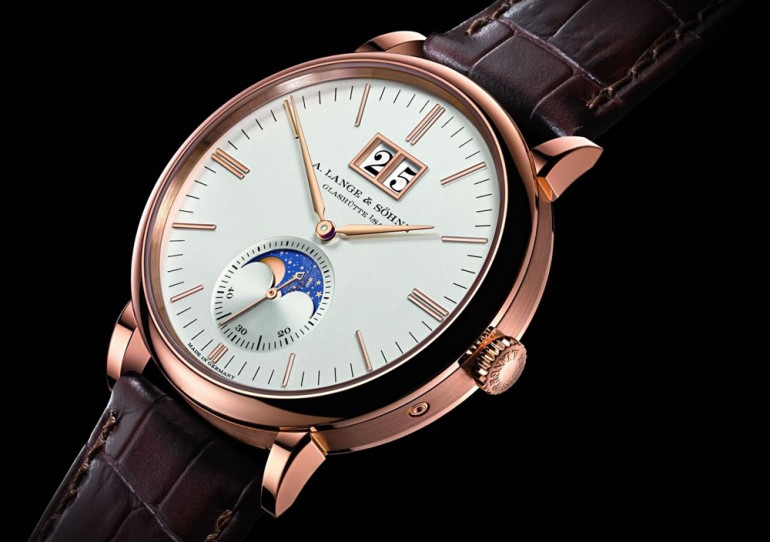 Moon phase– One of the least useful, yet most captivatingly beautiful complications is that of the moon phase. It simply tells you the phases of the moon, which used to find practical use in helping sailors determine the tides, but is not largely an aesthetic feature. Largely a matter of taste, the moon phase is beloved by some collectors while others find the frivolity to be not to their liking.

The A. Lange & Söhne Saxonia Moon Phase watch is one of the most elegant and simplistic pieces that highlights the moon phase complication. The timeless looks of a Lange watch with the “outsize” date windows and that gorgeously made moon phase indicator come together to make a watch that is hard to not lust after. The watch is available in pink or white gold, both of which ask 28,500 €. 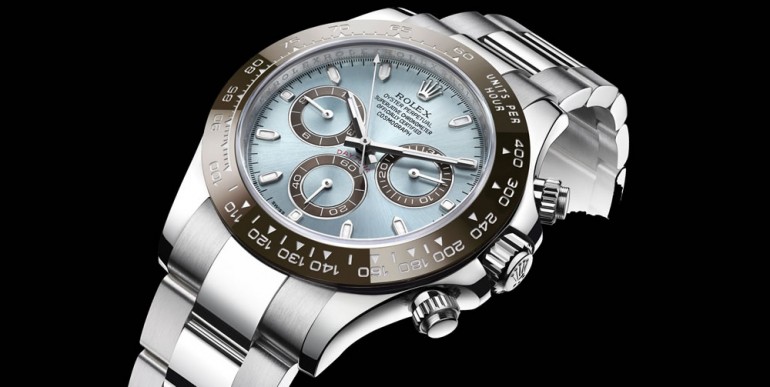 Chronograph– One of the most common complications out there, the chronograph is often mistaken to be any watch that measures time. That would actually be a chronometer, while a chronograph would colloquially simply refer to a stopwatch function. There are several types of chronographs such as flyback chronographs (in which all the counters reset to zero when a second button is pushed), Rattrapante or Split-seconds chronograph (involves two second hands), and monopusher chronographs (simply put, a chronograph with one pusher button). Iconic and used to measure time in races, aviation, and space travel, the chronograph is a complication that has stood the test of time through high-watch making and functionality.

The Rolex Daytona is one of the most recognizable and sought after watches, period. When it comes to chronograph watches it sits at the peak of quality, refinement, and inarguable coolness. The watches come in a range of steel and gold pieces, but one of our favorites is the Rolex Cosmograph Daytona 116506 platinum watch which carries a price of about $73,000. 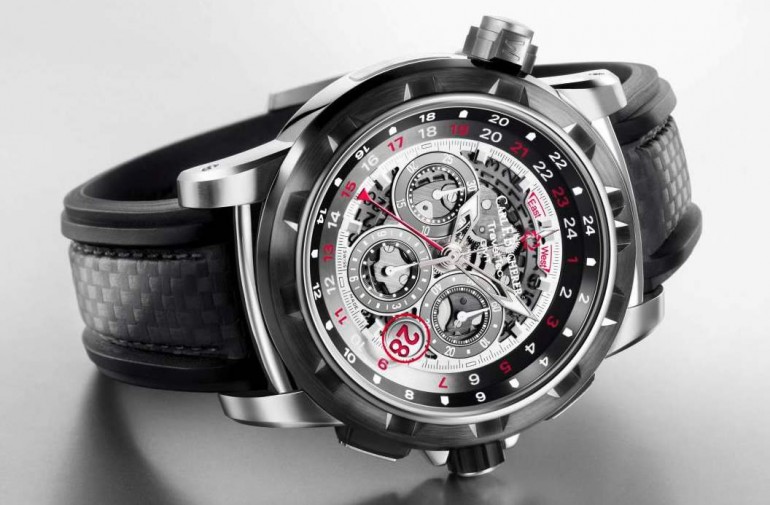 GMT– Many watches are made with travellers in mind. What’s seen as a relatively common activity now was the domain of aviators, the wealthiest travellers, and world leaders. The GMT (Greenwich Mean Time) complication stands out as one of the most popular and is often misunderstood. Technically a GMT watch must have a time zone hand that is on a 24-hour scale, though many frequently label a second 12 hour hand as a GMT. The idea behind the GMT complication is that the wearer will always know what GMT time it is and can easily add or subtract hours to get the time in various time zones.

The Rolex GMT is seen as one of the most ubiquitous GMT watches out there, but someone looking for something that stands out a bit more may choose to opt for the Carl F. Bucherer Patravi TravelTec GMT FourX watch. This skeletonized dial piece is bold and masculine, and you certainly won’t find it on the wrist of every other guy who fancies himself a worldly collector. Price is just about $52,900. 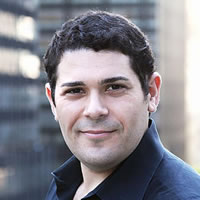 Ariel Adams is one of the world’s leading and most respected experts on timepieces and horology. He is the founder of aBlogtoWatch, the world’s most popular and definitive source for watch reviews and news. He is also the author of The World’s Most Expensive Watches.

Tags from the story
Best-Of