Earlier in this year during the time around Basel World show, there was buzz in the horology world created by Breitling’s new timepiece named Cockpit B50 featuring a new, in-house multifunction quartz movement. The Swiss watchmaker has finally launched the Cockpit B50 watch which looks quite similar to the Breitling Emergency 2 timepiece but without the transmitter and a 46mm case rather than 51mm. As mentioned before, the B50 movement is Breitling’s first in-house multifunction quartz movement and one of the best functions is its capability to be recharged via a cable that has to be connected to the side of the case. The watch will be available in lightweight titanium case natural or black coating based on carbon. 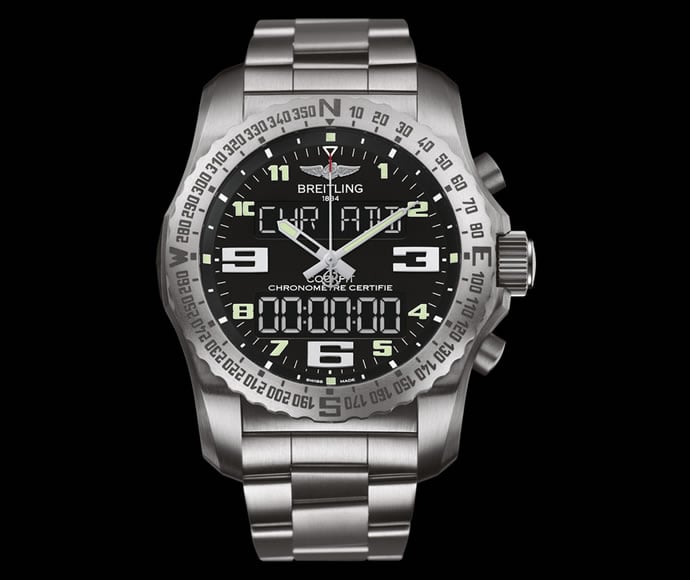 The new exclusive Breitling Caliber B50 thermo-compensated SuperQuartz movement is ten times more accurate than ordinary quartz and certified as a chronometer by the COSC (Swiss Official Chronometer Control). Functions of the watch include a chronograph with split-time and flyback capabilities, a second timezone display, a perpetual calendar, two alarms in buzzer or vibrate mode, a lap timer function as well as a countdown timer with alarm. It also has an electronic tachometer, a countdown/countup system serving to switch directly from a countdown to a timing operation, as well an aviation-style “chrono flight” device which is used to record flight times by memorizing departure and arrival times as well as the date. Another special feature is its use of UTC (Coordinated Universal Time) as the time base. It can be had with the titanium Professional bracelet or the rubber Diver Pro strap with titanium deployant. The watch is priced at $7,290.

Tags from the story
Breitling