Tag Heuer has expanded its greatly diverse Carrera line-up with a new colorful timepiece which can best be described as one of the most modern renditions of the Carrera. Called the Carrera Chronograph Tourbillon Polychrome, it combines a blacked-out case made of titanium and carbon with a skeletonized dial decorated in rainbow colors to create a very interesting iteration. You might remember the Carrera Chronograph Tourbillon Nanograph that was launched in 2019. It came with a case made from black PVD grade 2 titanium. The newly launched Polychrome’s 45mm case closely resembles that of the Nanograph, except for a few updates. The Polychrome’s case is made of grade 5 titanium, while it features carbon lugs and a carbon tachymeter bezel. The crown is also made from black PVD grade 5 titanium and has a rubber insert for added grip, and is flanked by a pair of black PVD titanium pushers. 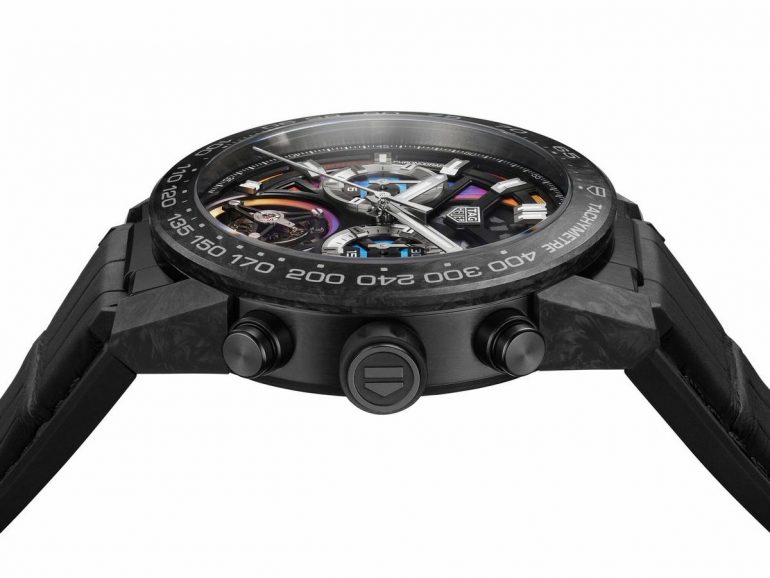 The highlight of the new watch, as the name suggests, is its polychromatic dial. Underneath the black skeletonized dial that features a three-register chronograph layout is a rainbow-colored lower layer that adds playfulness to the timepiece. The dial gets rhodium-plated blue chronograph sub-counters at three and nine o’clock and a multi-hued tourbillon at six o’clock. The rainbow treatment is also extended to the skeletonized central rotor which is visible through the transparent sapphire crystal caseback on the back of the watch. 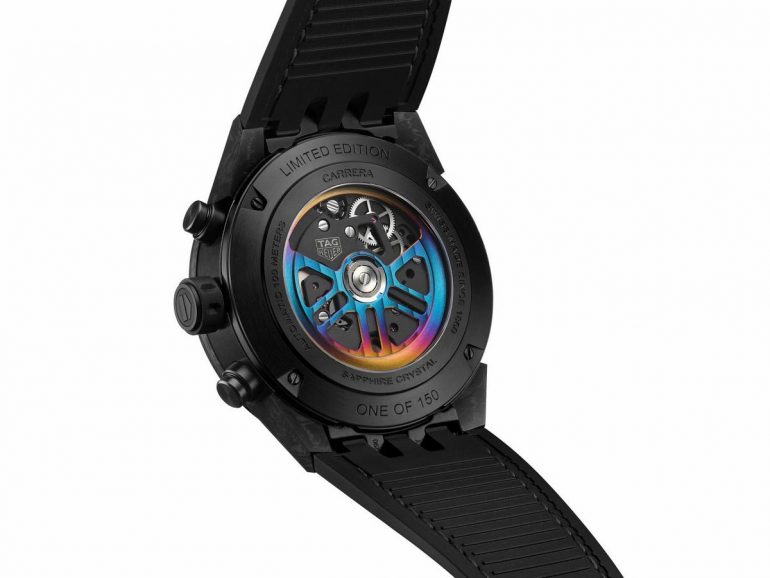 The ultra-vibrant array of colors and its unique finish were achieved by Tag Heuer by working closely with a company that specializes in vacuum deposition PVD treatments. The patented technique deposits metallic oxides in layers of ever so slightly varying thickness which is essential in creating the eye-catching gradual color spectrum. 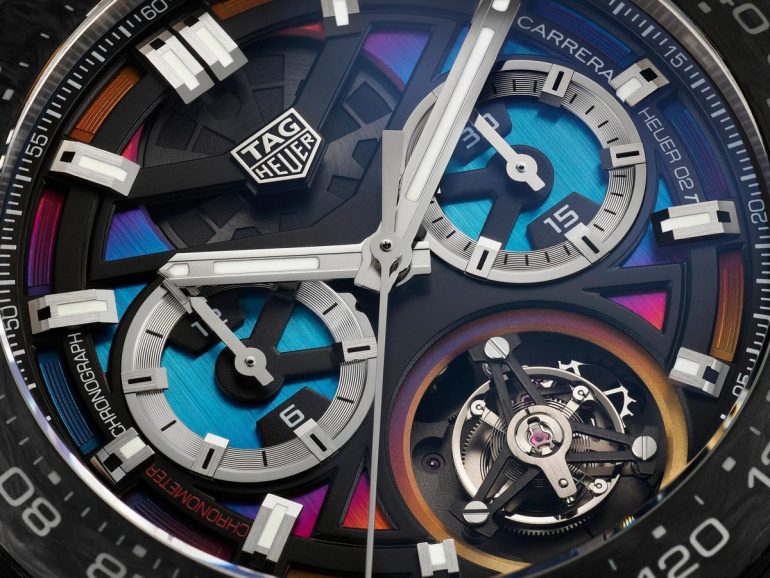 Powering the watch is the in-house caliber Heuer 02T COSC chronograph tourbillon movement which offers a power reserve of approximately 80 hours. The Tag Heuer Carrera Chronograph Tourbillon Polychrome is limited to just 150 examples and is priced at $25,050. 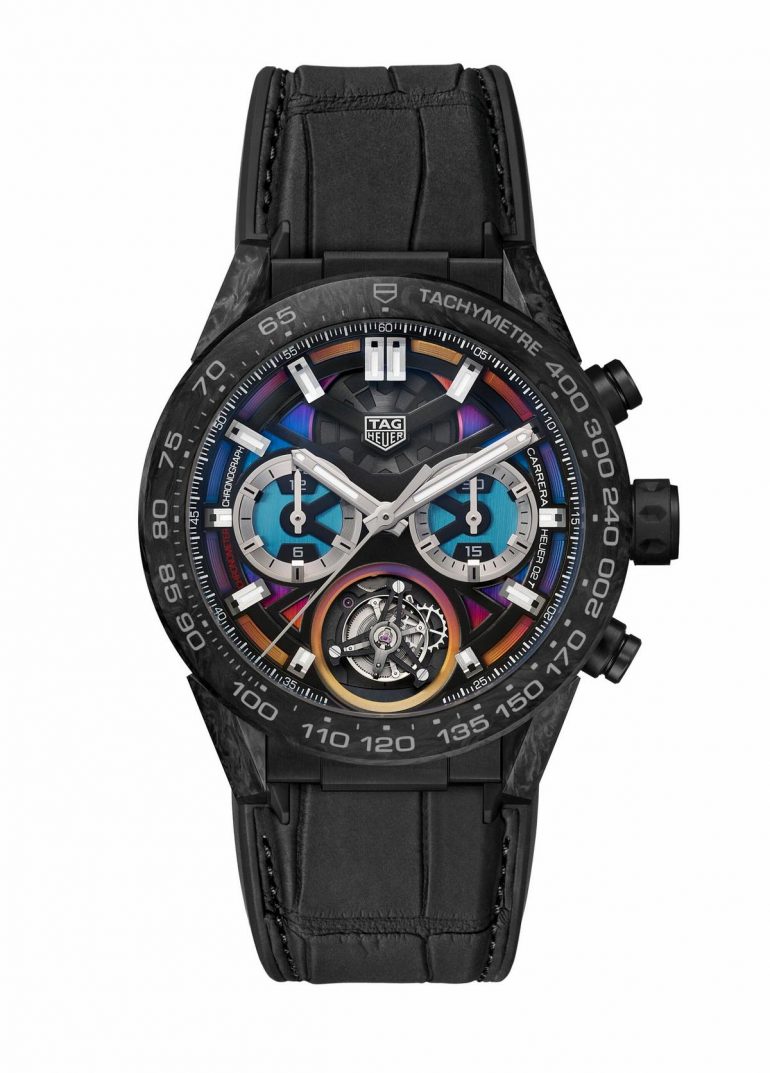 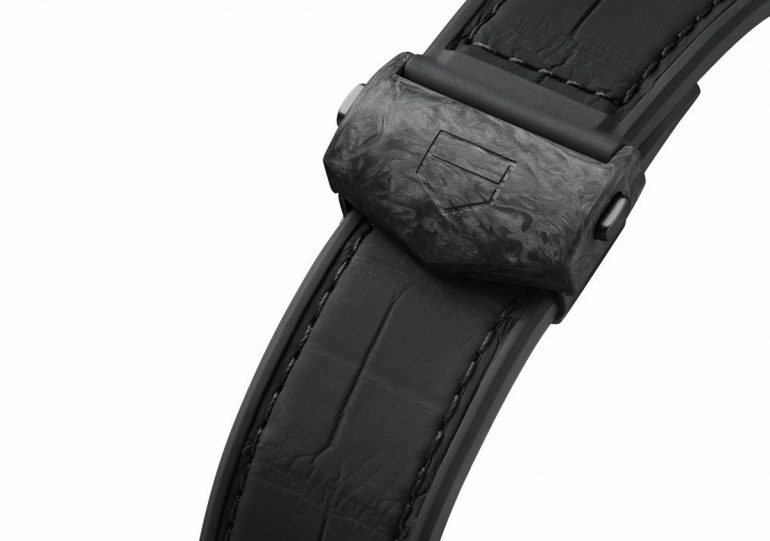