The year 2021 marks the 90th anniversary of the legendary Jaeger-LeCoultre Reverso watch that was originally created in response to a request from British Army officers in India who wanted a wristwatch that could stand up to the beating of a polo match. The Swiss watchmaker is celebrating the icon by creating the most complicated timepiece ever to join the collection. Presenting the Reverso Hybris Mechanica Calibre 185 Quadriptyque, the world’s first wristwatch with four functioning display faces and a total of 11 complications, including a perpetual calendar, minute repeater, indications of the synodic, draconic, and anomalistic cycles. These complications have never been presented together in a wristwatch together and it required a total of 12 patents to craft this masterpiece. The most complicated Reverso took over six years of development and it beautifully showcases the grande maison’s mastery of chiming watches, precision mechanisms, astronomical complications, and ultra-compact watchmaking. 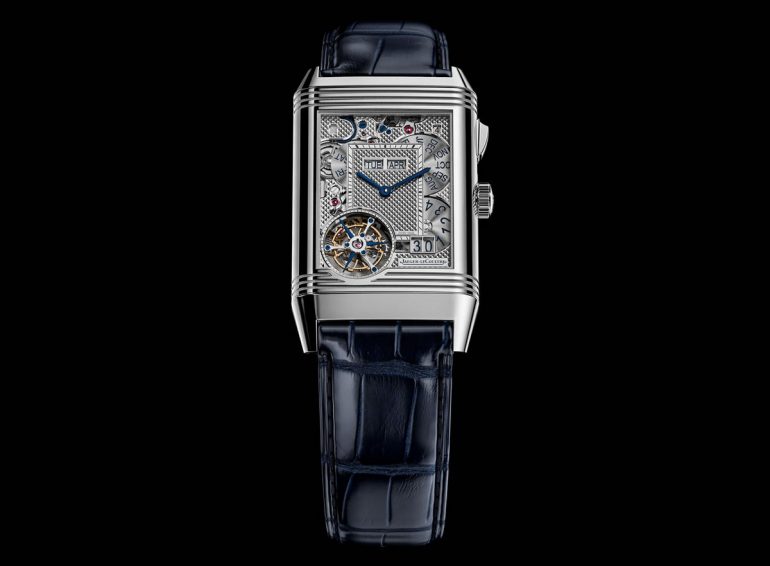 A successor to the incredible Reverso Hybris Mechanica à Triptyque that came out in 2006, the newest to join the watchmaker’s groundbreaking Hybris Mechanica line packs a multitude of complications in a relatively small package with a measurement of 51.2 x 31 mm x 15.15 mm. Jaeger-LeCoultre says ‘the most complicated Reverso is also one of the easiest to wear.’ Let’s start with the recto face that boldly showcases one of the protagonists of JLC’s new masterpiece: the flying tourbillon. located at 7 o’clock, the position of the tourbillion creates a triangle with the indications of the perpetual calendar, giving the recto face a sense of symmetry. The watchmaker even had to create a new system of date display discs to accommodate the flying tourbillon at 7 o’clock. 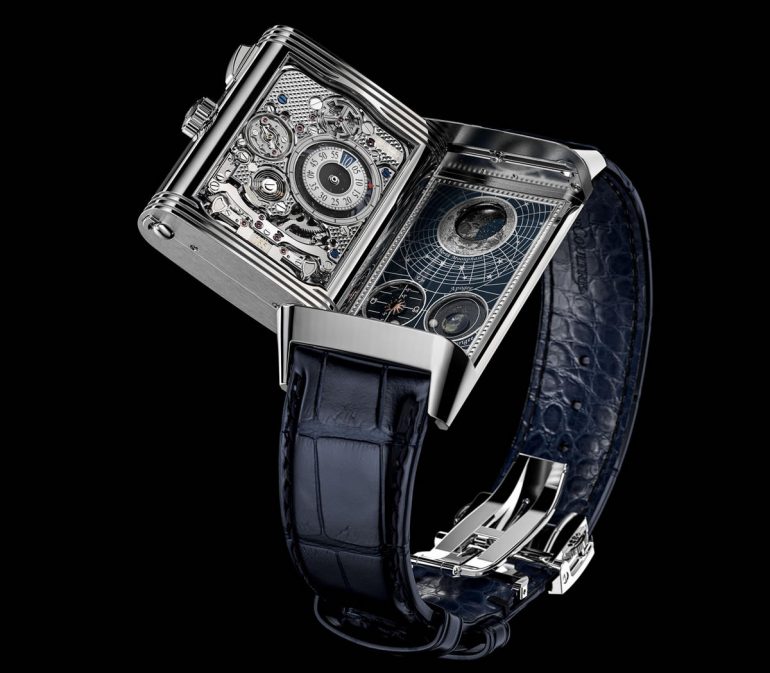 Jaeger-LeCoultre’s expertise in sonnerie wristwatches is unparalleled and the new Reverso is the perfect example to showcase it. Sliding the lever above the crown sets off a melody that tells the time. The symphony of the chiming mechanism is visible alongside a secondary time display that indicates the same time as the recto dial, but in a jumping-hours and peripheral-minutes format. For the Reverso Hybris Mechanica Calibre 185, JLC reengineered the chiming components to create a seamless chime with no pauses in between the hours, quarters, and minutes. As far as the astronomical complications of the watch are concerned, Jaeger-LeCoultre brought together three displays of lunar information — the synodic cycle, the draconic cycle, and the anomalistic cycle. This is the first time ever in the history of mechanical horology somebody has managed to do this in a wristwatch. The indications help predict the next global astronomical events such as supermoons and eclipses. As mentioned before, the Reverso Hybris Mechanica Calibre 185 is the first wristwatch to feature four functioning faces. The exterior face of the cradle has a representation of the phases of the Moon in the Southern Hemisphere which is showcased with a star-flecked sky chart, engraved and lacquered in a gradient of blue shades as the backdrop. 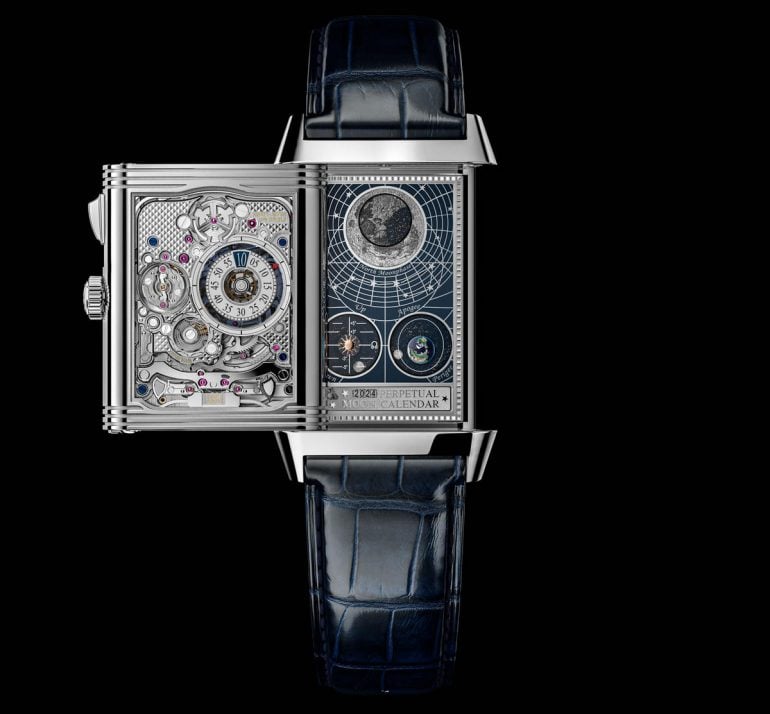 The Quadriptyque is powered by the manually wound Jaeger-LeCoultre Calibre 185 that offers a power reserve of 50 hours. The incredibly complicated watch comes in an even exceptional watch that has a built-in mechanism to properly set all the calendar and astronomical displays of the watch after a period of being unworn. The corrector mechanism of the box eliminates the risk of overcorrecting the watch or damaging the movement. The timepiece is paired with a blue alligator strap that beautifully compliments the white gold case and the blue hands of the watch. The timepiece is limited to just 10 examples it will be priced at $1.35 million each. 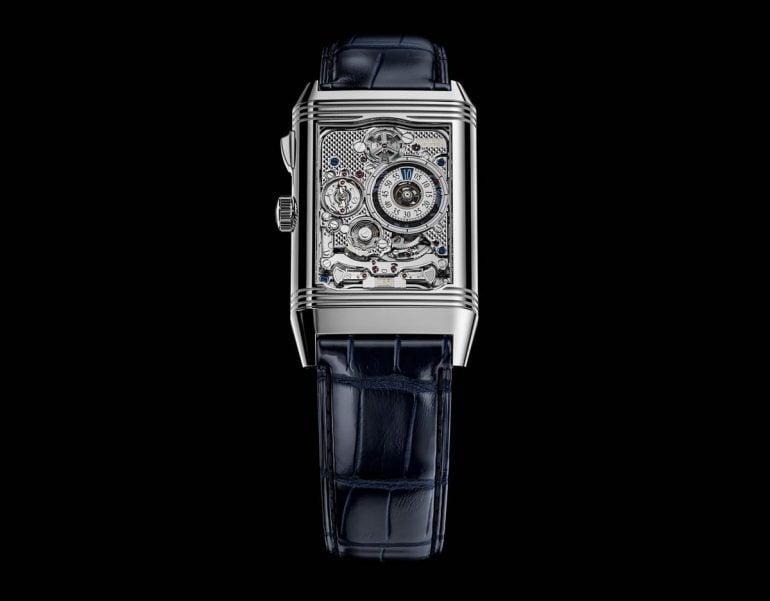 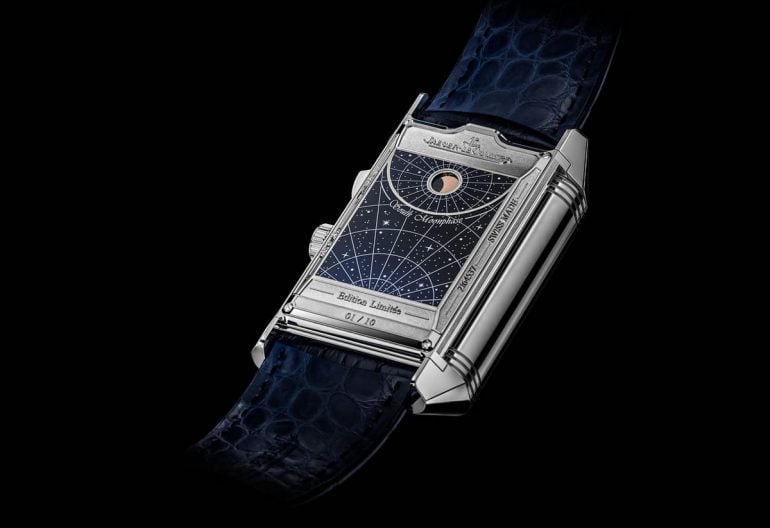