Earlier this year, we reported about Zenith’s ‘Pilot Type 20 Grand Feu’ oozing style and design. But its latest timepiece is oozing something else too- The Rolling Stones tribute. Maker of the El Primero, the first automatic chronograph movement produced in the world has taken the very same, El Primero Chronomaster 1969 to create a 250-piece limited edition series for the legendary rock band’s upcoming ‘14 On Fire’ tour.

The watch is a 42mm steel cased blend of DNA from Zenith and the Rolling Stones. The two chronograph counters, 30-minute at 3 o’clock and 12-hour at 6 o’clock, bear the colors of the original 1969 El Primero model, midnight blue for the former and slate grey for the latter. But where there’s The Rolling Stones, there’s got to be their iconic red tongue and lip logo. In this case, it’s the 12-hour chronograph and the sapphire crystal case-back. The latter is even inscribed with “The Rolling Stones Edition”. 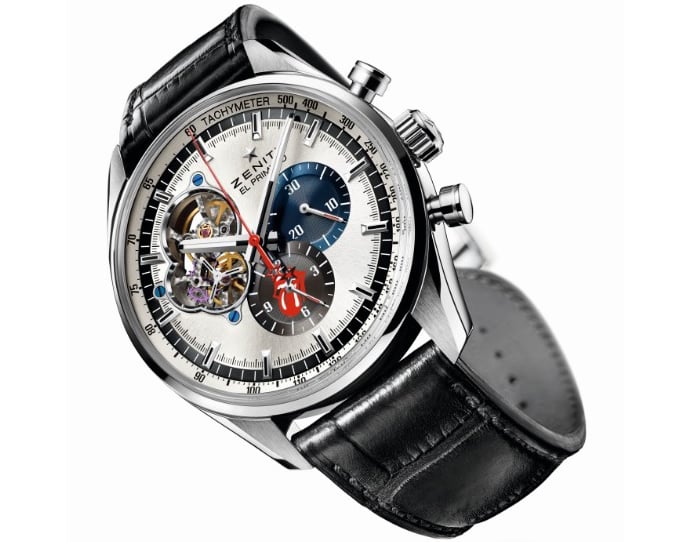 The watch is powered by the El Primero 4061 movement, one of the world’s most accurate mass-produced mechanical calibers with silicium escapement. Revealed by Jean-Claude Biver, Director of the LVMH Group Watch Division and Tom Bennett, CEO for Bravado, Universal Music Group’s global music merchandising division yesterday, it is only the first in a series of limited edition watches by Zenith done together with The Rolling Stones. Needless to say, we’re keeping our music (and inspired merch) loving ears open.