“If an oligarch buys a dinosaur skeleton and puts it in the foyer of one of his mansions, then it is effectively lost to science. Gone, a ghost,” said an exasperated Steve Brusatte, an American paleontologist who works for the University of Edinburgh. The recent boom in the market for dinosaur bones by art collectors, celebrities, and others has led to this outburst among paleontologists. This paleontological Pandora’s box was opened last month when a 10-foot-tall Gorgosaurus skeleton was sold for $6.1 million to an anonymous bidder at auction. For people of science, these prehistoric remains are imperative to study and understand the time they come from. On landing in private hands, the specimens are nothing more than toys that the wealthy care for.

Dinosaur skeletons are treated like fine art, classic cars, or old bottles of whisky. One can admire art, drive a classic car, and drink to an affluent life, but what does one do with dinosaur remains other than boasting? Thomas Carr, a paleontologist from Carthage College in Wisconsin, told DailyMail.com: ‘[Sales like this] are like the last copy of a book being thrown into the fire – when the skeleton was purchased by a private collector, it no longer exists to scientists anymore. Image all we know about humanity is just you and me.
Clearly, that is not enough information to know about everyone.’ Buying specimens and trapping them in vaults is asinine. Their rightful place is someplace accessible to the scientific community, like the esteemed Museum of Natural History in New York City. 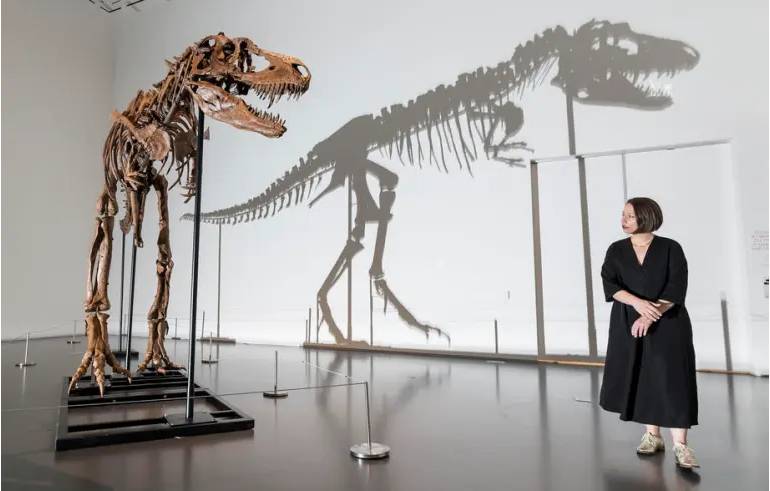 Sotheby’s Senior Vice President Cassandra Hatton begs to differ, “The great museums of the world all began as private collections, and indeed the very concept of a museum was born from the early modern tradition of cabinets of curiosity. These specimens have survived for millions of years and will be around for millions more; while there is a chance they may not be available for study immediately following the sale, they surely will be at some point in the future. Private collectors and research institutions can benefit from each other in ways that are essential to the long-term preservation of fossil specimens and to raise awareness and educate the public about dinosaurs,” shared the publication.


People would buy anything coming from dinosaurs- dung included!
The obsession with dinosaurs and their cadavers is not new-found. As a matter of fact, it is not just dinosaur skeletons that people go after. Digging into our archives, we discovered that in 2008 dinosaur dung was sold at a New York auction for nearly $1,000. That’s approximately $1400 in 2022. The 130 million years old dropping from a Jurassic era dinosaur looked like a rock on the outside and a colorful mineral inside. It seems like the fascination with the world that was will never cease to exist, and if it means spending thousands on dino dung- so be it!
Tags from the story
Skeleton

Live the Italian dream life and get paid too! The sun kissed island of Sardinia…

Hilton has partnered with Voyager to make space-stay more hospitable and luxurious. The hospitality giant…