Christie’s, the iconic British auction house founded in 1766, has been around for 256 years. Despite being around for nearly three centuries, the auction house has only just encountered the largest white diamond ever to come to auction. Dubbed “The Rock,” this 228.31-carat stone, valued at an estimate of $20 million to $30 million, is undoubtedly the largest white diamond to ever be offered at auction. The stone is about the size of a chicken’s egg, to put things in perspective. The pear-shaped diamond is a G color, VS1 clarity stone. It is the largest existing D-Z color pear-shaped diamond ever graded by the GIA laboratory. 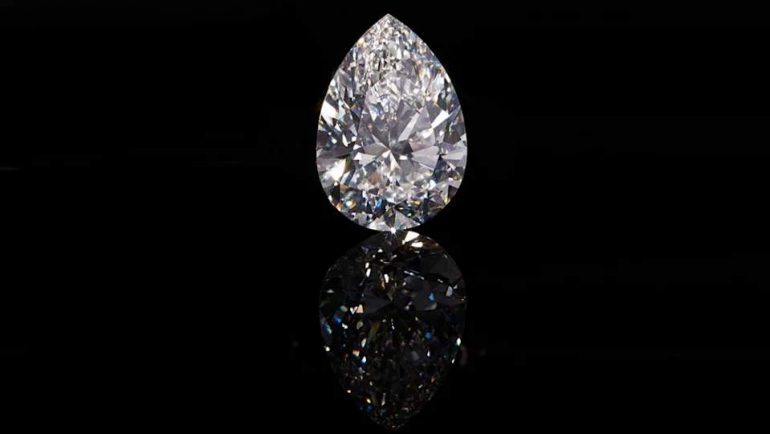 The Rock was mined about 20 years ago in South Africa but is only now coming up for public sale. “Right now, there is a great appetite in the market for diamonds,” says ​​Rahul Kadakia, the international head of jewelry at Christie’s. With the market the way it is—in 2021 there was a huge resurgence both in the art market and the jewelry market—the second owner approached us and said, ‘How would you feel about marketing this for us at a public auction?”

Now that’s not a question one often asks, and it is certainly not an opportunity to miss. “It’s a once-in-a-lifetime opportunity,” he says. “If, after the sale, you come up to me and say, ‘Can you find me another 230-carat diamond?’—well, I can’t.” A few months ago, the De Beers Cullinan Blue, a 15.10-carat gem, also came on the auction block for $48 million. Diamonds are increasingly fetching staggering prices at auctions worth their weight in…well, diamonds. Christie’s also auctioned the largest purple-pink diamond, the Sakura diamond, for $25 million.