We’re all familiar with the concept of expensive jewelry. But unless one goes way back into 2006 when we reported on Grillz Gold and Silver teeth, they may be completely taken aback with the diamond encrusted gold denture designed by Dubai Liberty Dental Clinic. Without doubt its is also the worlds most expensive denture. Dr. Majd Naji, head of the clinic confirmed having received a certificate of its authenticity. A case of classics-always-come-back-in-style, could it be?

“We acquired authenticity and clarity certificates for the gold and the diamonds used in the denture from the International Gemological Institute in Belgium. Ten grams of 24-carat gold were used, in addition to 160 round diamonds that totaled 2.5 carats,” Dr. Naji was heard saying. We wouldn’t recommend wearing it any of your favorite wining and dining places, however. And clinic folk agree, saying the fashion brace is only meant for parties and photos, and is not to be used for eating. 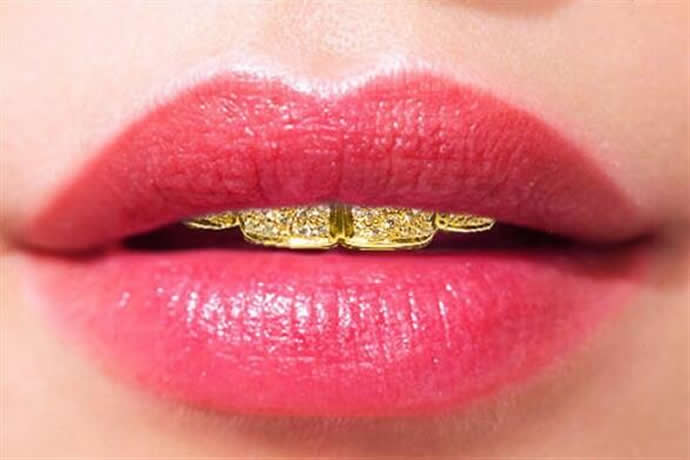 They also said the denture can be ready after two sessions for fitting and the procedure does not require any drilling or filling of teeth. If I were you, I’d still think way more than twice before coughing up the money. The luxury denture has been valued at Dh562000 ($153,000). That makes it what, the most expensive smile in the world, once you wear it? While the Guinness Book of World Records is yet to get back to the clinic on that, one female UAE customer has already purchased the brace. Another Qatari customer has reportedly placed an order too. The clinic added that Dh100000 from each sale will be donated to a children’s charity in the UAE.