Gone are the days when Trump was all about his politics. Of late, it is all about Donald Trump and his properties! It’s no secret the man has many; after all, Trump spent a half-century building his acquisition of Trump-branded properties. It’s been a while we addressed anything going in his favor cause things were precariously sprinting in the opposite direction of his well-being. The Trump luxury real estate brand suffered immensely and lost some of its luster during and after his political tenure. He is also under a $1.1 billion mountain of debt and desperate times call for desperate measures such as selling his beloved luxury hotel in Washington DC.

Even Cristiano Ronaldo succumbed to pressure and slashed the asking price of his $18.5 million apartment in Trump Tower by $10.75 million but to no avail. However, according to a new report, things are looking up for Donald Trump after leaving office in January as sales of his properties have skyrocketed.
The increase in the number of sales can be credited to the cut-rate bargain price tags at the majority of his high-rise towers across the country. As a result, Trump-branded properties have been going down nationally; they are stronger in some states—particularly Florida, where they have actually risen—than they are in the other areas in which he operates, where prices have shown substantial declines.
In the first three months of this year, the number of sales in the roughly two dozen U.S. properties listed on the Trump Organization’s website jumped 72% compared with the same period last year.
But the median prices for these properties, generally condos, had fallen 24% since the beginning of 2016 when Trump ramped up his presidential campaign. Matthew Quint, director of the Center on Global Brand Leadership at Columbia Business School, commented, “Of course, the Trump brand has taken a hit [since his presidency]. He’s a controversial character now. When he decided to run for president, by nature, he was going to change the perception of the Trump business brand.”
Reports show that 39 units were sold in Trump Hollywood during the first three months of 2021, with average prices increasing to $1.03 million per unit compared to last year’s $920,000. 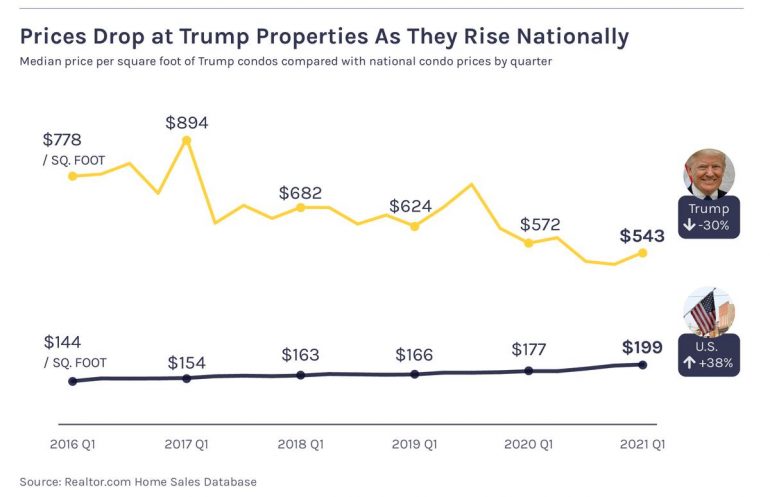 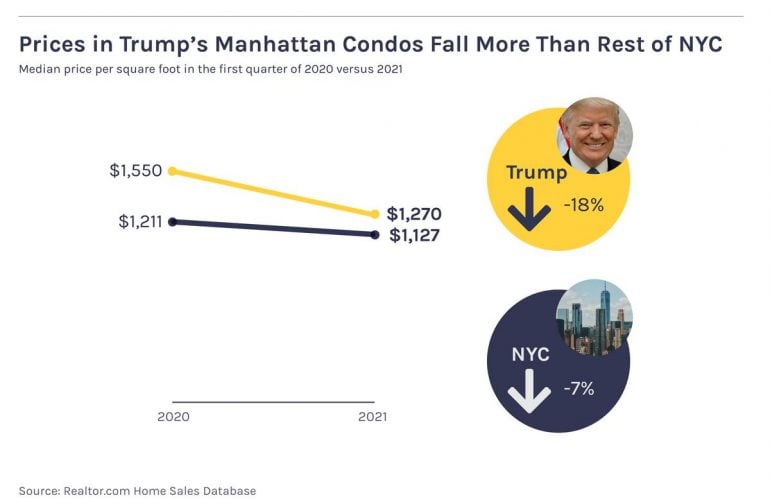