Cristiano Ronaldo has carved a permanent name for himself in football history. The man who started his sports career journey at just 17 years of age by playing for the Portugal team didn’t take too long to become the topmost football player in the world. Today, the man enjoys a very affluent and envious position not only due to his laudable career graph but also the ridiculously expensive things he owns. From earning nearly $108 million in remunerations alone, he commanding as much as $1.6m to endorse a product on Instagram. There is no reason not to call his life the epitome of luxury. But even for the filthy rich and famous, there are things that money cant buy.

Yet another excellent means of transport the loved-up couple has been spotted in the form of the 88-feet long Azimut Grande. The super-yacht comes with five luxury cabins and six bedrooms, according to The Sun. Azimut Grande has wowed her 25.6million followers with her picturesque getaways with the family in tow.


The glam getaways-
When you work hard, you party harder. The iconic pair doesnt shy away from living their best life. From hopping onto their luxury $8 million yachts for many Mediterranean breaks, they always escape to exotic locations. One such fantastic escape was Madeira, where Ronaldo whisked Georgina away last summer, rejuvenating and soaking up the sun onboard their Azimut Grande boat.
The couple that lives life in the fastest lane enjoys making the most f their off-days. They chose to stay in a £10,000-per-night mansion in Majorca with a helipad, tennis court, pool, and spa, as reported by The Sun. Ronaldo shared many heartwarming family images on Instagram along with Rodriguez and the kids. He posted, “It’s time to rest with my loves.” The Juventus striker loves going to Greece with Georgina, and they hit Santorini after winning the Golden Boot of Serie A and the Euros. Endearing family bike trips and winter wonderlands often make it to the couple’s long list of holiday destinations.
The jewels-
The man who makes more than $400,000 per week lavishes his lady love with the finer things in life. Cristiano Ronaldo made his Spanish flame even more eye-catching by gifting his beloved an engagement ring from Cartier said to be valued at $846,300. He indeed went all out to express his love through a symbolic ring ornamented with a large sapphire stone coupled with diamonds. Yes, it became the most expensive a footballer has gifted their Wag ever. Cristiano Ronaldo had bought her the ring by commenting on an Instagram post by Lídia Ramírez Chacón, one of the deputy managers at Cartier.
Needless to say, the engagement ring is the highlight of her incredible jewelry collection that, when combined with beau’s jewels, is a combined total of a whopping $4 million-plus. On one occasion, Georgina outdid her Juventus star partner. She wore $1.5 million worth of diamond jewelry, all on the one hand at the Dubai International Sports Conference. In addition to the baubles on her fingers, her wrists often adorn a $45,500 Patek Philippe TWENTY 4 in 18 carats rose gold watch, as well as three diamond bracelets worth $34,500 each. 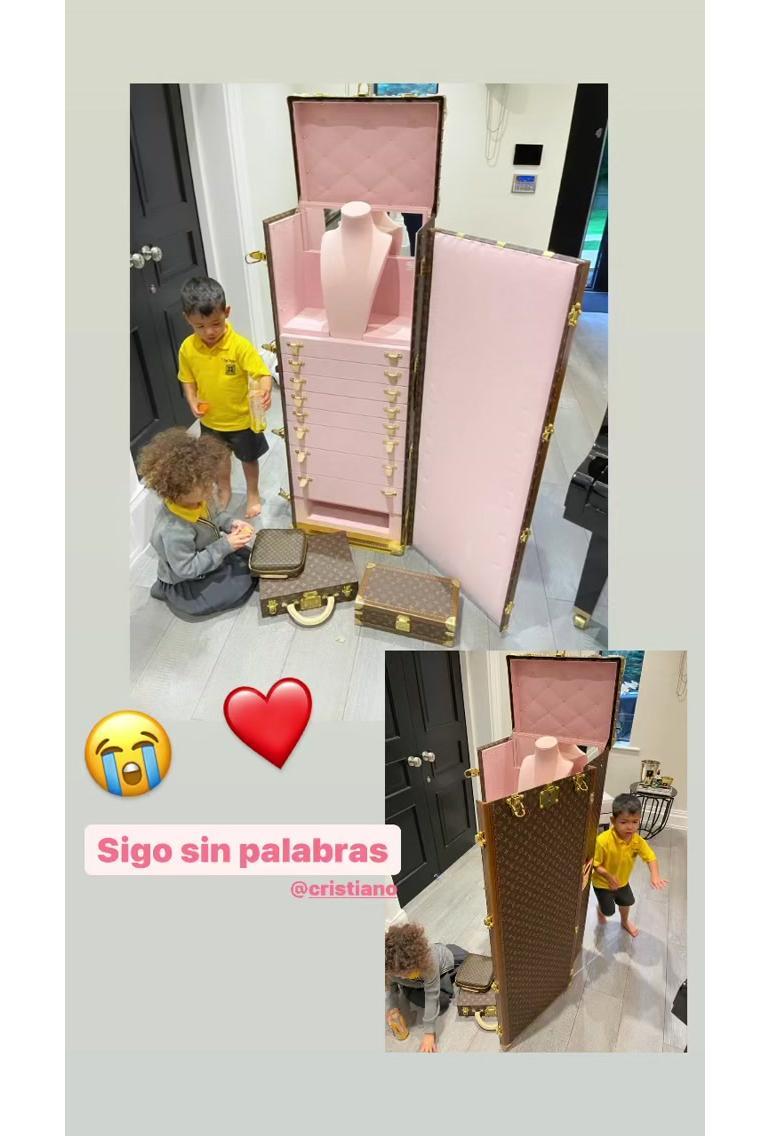 With an assortment of jewels that would put a queen to shame, she certainly deserved the precious gift of Louis Vuitton Malle Vendome trunk. A $149,000 box that literally left her speechless. The chest stands 4ft 6in tall and comes with eight drawers which should suffice to store their jewelry worth millions. LV added a mirror and a bust, making it easy for Ms. Rodriguez to admire her $1,07,500 floral Giardini Segreti diamond necklace. She expressed her gratitude by taking to the gram and posting, ‘I’m still speechless, Cristiano.’ So are we!


The designer garbs-
Georgina is known for her good looks and her gorgeous figure, and she isn’t afraid to flaunt it either. Her lavish lifestyle is mainly reflected in her unending assemblage of designer dresses (head-to-foot Chanel and Gucci) daily, along with the most envious collection of bags (read: Birkin). She posted a picture of her soaking up the sun aboard their luxury yacht wearing a sporty ensemble from Prada. The look totaled to almost $3500, with only her socks costing a staggering $193. She does love her Prada ensembles as she wore it again on a plane sporting both an $860 Prada leisure set and a $66,200 Birkin.
A few weeks ago, the Birkin-clad beauty that she is shared yet another of her prized possessions on Instagram. The nearly $58,500 handbag has been dubbed a ‘work of art’ and ‘heirloom’ by Christie’s and kept the Argentina-born beauty company in Marbella, Spain. She clearly has a special place in her heart and closet for Hermes Birkin bags as she has a collection that would make Kris and Kylie Jenner envious.
A $201,100 crocodile Birkin bag is also part of her handbag collection and has been spotted on the gram. Her feed is filled with eye-catching examples of the valuable Hermès bags. Yet, another eye-popping version was spotted when the Jaca model teamed a long-sleeved shirt from Louis Vuitton with her stunning orange Birkin from Hermès.
The admirable allowance-
When you are Cristiano Ronaldo’s better half, there wouldn’t be a fixed number. You could exhaust your energy, but his money would still last. Reportedly, Georgina gets a pretty generous monthly allowance of $110,200. That may sound like a lot, but considering her drop-dead gorgeous looks and her clothes, it might not be ample. Add to this the four kids she raises with Ronaldo. Considering their high-flying lifestyle, the amount doesn’t seem Earth-shattering anymore though it is admittedly very, very generous. Who can forget the regal $3600 bald Sphynx cat? Obviously, this very regal addition to their mansion won’t nibble on regular cat food. Their pet ‘Pepe’, is also quite a hit on Instagram and at home.
Other than her allowance, Georgina is making a pretty good deal of moolah herself. She takes almost $9500 for each Instagram post she publishes and anywhere around $165,500 for an interview, as shared by corrieredellosport.

Very soon, she will gain even more popularity for her upcoming Netflix documentary titled ‘I Am Georgina.’ the show will obviously focus on her relationship with Cristiano Ronaldo, which began in 2017 while he still played for Real Madrid. “Georgina is totally honest and recognizes in the documentary that her life changed from having nothing to absolutely everything,” said Director of entertainment for Netflix, Spain Alvaro Diaz, according to The Sun.


He added, “I Am Georgina has a strong aspirational component. Georgina went from selling luxury to being gifted it and showing it off on the red carpet. She was a normal young woman whose life changed dramatically one day.”
The mansion-sized love nests-
Ultimately, home is where the heart is. Today the couple enjoys living in the most stunning mansions with state-of-the-art technology and life’s luxuries on their plate. But growing up, things were quite the opposite. Georgina grew up in the tiny village of Jaca, northern Spain, with her Argentine former footballer father, Jorge, and Spanish mother, Ana. The family lived in a tin-roofed house in Madeira. It is eerily similar to Ronaldo’s upbringing, who grew up in a largely working-class neighborhood in a small tin-roofed home.
Today’s situation is a stark contrast where the love birds now nestle in lavish homes in Madrid, Turin, and now Manchester. Their home in Italy was an exceptionally stunning villa outfitted with a state-of-the-art gym. They currently live in a $4.5 million home in Cheshire.
Tags from the story
Birkin, Chanel, Cristiano-Ronaldo, Prada