The feud between Elon Musk and Bill Gates, two of the world’s richest people, has been brewing for a while, but it only got much uglier over the last few days. The latest episode was triggered by an alleged text exchange between Elon Musk and Bill Gates that was leaked online. Screenshots of the texts were shared on Twitter by the account @WholeMarsBlog, asking if they were real. “Sorry, but I cannot take your philanthropy on climate change seriously when you have a massive short position against Tesla, the company doing the most to solve climate change,” Musk supposedly wrote in a text to Gates, according to the screenshots.

So apparently Bill Gates hit up @elonmusk to discuss “philanthropy on climate change” but Elon asked if he still had a half billion dollar short position on $TSLA.

Bill said he hasn’t closed it out, so Elon told him to get lost. No idea if this is true lol pic.twitter.com/iuHkDG3bAd


The get-lost text by Musk is preceded by the Tesla CEO asking Gates if still had “a half billion dollar short position against Tesla.” In case you don’t know what is a short position, it’s basically betting a stock’s value will fall by selling a borrowed stock with the intention of buying it back later at a lower price. “Sorry to say I haven’t closed it out,” Gates replied, according to the screenshots. “I would like to discuss philanthropy possibilities.”


It came as a shocker when Musk confirmed by tweeting that the text conversation was in fact real but he was not the one to leak them. The world’s richest person added they must have gotten out “through friends of friends.” Furthermore, he wrote: “I heard from multiple people at TED that Gates still had half billion short against Tesla, which is why I asked him, so it’s not exactly top secret.” Things got really distasteful Musk also tweeted a meme body-shaming Gates in which a picture of the Microsoft founder is positioned next to the pregnant man emoji, along with the caption: “in case u need to lose a boner fast.” 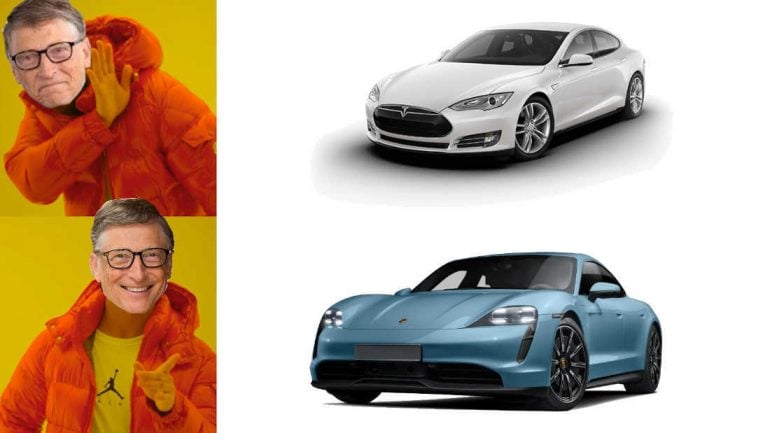 The two billionaires have been openly feuding for around two years which was started with what Gates said during an interview with YouTuber Marques Brownlee at the beginning of 2020. The Microsoft founder said that while Tesla has helped drive innovation and adoption of electric vehicles, he bought a Porsche Taycan as his first-ever EV. This infuriated Musk who took a jibe at him by claiming his conversations with Gates have always been “underwhelming.” The two also locked horns over topics like Covid-19 and even colonizing Mars. Well, Musk in his latest tweet has said he’s “moving on” from “making fun” of Bill Gates.