Over the last two decades or more, we have seen quite a few well-known celebrity petrolheads turn to climate activism and become vocal supporters of a carbon-zero world. Many of them have willfully traded their prized fossil-fuel-powered masterpieces, or at least permanently turn them into showpieces, for electric cars. Bill Gates is one of the leading names in that list of renowned personalities. In 2006, the Microsoft co-founder gave up his active participation in daily operations at the company to dedicate more time to philanthropy and has since emerged as a leading global proponent of climate change. The man who occupied the top spot on the list of the world’s richest people for decades is known for leading a very simple life and has rarely been seen indulging in hedonistic pleasures, except for one thing. Cars! Gates is a noted automobile fanatic and has spent a fraction of his fortune collecting some of the rarest cars. However, earlier this year, Gates announced on a Podcast interview that he has decisively transitioned towards electric mobility and added a Porsche Taycan to his collection. This didn’t go well with a lot of Tesla fans and Elon Musk, who saw it as an insult, birthing one of the biggest celebrity feuds of this year that continues to rage on. However, Gates’s choice should hardly come as a surprise, given that he has been one of the biggest Porsche fanatics on this earth for over forty years, and there are some fascinating stories to come from it. This week, we talk about Bill Gates’s love for undying Porsche.

It all started in 1979 when Gates bought himself a Porsche 911 Turbo just a few years after founding Microsoft and when he had started making big money off it. Even though it was a used car, it sparked Gates’s love affair with Porsche. The tech mogul was often seen pushing the Porsche to its limits when Microsoft was based in Albuquerque, New Mexico, in its early years, which also led him to trouble with the law. There was even an incident when Gates was arrested on one of his many high-speed excursions with the Porsche on the city’s desert roads. It was Paul Allen, co-founder of Microsoft, who had to bail him out of jail. But that didn’t end there. When the company moved from Albuquerque to Seattle, Gates got three speeding tickets, out of which two were from the same cop who was trailing him. It is said that Gates held on to the 911 Turbo till the ‘90s, after which it changed hands and ended up making its way to Austria. Almost a decade back, the Porsche ended up on the auction block in Austria, and it featured a re-painted body and an overhauled engine. It ended up selling for $80,000. 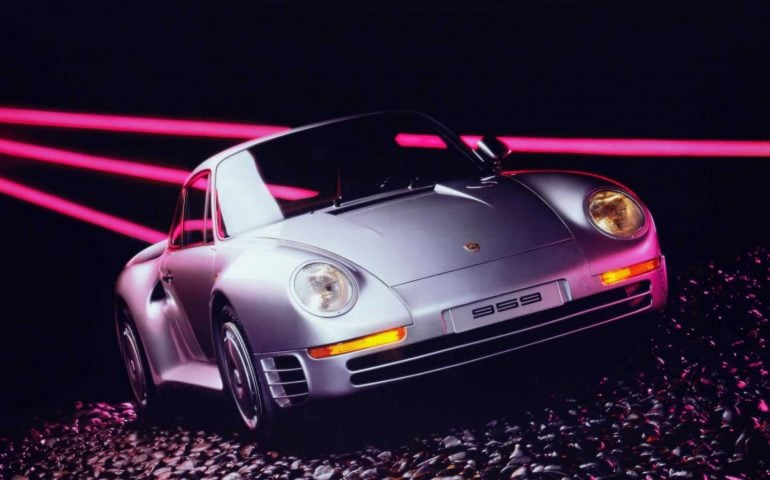 The Microsoft Co-Founder added several Porsches to his collection over the years, including a Porsche 964 Carrera Cabriolet. However, the most notable of them all is the infamous Porsche 959 supercar, which led to the change of legislation in the US thanks to the super-influential tech billionaire. But before we move to Gates’s story, it’s important to talk about the supercar, its importance in automotive history, and why it was so special that Gates fought a legal battle for years and lobbied hard to tweak the laws in the country. The Porsche 959 is arguably the most exciting and technically advanced supercar ever created. It was way, way ahead of its time, with many experts firmly believing that the 959 is the foundation on which most modern supercars and hypercars are created. But, there’s a good chance that you might have never heard of it – more of that later. Built with the agenda of creating the ultimate 911, the Porsche 959 was meant to dominate the world of Group B rally racing. Work started in 1981 to build the race car and the FIA homologation regulations requiring at least 200 units of a road-legal version to be produced. The Group B rally racing was dominated by all-wheel-drive cars. Porsche wanted to build the 959 as a technology demonstrator and prove how far ahead of the game the German manufacturer was. 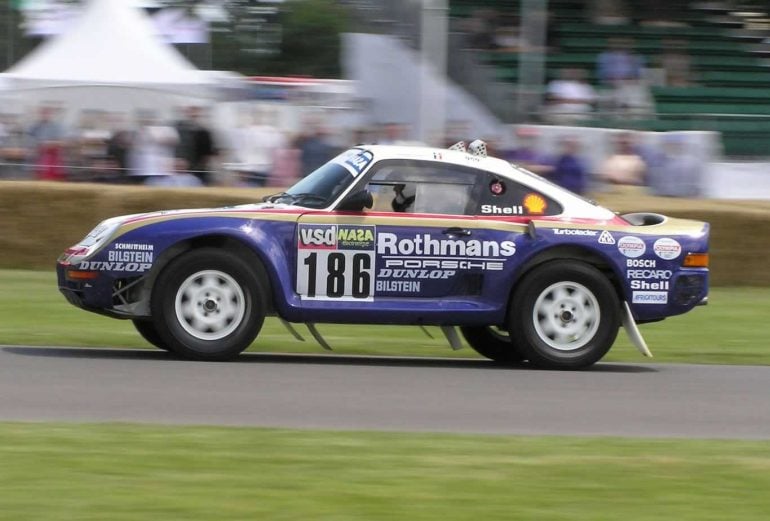 However, Porsche took a little longer than anticipated to build the rally car, and the Group B race was banned for good right before the work was completed. This forced Porsche to change tracks and focus on building the most innovative supercar of its time. In 1985, Porsche finally revealed the 959. Interestingly, it did go rallying. After a failed campaign at the Paris-Dakar rally in 1986, the supercar claimed first, second, and sixth the following year. But Porsche had managed to build something far greater and historically significant. It was the first road car in history to have a proper shot at breaching the hallowed 200mph speed barrier. Although it was powered by a relatively small engine with a displacement of 2849cc, the flat-six with water-cooled heads managed to pump out 444 horsepower and 369 lb-ft of torque. It was capable of sprinting to 60 mph in 3.6 seconds, which is fast even today’s standards. Porsche claimed an official top speed of 197mph, making it the world’s fastest production car of its time. But it was a lot more than just its top speed. It had features that were unheard of at that time.

Instead of steel, the 959 was built using aluminum and Aramid (Kevlar) composite along with using a Nomex floor. It also used a revolutionary Porsche-Steuer Kupplung (PSK) all-wheel-drive system that was capable of dynamically changing the torque distribution between the rear and front wheels. It even had a column stalk to electronically alter the transmission program to tackle different weather conditions – sun, rain, snow, or gravel. Even over the top was its transmission with automatic ride-height control and a rotary switch to manually adjust damper settings. Mind you; we are talking about a car from the ‘80s. It was the first supercar of its kind that can obliterate its competition on the race track, can go rallying on treacherous conditions with minimal changes, and be used comfortably as an everyday car. It was revolutionary. But, then came the Ferrari F40. 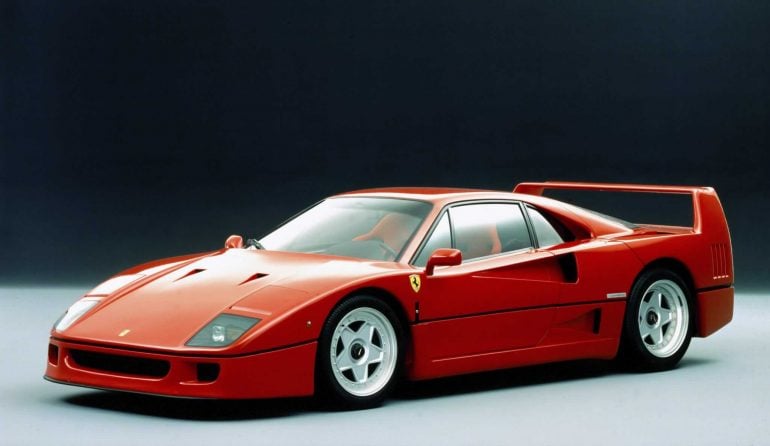 Enzo Ferrari and the folks at Ferrari were not thrilled about the Porsche 959 and its claim on the title of the ultimate supercar. Ferrari’s existing machines, including the Testarossa and the 288 GTO, were no match for the German supercar. And that’s when Ferrari built the legendary F40, creating one of the most exciting automotive rivalries of all time. Unlike the 959, the F40 was created on the formula of old-fashioned race car engineering and jaw-dropping looks. The Ferrari F40 became the first to cross the 200mph figure and grabbed everyone’s attention across the world, eventually stealing the 959’s thunder. It was soon reduced to being one of the most underrated and forgotten automotive heroes. However, those who knew cars were aware of how special the 959 was and became diehard fans of the engineering marvel. One of them is Bill Gates. 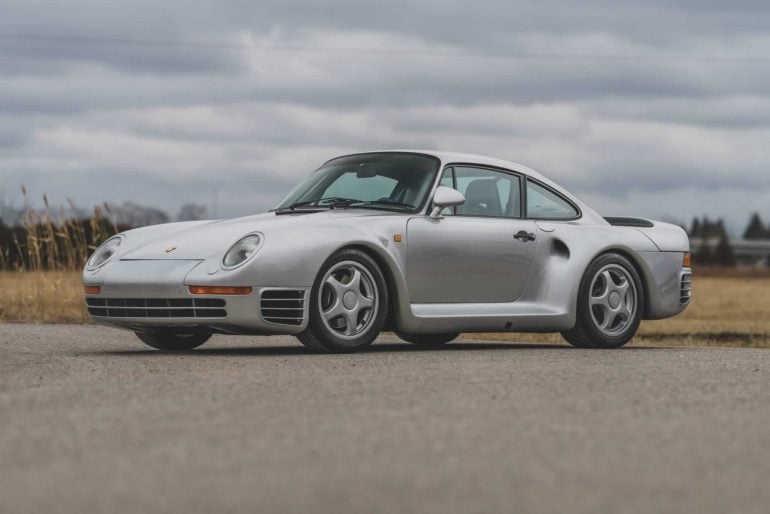 It is said that Porsche lost close to $500,000 for each 959 it sold, which was made worse by the fuel crisis and Porsche’s declining financial situation. As a result, Porsche saw no opportunity to meet the crash-testing requirements and get EPA approval to sell it in the US market. Regardless, Gates ordered a 959 from Porsche, which was immediately impounded on reaching the United States. The German supercar sat in the Customs Service of San Francisco for 13 years! During that time, the billionaire explored all legal options to no avail. But there were three very influential Porsche nuts and 959 owners who wanted to drive their prized 959 in the States. They were Bill Gates, Paul Allen, and comedian Jerry Seinfeld. The trio came together along with few others to use their lobbying resources, position, and even money to tweak the federal laws. An exception was added to the importation laws under the Bill Clinton administration, which came to be known as the “Show and Display” amendment to the United States Federal Motor Vehicle Safety Standards. According to the amendment, cars with historical or technological significance for show and display purposes in the United States can be imported without passing crash, emissions, other crucial tests, or had less than 500 units produced. The law not only led to the opening of the doors for the Porsche 959 but also a range of foreign, exotic cars from Europe and Japan. Thanks to the law, Gates was united with his beloved 959, and the tech billionaire till recently was often seen cruising around in the silver Porsche. The sheer extent Bill Gates went to get his hands on the 959 is just staggering and makes for one of the most interesting automotive stories. No kidding. He loves his Porsches!

Tags from the story
Bill-Gates, Porsche