The Porsche Taycan is finally here and is ready to conquer the growing EV market with its revolutionary technology and jaw-dropping performance. Revealed just ahead of the 2019 Frankfurt Motor Show, the will be initially available in Turbo and Turbo S variants, with more versions expected in the future. Here are five things that make the 2020 Porsche Taycan not just a new model but a groundbreaking product meant to disrupt the market. 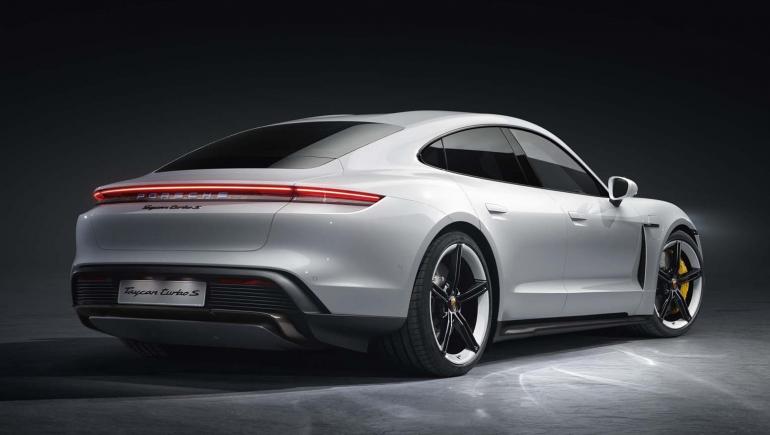 Aesthetics
Porsche in its usual fashion didn’t hide its first fully-electric car under heavy camouflage wrap during the testing phase, which gave us a fair idea of how the final production variant is going to look. And the good news is that it didn’t stray away much in terms of exterior design from the original Mission E concept that was first introduced in 2015. It shouldn’t come as a surprise that Porsche stuck with the 911-esque styling for the Taycan – something it has done with all its products in the line-up – but there is more to it than meet the eyes. Despite sharing styling cues with the iconic sports car adapted into a four-door coupe form similar to the Panamera, Porsche had to start from scratch and engineer everything its electric propulsion. Every millimeter of the EV has been designed to make it one of the most aerodynamic series production cars ever made. Thanks to the sleekness of Taycan’s design, it has a drag coefficient of just 0.22, lowest for any Porsche car till date. 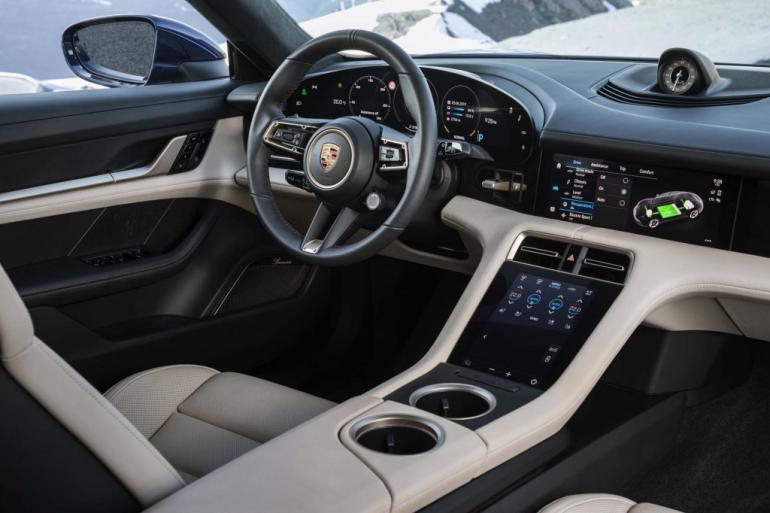 Interior
At first glance, Taycan’s cabin might look familiar with a lot of its styling and features appearing to be similar to that found on the latest Porsche models. However, look closely and you’ll notice that the EV’s interior is in fact revolutionary. Porsche has made sure that the cabin has a futuristic appeal to it without ruining the aesthetics and its luxury quotient. There are barely any physical buttons and most of the controls can be operated by the touchscreen displays. The instrument cluster is entirely digital and is made up of a horizontally-oriented curved screen – an industry first. The hood-less display mimics the traditional Porsche 911 dials and can be fully personalized according to the driver’s preference. The dash consists of three big-sized displays with user-interface unique to the Taycan. 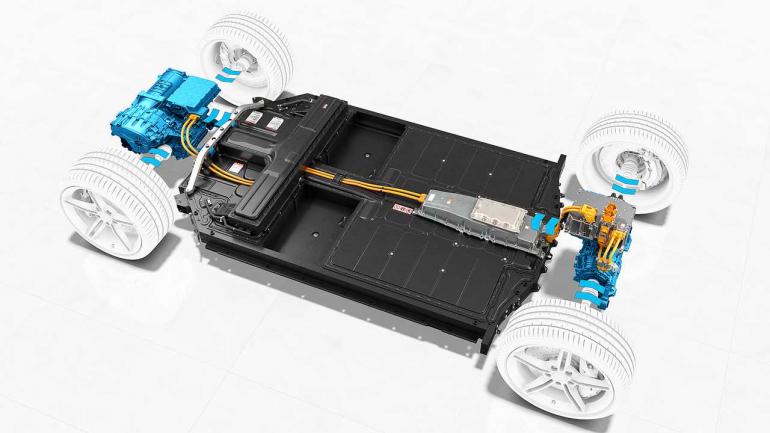 Two-speed gearbox
The Porsche Taycan is powered by two electric motors located on the front and rear axles. Almost all production EV uses a single-speed transmission, but Porsche did something unique with the Taycan. The rear electric motor is coupled to a two-speed transmission, which was developed in-house. According to Porsche, the transmission helps with both top speed and efficiency. One of the gears is meant for that crazy off-the-line acceleration which helps it go from 0-60mph in just 2.6 seconds, while the other gear is for efficiency and top speed. The second gear has a ration of 8:1 and helps the electric sports sedan hit a top speed of 161mph. 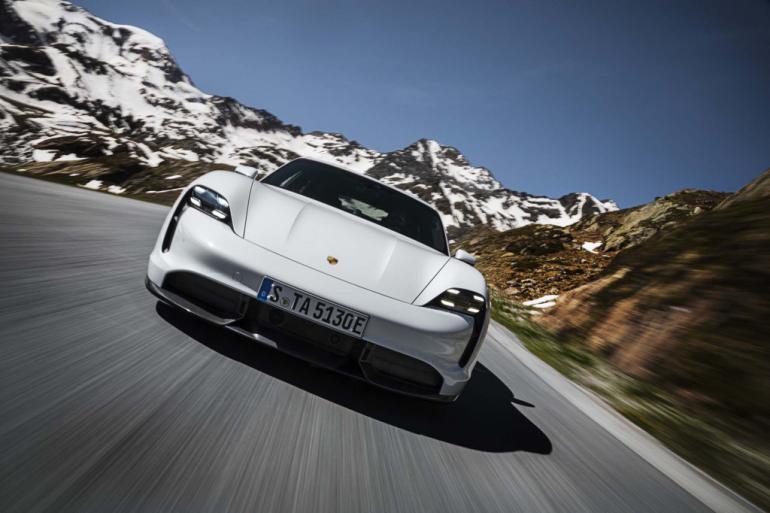 Blistering performance
The Taycan will be available in two initial models: Turbo and Turbo S. The Turbo has 616 horsepower, but it increases to 670 HP with overboost and in launch control, which helps it to do the zero to 60 mph sprint in a claimed 3.0-seconds flat with launch control, and run a claimed 11.1-second quarter mile. The Turbo S, on the other hand, gets 616 horsepower, which maxes out at 750 HP with launch control and overboost. It is claimed to have a 0 to 60 mph time of 2.6 seconds and runs a 10.8-second quarter mile. But the Taycan is a lot more than just straight-line speed and has proper sporty handling to perform well on race tracks. In fact, it lapped the Nurburgring in 7:42 minutes. 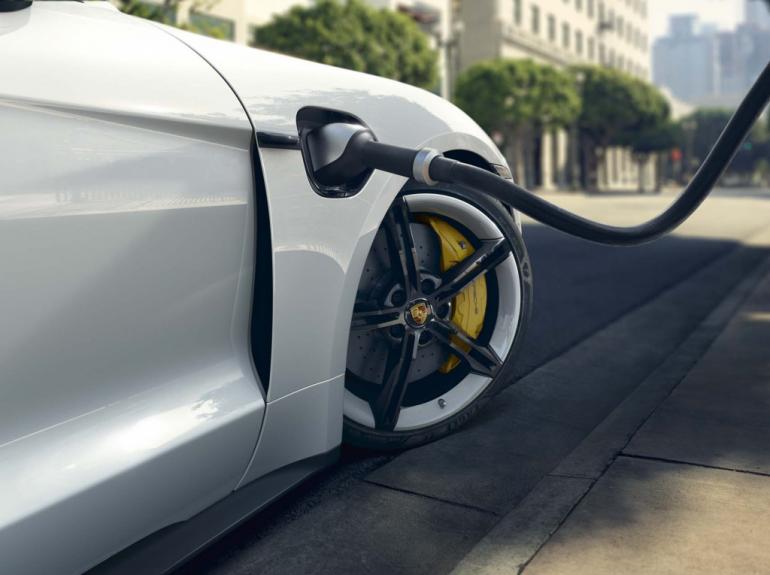 Quick charging
The biggest concern with electric vehicles is the range and the Taycan Turbo has a max range of 450 km (roughly 279 miles) on the European WLTP testing cycle, which falls short of the Tesla Model S. However, Porsche went with an 800-volt architecture for the Taycan, which is meant to be an improvement on current 400-volt systems on the market. According to Porsche, it allows for quicker charge times: It can charge from 5 percent to 80 percent charge in 10.5 hours on a 9.6-kilowatt charge connection, 1.5 hours on a 50-kilowatt connection, or 22.5 minutes when charged at 270 kilowatts. But that’s not all; the Taycan is able to regenerate up to 265kW of power – almost double that of most electric cars. Porsche says 90 percent of the Taycan’s deceleration will be by regeneration and the electric sports sedan will barely need the massive brakes for the stopping.

Tags from the story
Interesting-Facts, Porsche