What do you do when you are one of the richest people on this planet with billions of dollars at your disposal? Obviously, you might end up spending frivolously to fulfil all your desires without having to think twice, right? Well, at least that’s the case with Sheikh Hamad bin Hamdan al Nahyan who spent a lifetime amassing hundreds of rare and quirky automotive creations, including some that hold world records. Sheikh Hamad is a member of the ruling royal family of the United Arab Emirates and is said to have a personal net worth of over $20 billion.

His family has ruled Abu Dhabi for more than three centuries, and most of his wealth comes from his family’s control over Abu Dhabi’s oil deposits, which comprise 95% of the UAE’s oil. While the billionaire sheikh prefers to stay relatively under the radar, his exorbitant spending to build some wild creations often ends up grabbing headlines. It seems the 74-year-old loves to live by the motto “go big or go home,” which is clearly evident by his massive car collection split across 4 museums spread across the UAE and Morocco. Here are some crazy yet fascinating facts about Sheikh Hamad.
A quirky request that earned him the nickname “Rainbow Sheikh”
Sheikh Hamad seems to be a big fan of all the colors of the rainbow as you’ll find many cars from his collection decked out in a distinct rainbow paint job, including a Fiat 500. However, back in the early 1990s, he famously asked Mercedes to build him an entire fleet of S-Class finished in every color of the rainbow as a wedding present, which ended up earning him the nickname Rainbow Sheikh. Sheikh Hamad apparently takes this nickname very seriously and you’ll find rainbow murals at different places in his museums.
Sheikh Hamad’s gigantic car collection doesn’t have a single supercar
Despite the fact that the billionaire sheikh owns countless automobiles that are on display at 4 different museums, you’ll be surprised to learn that his massive car collection doesn’t have a single supercar. The only sporty car in his collection is a first-gen Porsche Boxster. That’s correct! He can afford the world’s rarest and most expensive supercars but he chooses not to indulge in them. Instead, Sheikh Hamad loves quirky off-road vehicles, supersized replicas, American classics, and Mercedes-Benz cars. What’s fascinating is that one-third of his collection is made of Mercs while he doesn’t own a single car built by Audi or BMW. 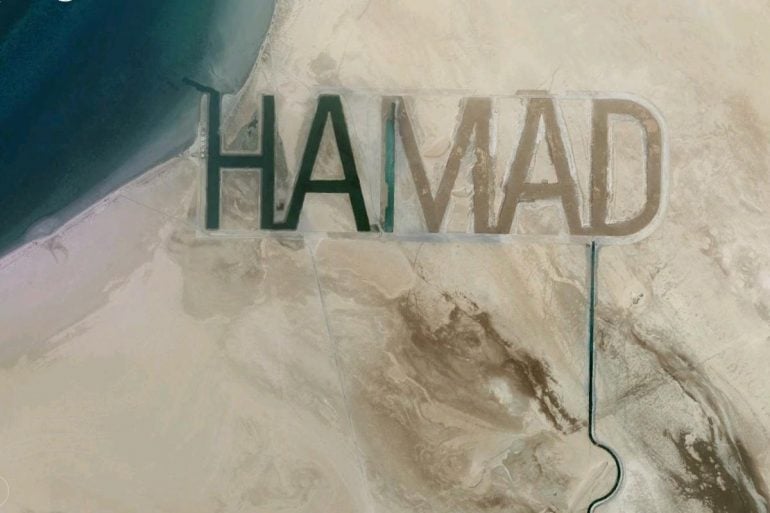 An obsession with supersizing that went beyond automobiles
Sheikh Hamad has an obsession with making things big, which is clearly exhibited by some of the gargantuan scale replicas of various automobiles. However, more than a decade back, his interest in supersizing slipped over to a very different kind of project. The billionaire sheikh had people carve his name on a mostly-uninhabited island near Abu Dhabi called Al Futaisi, forming waterways in the sand.


The winding series of canals were carved into the southern end of the Island to spell out his first name. Measuring almost two miles in length, the inscription was so large that it could actually be seen from outer space. However, the letters mysteriously vanished a few years later. It still remains unclear why Sheikh Hamad hastily had it removed.
A creator of some of the most unique automobiles on this planet
Sheikh Hamad has several world records to his name, which include the Guinness World record for the largest collection of 4×4 vehicles with 718 cars. While his Pyramid-shaped Emirates National Auto Museum houses more than 200 vehicles, he also built a dedicated museum for off-road vehicles in Sharjah where you can find some of the craziest automotive creations designed and built by the billionaire sheikh himself. Here are some of them:
1.Replica of the world
One of the most bizarre creations which are part of the sheikh’s collection is a giant globe caravan. You can either consider it as a supersized model of our planet with wheels or a 1:1,000,000 replica of the world. It is not self-propelled and needs a towing vehicle to be moved around. But what’s even more strange is that there are nine guest rooms and nine bathrooms inside the round caravan.
2.World’s largest running Jeep
Sheikh’s eclectic collection includes a gigantic replica of a World War II-era Willys Jeep that was crowned the world’s largest motorized car by Guinness Records in 2010. It is 21-foot-tall, making it too big to fit inside the pyramid-shaped museum. While the exact specifications were never published, it is powered by a relatively tiny engine that can be seen behind the grille.
3.World’s biggest SUV
In addition to the world’s largest motorized car, Sheikh Hamad’s bizarre collection is also home to the world’s biggest SUV. Called the Dhabiyan, it’s a 35-foot, 10-wheeled automotive behemoth that was hacked together from several different commercial vehicles and a military truck. It’s so massive in size that it can make a Ford F-150 look like a toy car.
4.World’s biggest pickup truck
Obviously, the Sheikh also owns the world’s biggest pickup truck which is a supersized replica of a 1950s Dodge Power Wagon that’s only eight times the size of the real thing. Interestingly, the scale of the construction was limited only by the size of the wheels that the Sheikh could get. It rides on wheels that were used on a machine for transporting oil rigs. The truck is also a rolling luxury villa with four large, air-conditioned bedrooms, a living room, bathrooms and even a patio.
5.Supersized Hummer H1
I’m sure no sane person will find the Hummer H1 small in size. However, Sheikh Hamad’s obsession with making things bigger saw the creation of a giant replica of the SUV with military roots. The incredible vehicle was revealed earlier this year and was awarded the world record for the largest Hummer in existence. It is three times bigger than a normal Hummer H1 by scale and 27 times by volume.
Tags from the story
Abu-Dhabi, Billionaires