With jet-tracking teen Jack Sweeney’s Twitter account ElonJet barred for good, we wonder what his 530k subscribers will now look forward to. Reddit comes to the rescue of the curious ecologists with a new subreddit dedicated to the Elon Musk jet tracker. In only three days, the page has amassed a whopping 200,000 members. Even with his account suspended, this information must’ve put a smile on Sweeney’s face and a frown on Musk’s.

The new location, r/ElonJetTracker, pinned links to all of Sweeney’s ElonJet accounts across social media platforms on top of the page. “Given the latest attempt to hide this corporate jet’s whereabouts, which is in part funded by US taxpayers, this community will help to keep this publicly available information easily accessible,” the subreddit’s “About” section stated per Business Insider.
This new address houses it all, from Musk’s tweets about the current location of his jet to the billionaire’s hypocritical standpoints on free speech. The tides turned against Tesla CEO after publicly declaring last month that he would not ban the account @elonjet, despite being considered a safety risk, only to prove his commitment to free speech. Of course, a few weeks later, the new Twitter boss did what he intended citing that Sweeney’s jet-racking account created in 2020 violated the platform’s rules. 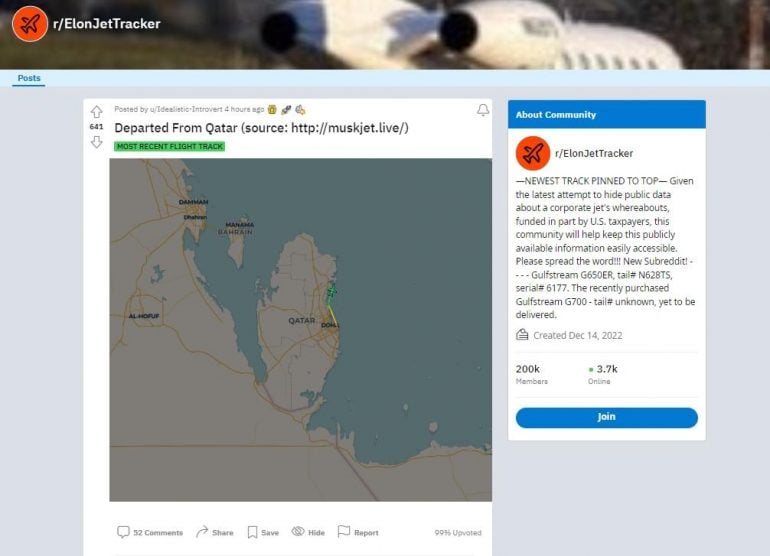 Top posts on the subreddit shared the coordinates of Musk’s jet. One user on the subreddit wrote a post with over 1,000 upvotes saying they had been banned from Twitter on Thursday for posting a link to r/ElonJetTracker.

Tags from the story
Elon-Musk, Social-Media