My dear Boss, you’re gonna love this one for sure. Any ardent Star War fan (like you) will trade anything in this world to get a room like this. Imagine three separate rooms, one starfield, a life-sized Han Solo, and more for your home theater! That’s exactly what geek couple, Vic Wertz and Lisa Stevens have. They recruited Doug Chiang, the lead designer on “Star Wars: Episode I—The Phantom Menace” and “Star Wars: Episode II—Attack of the Clones.” Three designs later, the couple brought in Mike Dillon and his custom design and fabrication company, Dillon Works, to do the icing on the cake. You can walk into the room and follow the backlit floor to either the left or the right. Both paths take you through automated sliding doors. On the left, there’s a secret door located behind the carbonite Han Solo (from the cliffhanger in “The Empire Strikes Back”). This is the media room for the couple’s extensive audio/video collection. 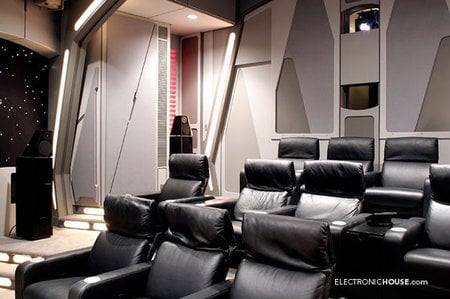 Roll over for more details on list of equipment……..

Tags from the story
Home-Theater, Star-Wars