Do you remember the absolutely insane Caviar Solarius Zenith iPhone 11 Pro that was revealed a few weeks back? Well, the Russian boutique company reached out to YouTube tech reviewer Marques Brownlee, aka MKBHD, to make a complete hands-on video of the world’s most expensive iPhone for his channel. What that means is we can finally get a close-up look at the one-off creation that is encrusted with gold and diamonds, and it even has a proper mechanical watch right at the center of its backplate. “There’s literally nothing I can say about this phone that’s useful to a normal person,” says Marques right at the start of the video. The Caviar Solarius Zenith is covered in 24-carat gold and features a total of 137 diamonds at the back. The pattern of concentric circles denotes our solar system and the center is the Sun, which is depicted in the form of a special yellow diamond (or sunstone) placed inside the mechanical watch. 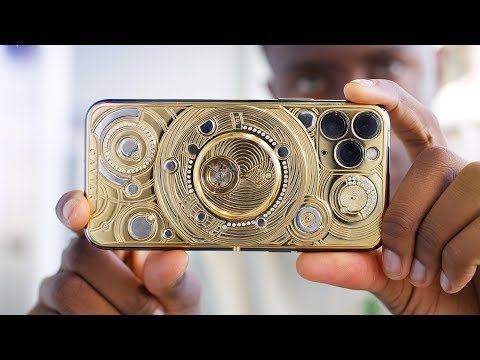 Marques also does a quick overview of the Solarius Zenith’s uber-premium box and its contents, mostly finished in black, including a pair of custom AirPods Pro. He even makes a comparison of this one-off customized iPhone to the first-generation Apple Watch that was available in 18K gold before being discontinued when Series 1 arrived. The pricing of this ridiculous creation runs between $100,000-$120,000 (depending upon the iPhone 11 Pro’s specs) – for that price, Caviar flies its representative from Russia who hand delivers the unit, just like it was done for MKBHD, even though it was just for a review. Have a look at the video, it’s insane!