Space may seem beyond the reach of most, but innovative companies are already making plans to serve up luxurious lifestyles beyond our atmosphere. We’ve already seen plans for the world’s first luxury space hotel, now we have an idea of what they’ll be serving: Champagne that’s specially crafted for consumption in space!

Created by Maison Mumm in partnership with space design agency Spade, the Mumm Grand Cordon Stellar employs a revolutionary new bottle and glass concept that uses the champagne’s own gas to expel the liquid into a ring-shaped frame, where it is concentrated into a droplet of bubbles. It can then be passed to someone and released into the air, where it floats until gathered up in a specially designed glass. If the concept is difficult to follow, check out the video that not only shows how the bottle was designed and constructed, but also how the Champagne is consumed in zero gravity. 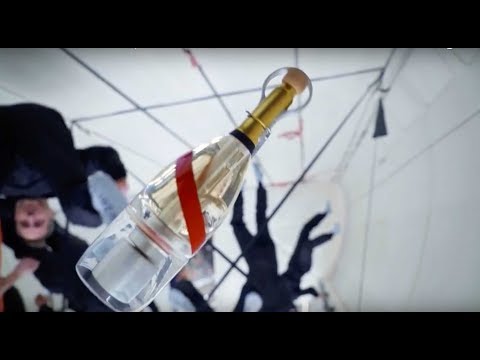 Spade founder Octave de Gaulle explained, “For the last 40 years, space travel has been shaped by engineers rather than designers. Instead of seeing zero gravity as a problem to be solved, we look at it as a design possibility. The big design challenge for Mumm Grand Cordon Stellar was actually getting the liquid out of the bottle.”

Interestingly, this new method of pouring and consuming Champagne also impacts its flavor and texture. While it floats in zero gravity or even in the special glasses, the Champagne is in the form of an effervescent foam, it is only once it is in the drinker’s mouth that it transforms into a liquid. “It’s a very surprising feeling,” said Mumm’s Cellar Master Didier Mariotti. “Because of zero gravity, the liquid instantly coats the entire inside of the mouth, magnifying the taste sensations. There’s less fizziness and more roundness and generosity, enabling the wine to express itself fully.”

The Champagne is consumed using a special glass that resembles a tiny coupe. Surface tension makes the floating droplet adhere to the glass, allowing it to be raised to the lips, but the real reason for creating this glass is because the design also enables glasses to be clinked together in a toast. This simple act brings the familiar celebratory aspects of the Champagne ritual to the foreignness of space.

While there’s no telling when ordinary folk might be able to try this Space age Champagne, discussions to have Mumm Grand Cordon Stellar supplied to future space missions and commercial space flights are already underway.