In the past we have seen a couple of hotels in China and a few in Japan experiment the idea of using robots to provide different services; but most of them were gimmicky than proving to be anything useful. However, the next time you visit Cupertino’s high-tech Aloft Hotel you might be surprised to find a 3-foot-tall R2-D2 styled robot carrying extra towels or breakfast for you. Behold the A.L.O Botlr, a robot butler that provides concierge service to guests. The droid bellhop is the brainchild of Savioke which is a California-based new company backed by Google Ventures and led by Steve Cousins, the former CEO of Willow Garage.

The service robot designed for the hospitality industry is approximately three feet tall, weighs less than 100 pounds and has a carrying capacity of two cubic feet. It is designed to travel at a human walking pace and comes loaded with a 7-inch tablet screen to interact with guests and staff, as well as 4G and WiFi connections so it can call elevators when it needs a ride. Rather than knocking, the robot will call the room’s phone and the guests are encouraged to tip it by firing off a tweet using the hashtag #meetbotlr. The first robot will be deployed on August 20, serving as a test that could lead to additional Botlrs being permanently used by the hotel. Brian McGuinness, Global Brand Leader, Starwood’s Specialty Select Brands, said A.L.O. “has the work ethic of Wall-E, the humor of Rosie from ‘The Jetsons’ and reminds me of my favorite childhood robot, R2-D2.” 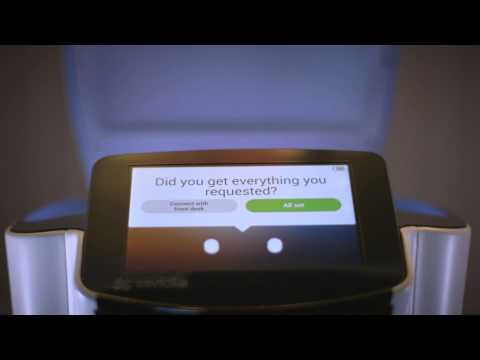