Writing so much about this land and its man-made landscape, I am left with no newer words to describe the upcoming structures in Dubai. It’s always the ‘largest’ or the ‘tallest’ or the ‘most expensive’ kinds of terms only that can epitomize the construction coming up in this crazy place. The latest on the list is the World’s largest Arch Bridge. The mile-long bridge will be 670 feet tall at its highest point! And it’s gonna encompass 12 lanes of traffic with a metro line running down the center. Estimated to be able to carry over 2,000 vehicles per hour in each direction, this bridge will be built at a whopping cost of 817 million dollars! (I have to curb myself from using !!!! as every fact deserves loads of !!!!…) 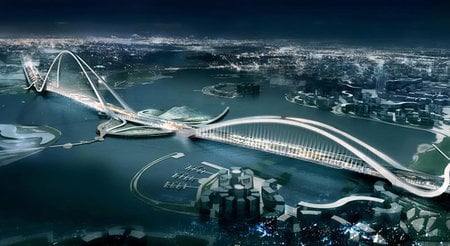 The bridge’s design was inspired by multiple sources, each evoking similar imagery – the rhythmic grace of Dubai Creek’s current, the elegant splendor of the sand dunes adjacent to the City, the lighting patterns of the lunar cycle, and the design of the future Opera House. The designers believe that their bridge design is not merely to link the City’s cultural and commercial developments or ease congestion, but an opportunity to connect people both physically and emotionally by creating an iconic landmark, destination, and gateway between the old, the new, and the future Dubai. Though the construction is yet to commence next month, by 2012 you can zoom past on this “world’s largest bridge”. What’s more spectacular is that folks out there usually stick to their deadline date and unveil the most sought after structures right on time.
Source

Tags from the story
Dubai, Worlds-Largest