Walt Disney! A name that needs no introduction; a name that is seamlessly etched in the childhood of every living being since the year 1937. He is the creator of the happiest place on earth aka Disneyland and Mickey Mouse who is as legendary and immortal as its creator in the minds of every living being. Celebrating the creative genius that is Walt Disney is Montblanc with their newest Great Characters Limited Edition line of pens. This edition celebrates the cultural legacy of Walt Disney, the American filmmaker, entrepreneur and innovator who pioneered motion picture technologies in sound, color and animation to bring to life his many unforgettable characters on the screen like Mickey mouse, his sweetheart Minnie Mouse, Donald Duck and so many more. Who can get over the cinematic charm of Snow White and the Seven Dwarfs the first and oldest feature-length animated film released by Disney? The line celebrates this epitome of talent and creativity with three exclusive writing instruments that amass the journey of the great Walt Disney.

1. Great Characters Walt Disney Special Edition-
It looks like a writing instrument but this beauty encompasses so many years and milestones in one small body. The shape is inspired by the famous monorail at Disneyland Park. Remember Steamboat Willie? It was Disney’s first animated short film featuring Mickey and Minnie Mouse. This pen’s clip is a reference to the smokestack on the steamboat in Steamboat Willie while colors that are now Mickey’s’ very own black, yellow and red are seen on the pen too. Take a closer look at the pen and you will find many hidden Mickey’s that are meticulously used in different parts of the pen like the precious resin cap and barrel. The cone has coordinates on it as a reference to the location in Los Angeles where Walt Disney started his first studio (his uncle’s garage). The Au 585 solid gold rhodium-coated nib of the Special Edition features a drawing of Mickey Mouse, while the cap top features the engraved signature of Walt Disney.

2. Great Characters Walt Disney Limited Edition 1901-
The multiplane camera was of great importance back at Disney. While many of us don’t know what it is, the camera invented by the Walt Disney Company was used to create the illusion of depth in animated motion pictures. The multiplane camera is used here in lacquer on the cap. Speaking of animation, the engravings on the cone pay homage to the release of Snow White and the Seven Dwarfs, Disney’s first full-length animated feature film, with its technical specifications (1.33:1, 83 MIN) and the date and place of the world premiere (21/12/1937, LA). however, the highlight of this beauty has got to be the barrel with a scanimation, a flickering Mickey Mouse animation that appears and disappears when the upper tube is rotated. Cute little thing isn’t it? The Au 750 solid gold rhodium-coated nib is adorned with an image of Mickey Mouse that was featured in the opening credits of early Disney animated films. 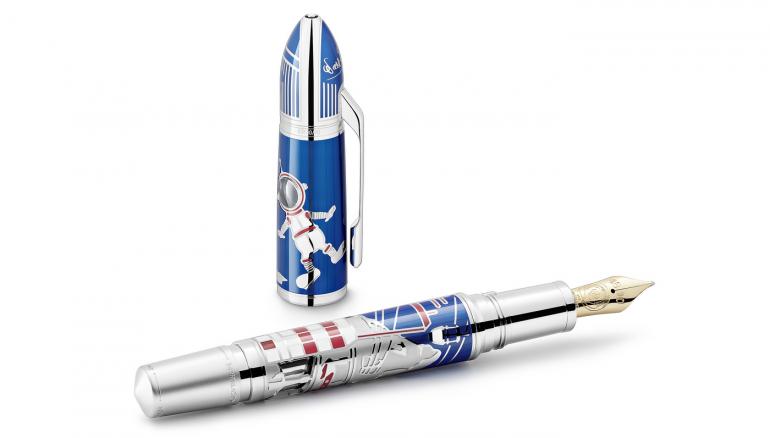 3. Great Characters Walt Disney Artisan Edition 90-
It’s all about the history that lies in the details where this collection is concerned. The fine craftsmanship of this instrument captures the visionary spirit of Walt Disney. In order to celebrate the 90th anniversary of the creation of Mickey Mouse, only 90 limited edition pieces will be made. This beauty captures elements of Disneyland on its cap and barrel which is made in precious Au 750 white gold and lacquer with yellow gold inlays. You can spot various attractions from Disneyland, characters from the futuristic Tomorrowland, one of the park’s original areas, and the famous monorail. I love how a cute Tomorrowland-dressed Mickey Mouse from Space Mountain perches on the cap. Seen on the gold nib is the logo of the famous Mickey Mouse Club.