Time and again, we’ve written a lot about his creations. Today it is time to know more about the Midas-touched designer, Stuart Hughes. Based in Liverpool, he has smeared his expertise over almost every gadget that money can buy. But certainly most of his creations are beyond the reach of a common man. Leading as the creator of the highest number of ‘Most Expensive’ collection, let’s hear it from Stuart Hughes himself……

What lured you in to the world of luxury?
It was as a hobby of mine by creating the world’s rarest and coolest bike it was a 1982 old school BMX which I fully furnished in 24ct gold, which caused a huge noise out there.
Will the craze for luxury brands ever fade?
Not for me I mainly work on the hottest gadgets so there is always something hot to trick up.
Where do think the industry is heading?
Anywhere I can take it too.
How did you get the idea of GoldStriker?
Goldstriker is where it all started for me its something based on my knowledge of how consumers like their things that little bit different. This was great so me and my wife Kath went onto do the more crazy things on www.stuarthughes.com
Do you think the internet benefits the manufacturers to cater to a global audience?
Luxury Launches rock so enough said!
Why do you pick gadgets over other objects for a bling makeover?
People just love their gizmos and go nuts for my ideas for them.
Did the recent economic crisis affect the luxury industry? If so, then do you see a turn around?
I luckily did not notice any change.
Do you think that the current gold market situation will affect your work?
No, my clients know how crazy the precious metals have gone up in $
What is your most expensive creation?
The 8 million Dollar iPhone.
What is your most treasured possession?
My Grand mother’s crucifix.
What is your greatest extravagance?
I like my cars.
What do you consider your greatest achievement?
Being a father
Apart from playing the role of Midas, which talent would you most like to have?
Being prime minister so I can kick all the present members of parliament in the nuts.
What or who is the greatest love of your life?
My family.
Which living person do you most admire?
Anyone who can battle serious illness, especially kids.
If not the Bling King, what would Stuart Hughes be?
Seriously I would have been prime minister.
What can we expect the next bling-thing from your lair?
No idea at the moment but what ever it is it will be crazy but beautiful. 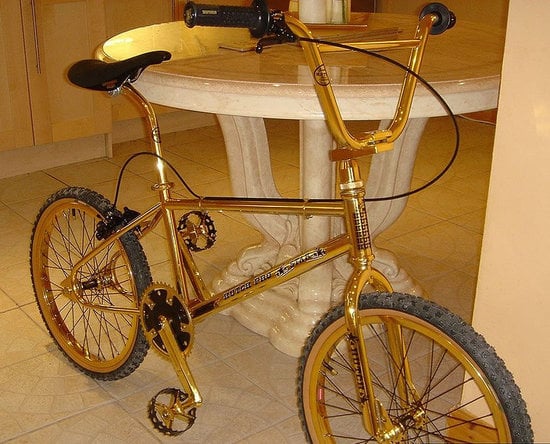 Tags from the story
Interview, Stuart-Hughes