As I strolled along the roads of the heart of London’s prime locations, the great Knightsbridge, I identified the Bulgari residences with quite some ease. With an array of sportscars and luxury chauffeur cars parked by what looked like a St.Tropez VIP room and a team of doormen dressed as the green knights of Windsor, I soon figured I had arrived- but I had yet to figure out why Alain Ducasse would branch out his strain of organic restaurants to Bulgari. 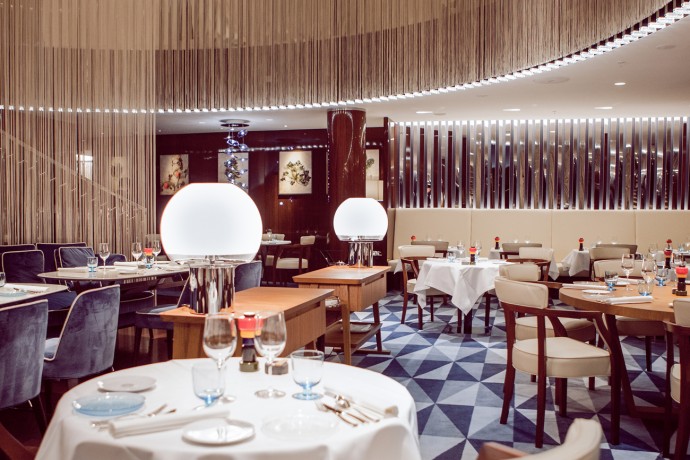 Atmosphere
Previously (and less creatively) “Il Restorante”, the Rivea, which stems from the word Riviera, is a prompt trot away from the main doors of the Knightsbridge entrance and a short flight of stairs into the Bulgari cellar. After being escorted through to my table, I sat down and began to make sense of the whole environment. I felt a certain sense of identity from diverse range of customised restaurant tableware, which protrudes the restaurants colour and vibrancy as well as conveying an open sense of accessibility. The staff- who provide an impeccable service, are casually chic, which really echoes and sets the tone for the Rivea.

I certainly must commend the creatives behind what is an elegantly informal setting- which I feel encased the warmth of the atmosphere and reflected the vibrancy of the dishes that were to come. This atmosphere was achieved by using a lot of reflective panels around the outskirts of the room, using a large range of soft lighting throughout the interior, through dressing the seats in elegant bespoke crème leather and decking the Rivea in chilled, yacht-standard varnished wood- courtesy of Antonio Citterio Patricia Viel and Partners. The ambiance is glued together with the plethora of small glass jars containing preserved lemons, artichokes and pasta, which are seated close to some of Ducasse’s infamous market favorites, grissini, and multiple loaves of baked breads.

The convivial characteristics of the restaurant were evident from the instance that I was exposed to it- the restaurant is almost a second residence for residents of Bulgari and the followers of Ducasse from the far eastern region (specifically Japan). However, it must be said, I was stunned that Alain Ducasse, a visionary who wants to implement organic market foods into healthy simplistic dishes, would locate Damien Leroux in what is fundamentally a bookclub for oligarchs where he runs the danger of not being appreciated. The Rivea and Bulgari are intricate works of modern art, but do not quite fuse in essence- in contrast to the harmonious relationship between The Dorchester and Ducasse’s creation within.

As advised by the waitress, I subscribed to the five-course meal strategy through ordering: two starters, one pasta, one main, and a dessert to finish off- as did the guest accompanying me. The restaurant also suggests and promotes the sharing of dishes. Now, I did feel that there was a slight inconsistency regarding the starters; I felt that some symbolized Ducasse’s ideology of vibrant Mediterranean flavors, whilst some of the dishes lacked depth and the innovation that is so highly regarded by many of Ducasse’s critics. 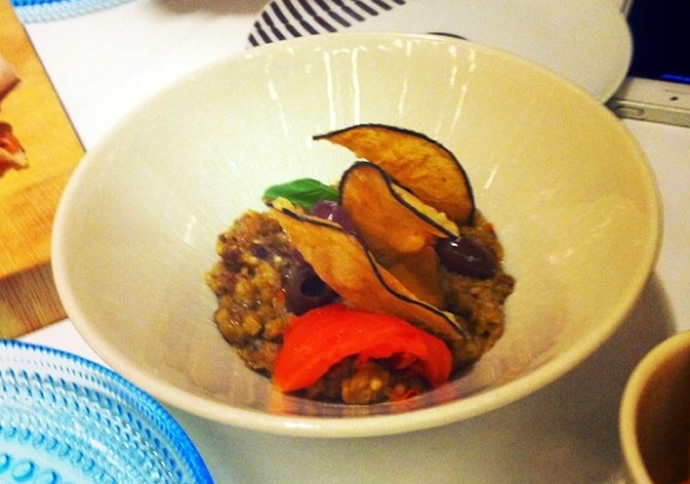 Starters
The Sea Bass with Carpaccio and Pine nuts was first up, a dish that consisted of sea bass so delicately and finely cut that one could tear it with the slight nudge of a fork. It was a multi-sensory dish- I felt that protégé Damien Leroux did Ducasse proud with a particularly vibrant dish topped with a family of fresh market greens and a sprinkling of baby tomatoes. I did feel that the aubergine caviar was substantially under par- it didn’t possess the intensity or saturated palette of flavors of vegetables that one would have expected, and the texture was not to my appetite- especially as I take closely into consideration a dish’s aesthetic qualities. The dish was topped with delicate aubergine crisps- which were delectably light.

For me, the Gamberoni Lobster in geleé was a champion’s starter as it exhibited the sleek, modern innovation that one should look forward to in a dish developed by a chef with a pocket full of Michelin stars. The contrast of the soft yet crunchy Gamberoni that was so full of the flavors of the sea and the consistent texture of the geleé is en point. To continue the theme of seafood, I also ordered a Warm Octopus and potato salad, a variety of shredded and thickly cut pieces of scrumptious, tepid octopus on a bed of flavor-intense garlic sauce, which also acts as a marinade for the potatoes. Another gastronomical harmony as the dish both contrasts and thus complements itself in color, texture, and intensity of flavor. 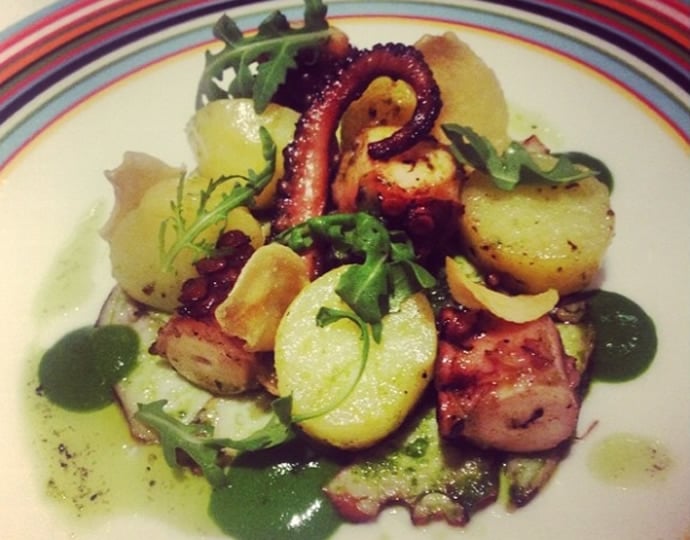 Pasta and Beverages
Moving on to the pasta, I felt inclined to try Ducasse’s dish of perfection- the Ravioli with Aubergine and Ricotta, so I had my highly analytical taste buds at the ready. When it was presented to me, in its light cacciatore sauce, I inspected and probed each singular piece of gastronomical art with surgical precision- and I was impressed by Leroux’s work: a thoughtful range of vegetables welded together and encased in a fine layer of ravioli pastry. The main ingredient? Passion. Each pocket of ravioli is a story- a reflection of a chef’s love and patience for the art of cuisine. As this dish is generally quite stringent, the sommelier recommended a glass of red wine from Black Forest fruits. Due to the nature of the berries, the ripe, black fruits pose a sweetness, while the sour cherry gives the wine a distinct kick- you can feel some earthy flavor coming through, as well as some hints of tobacco. A considerate recommendation, although it fell more so on the strong side. Had I visited in season, I probably would’ve had a fair few gratings of truffle just to ice the dish, but it was a creditably gentle dish. 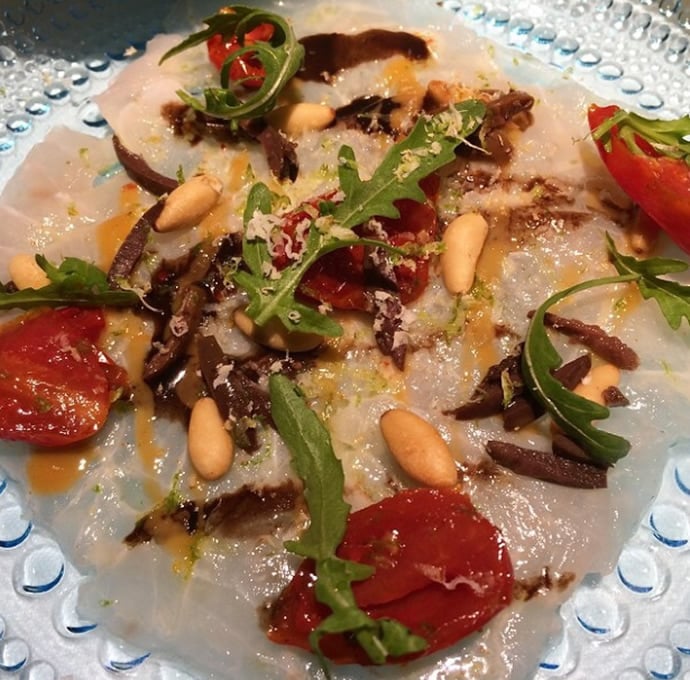 Main Course and Beverages
With my main course, the Seared Beef Filet served with a helping of traditional roast vegetables and an onion-based gravy, I had a tannic red wine to balance the iron levels in the beef- which was not as tender or moist as one would have preferred- but it was, for the most part, bearable with the aid of the gravy and vegetables. The guest accompanying me opted for the Roast Duck and a Cookpot de Legumes to share.

The Roast Duck lacked flavor and was a little less tender than expected- but the Cookpot was a delightful dish to share as it consisted of layer on layer of culinary surprises from the market, which I admire as it conveys a tangible sense of terroir and support for local artisans, as well as depicting how truly these dishes are based on spontaneous, seasonal cuisine. The beauty of the diverse tableware, as mentioned, was that it allows the kitchen and front of the house to play and mix and match the various dishes with the rustically chic ceramic plates and bowls that are in emotionally soothing neutral tones.

Dessert
To round up the night, I saw nothing more appropriate to order than a sweet Limoncello and Sorbet with intense Amalfi lemon and shortbread- an explosive burst of strong zingy flavors made up of a lemon marmalade shrouded by a dome of creamy lemon curd and gems of French meringue which exhibits a flavor from the myriad of flavors defined by the region of inland Nice to Liguria, which Ducasse’s aimed to seize and serve to his prospective guests.

Verdict
To give credit where it is due, the overall experience of the Rivea was an interesting one: Alain Ducasse has tried to make a statement with this restaurant- he constructed from it a personality that welcomes all supporters of traditional provincial market cuisine, both: far and near. An experience that I would certainly recommend to others, and I think that it is conversely the case because it is in such a wonderful environment inside Bulgari.