The world’s longest car dubbed “The American Dream” has finally been restored and is even longer than before. The storied limousine was originally built by California-based custom car guru Jay Ohrberg in 1986. Measuring 100 feet in length, the massive limousine was recognized by the Guinness World Records in the mid-1990s as the longest car in the world. The American Dream immediately became a superhit and traveled extensively as a show car that was trailered on flatbed trucks from location to location to take part in different events and shows across the United States. However, the limousine slowly faded from the limelight. It was ultimately left abandoned to rot in a New Jersey warehouse for many years. But the historically important automobile was rediscovered a few years back and was transported to Florida in 2019 for complete restoration.

By looking at the pictures, the restoration job looks top-notch with the American Dream looking better than ever. The record-setting limousine was purchased and rebuilt from the ground up by a car collector from Florida named Michael Dezer. The intensive restoration process included a full-body rework, an interior makeover, an engine rebuild, and upgrading the existing amenities offered by the American Dream, which includes a swimming pool, mini-golf course, and jacuzzi.


The limousine is made up of six Cadillac Eldorados and has 26 wheels to roll around. Powering the car are two V8 engines on both ends. The restored limo measuring in at 100-feet and 1.5-inches long, breaking the previous record. In fact, Guinness World Records renewed The American Dream’s title as the world’s longest car. Dezer spent around $250,000 to restore the limo, including shipping, and plans on putting it as a display piece for his Dezerland Park automotive museum that’s located just outside of Orlando, Florida. 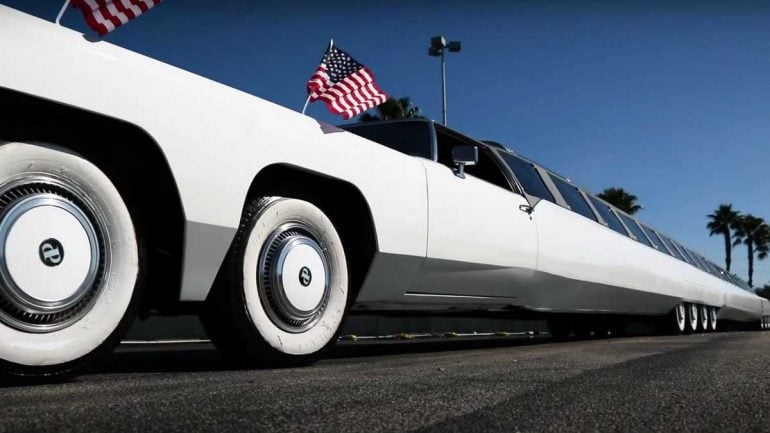 Tags from the story
Guinness-Records, World-Records