Arrested Malta-flagged Axioma has reached its fate. The 236-footer that was seized by British authorities in Gibraltar in March after the U.S. investment bank JP Morgan said that the ship’s owner, Dmitrievich Pumpyansky, owed it more than $20 million in loan repayments. The auction for the yacht has ended and it may have fetched $41 million (£35 million). Axioma has officially become the first seized superyacht to be auctioned by authorities. Since the onset of the Russia-Ukraine war, several superyachts have been impounded and are now awaiting their fate. Axioma motoryacht, on the other hand, may have found a new owner.

As per the Gibraltar Chronicle, the Admiralty Marshal received 63 bids for the $75 million superyacht at auction. While it could take up to two weeks before the transaction is completed, the ship’s captain has admitted to the Axioma yacht having fetched roughly $41 million or more. This amount not only settles dues with the JP Morgan bank, complete with interest and costs, the Admiralty Marshal’s expenses, and claims from other creditors but also leaves a surplus of almost $12 million.


Nigel Hollyer, the broker to the Admiralty Marshal of the Supreme Court of Gibraltar who led the auction, revealed an unanticipated late surge by prospective buyers for Axioma from around the world. Interestingly, it is only the Axioma yacht that has sold for a pretty penny (considering it is almost a decade old and has a tangled history), not the ultra-expensive objects it bears. The court was perplexed by the many luxury items onboard that were not a part of the sale. 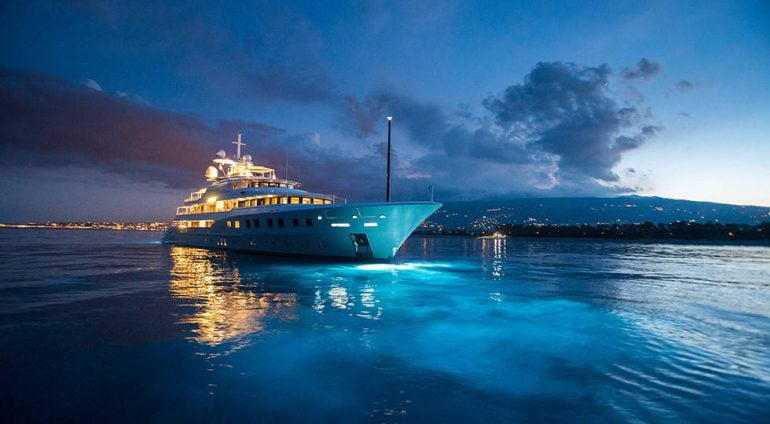 It’s no surprise then this vision in blue went under the hammer for a cool $41 million. As reported by Luxurylauches in June, the JPMorgan bank had provided Pyrene Investments with a $22 million loan (a shareholder of Pyrene Investments was a Cypriot company called Ferdberg Holding Ltd., owned by Dmitry Pumpyansky).


The billionaire failed to repay the bank’s loan, and his inclusion in the sanctions list froze his assets, which breached the loan agreement. Last month JPMorgan won a court order in Gibraltar, allowing for the sale of the 236-foot Axioma motoryacht. The sophisticated, well-designed Axioma flaunts six decks packed with several amenities like an infinity pool, 3D cinema, and top-notch suites.
It will be interesting to see how the authorities in Gibraltar put to use the excess funds from the sale of an oligarch’s prized possession?
Tags from the story
Billionaires, Superyacht