A civilian version of the V-22 Osprey is now available, called the Bell 609; it’s functionally the same only smaller than its compatriot. It has the ability to take off and land with the adaptability and accuracy of a helicopter. After takeoff, it can rotate its engines forward to vertical allowing it to fly with the speed and efficiency of an airplane.

The craft can accommodate up to 9 passengers and has an 1100-mile range. Speeds reach 300 mph at 25,000 ft. Spare change to the north of $20 million will allow you to procure ine. Apparently the original V-22 cost $70 million or $115 million fully outfitted. 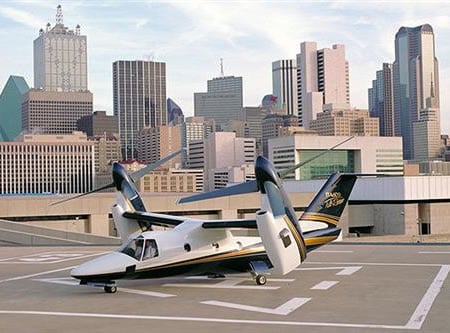