With a price of $500,000, the Ford GT is not the cheapest supercar out there but it sure is one of the most affordable to own. Adding a tarmac-ripping, fire-breathing supercar to the garage is every car enthusiast’s ultimate dream. However, it comes as a rude shock to gearheads like us when we realize that the sticker price of a supercar is only the tip of the iceberg. Often, these beautiful machines are prohibitively expensive to own. Something as basic as an oil change for such high-performance automobiles can cost as much as the retail price of a hatchback; unless you own a Ford GT! In his latest video, real estate mogul and supercar collector Manny Khoshbin talks about the ownership experience of his Ford GT Heritage Edition while driving the gorgeous supercar on the streets of California. That’s when he drops the bomb! Manny only had to pay only $433 for an oil change on his Ford GT.

Five hundred dollars might not be dirt cheap for an oil change but remember we’re talking about a highly collectible supercar that can easily sell for $1.5 million in the used car market. To show how ridiculously inexpensive it is, Manny goes on to compare it with the other supercars from his personal collection. The realtor says he had to pay around $6000 for an oil change service for his Pagani, while the legendary Mercedes-Benz SLR McLaren cost him $4000 for the same. However, nothing even comes close to a Bugatti,which apparently costs $25,000. That’s 5000 times more expensive than the Ford GT. Although he doesn’t specify which model (the car collector owns three of them), the service costs should be very different. The millionaire does mention that an oil change on the Bugatti is a very complex and labor-intensive job. Apparently, 16 bolts have to be unscrewed and each of the 16 cylinders has its own oil reservoir. Manny goes on to quip he might try changing the oil on his Ford GT considering how cheap it is. 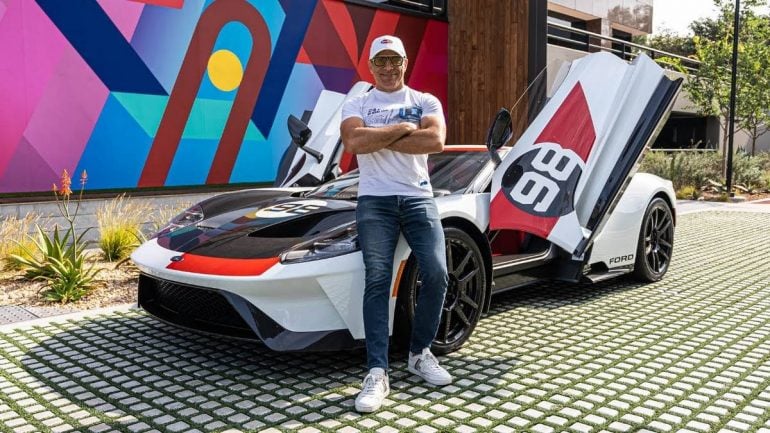 Ford GT
Manny Khoshbin added the stunning Ford GT Heritage Edition to his stable at the beginning of last year. The second-generation Ford GT was launched in 2016 to celebrate the iconic GT40’s 1-2-3 win at the 1966 24 Hours of Le Mans. Earlier this year, Ford announced that the production cycle of the supercar is close to its end and the remaining examples out of the planned production run of 1350 units will be delivered by the end of this year. Unlike the legendary race car it is inspired by that had a massive V8, the modern Ford GT is powered by a 3.5L twin-turbocharged Ford EcoBoost V6 engine that produces 660hp and 550 lb-ft of torque. Interestingly, the engine is closely related to the F-150’s 3.5-liter V6. 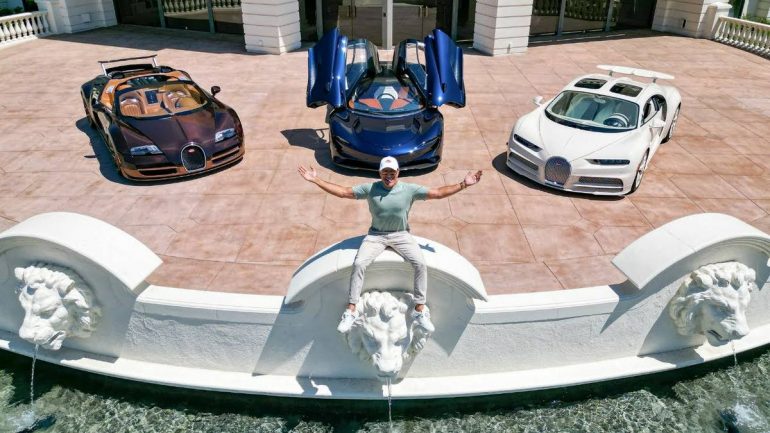 Manny Khoshbin
If you’re a fan of exotic supercars and often scroll through YouTube for automotive-themed videos, I’m pretty sure you must have stumbled upon Manny’s channel which mostly features videos on his stunning car collection. The Iran-born businessman owns a commercial real estate company by the name of The Khoshbin Company and has an estimated net worth of around $80 million. However, his jaw-dropping car collection is worth half of it, if not more! In addition to three Bugatti hypercars, the social media celebrity has at least two Rolls-Royces, two McLarens, nine Mercedes-Benz SLRs, and many more highly-collectible cars. Interestingly, he started out by working at K-Mart collecting carts and mopping floors for $3.15/hour at the age of 16. Impressive, right