Jacob & Co. has released its latest Chiron-inspired timepiece for Bugatti and it’s just as stunning as the hypercar it’s based on. It was in 2019 when Bugatti and Jacob & Co. signed a multi-year partnership which has already spawned several incredible timepieces. After introducing four different iterations of the Bugatti Chiron Tourbillon last year in December, the watchmaker has followed it up with an 18K white gold version that is encrusted with 190 baguette white diamonds, 109 baguette black sapphires, and 42 baguette orange sapphires. In addition to that, the crowns and pushers are set with an additional 60 black sapphire baguettes. 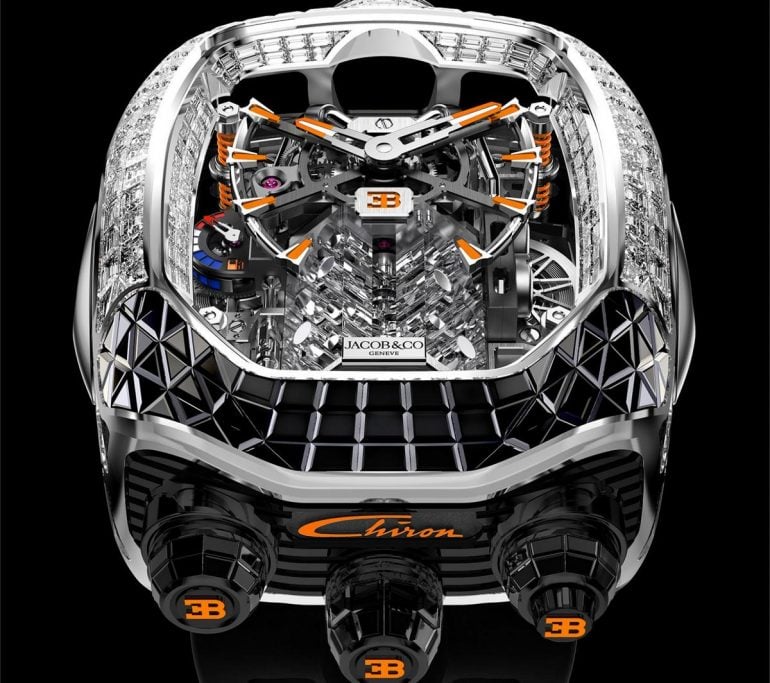 Just like the other versions of the Bugatti Chiron Tourbillon we have seen thus far, the latest iteration also features a tonneau case that is inspired by flowing lines of the Bugatti Chiron. The crowns of the watch are placed at the bottom of the case and feature Bugatti’s EB logo in bright orange. The left crown can be used to set the time, while the middle crown winds both the movement and the animation, and a push of the right-hand crown starts the animation. 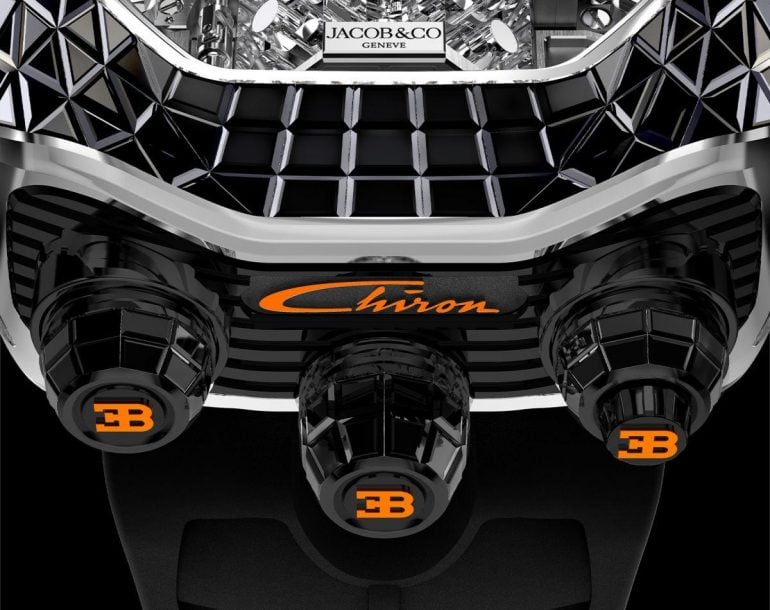 The highlight of the Bugatti Chiron Tourbillon is the miniature W16 engine on the dial that jumps to life on pressing the right-hand crown. The majestic animation includes the turning of the crankshaft that sends the 16 tiny pistons moving up and down in unison, while the two turbochargers on the side of the engine block spin while the engine runs. Powering the timepiece is Jacob & Co.’s 578-components, manual winding JCAM3 movement that features a 30-degree inclined flying tourbillon and a 60-hour power reserve. The movement also suspended on a working shock absorption system that is visible on the dial. Pricing of the latest version of the Bugatti Chiron Tourbillon is only available upon request. 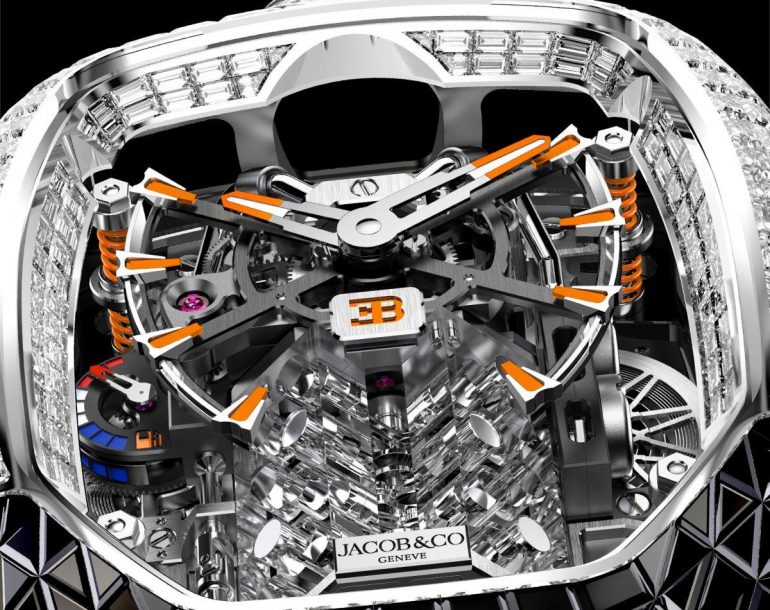 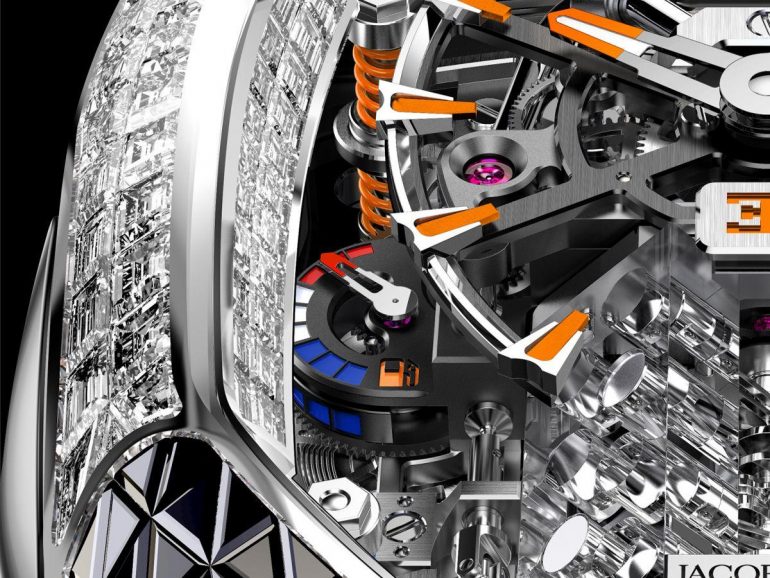 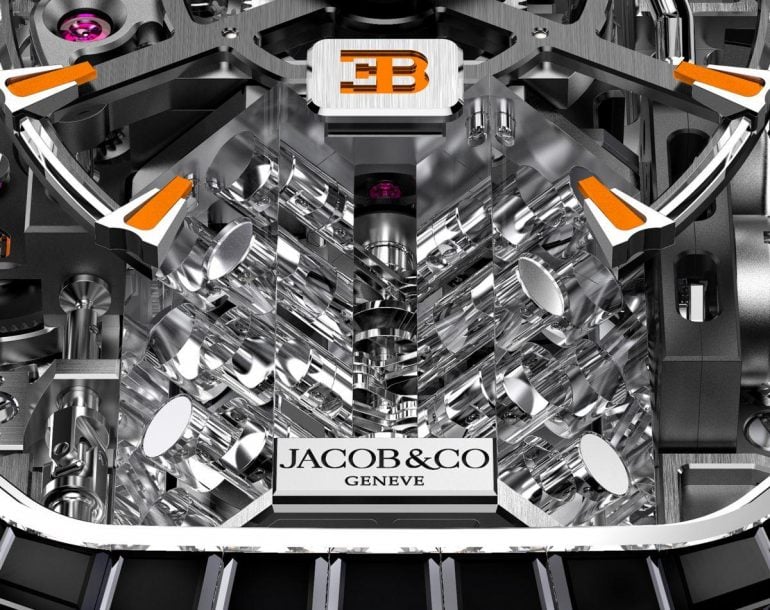 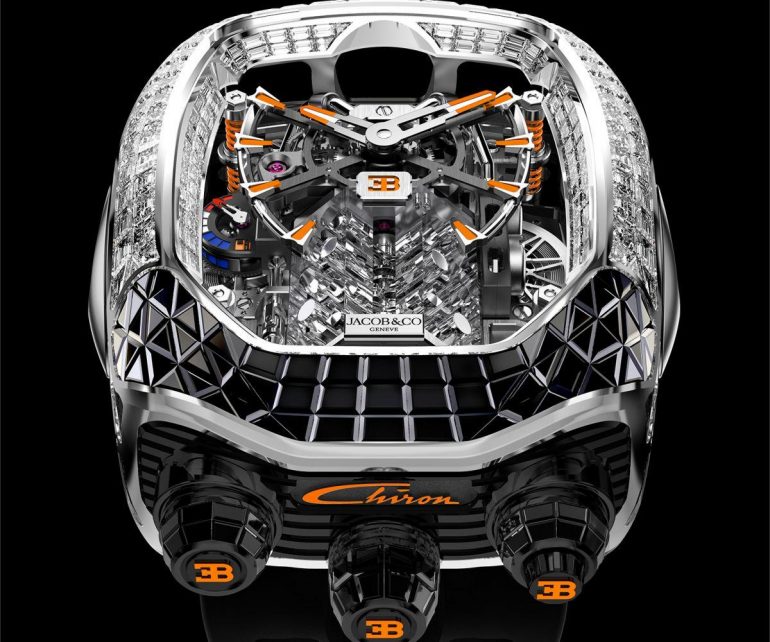