The new McLaren P1 GTR with its genuinely stunning green and yellow racing livery might be the eye candy stealing all the attention at the British automaker’s stands in Geneva , but right next to it is the all-new 675LT, which is so much more impressive than we had imagined it to be. In the run up to the 2015 Geneva Motor Show, McLaren had teased the exhaust sound of the 675LT, which sounded absolutely stunning. And, now that the wraps are off, it’s safe to say that it has mean and menacing looks that does perfect justice to that godly exhaust note. 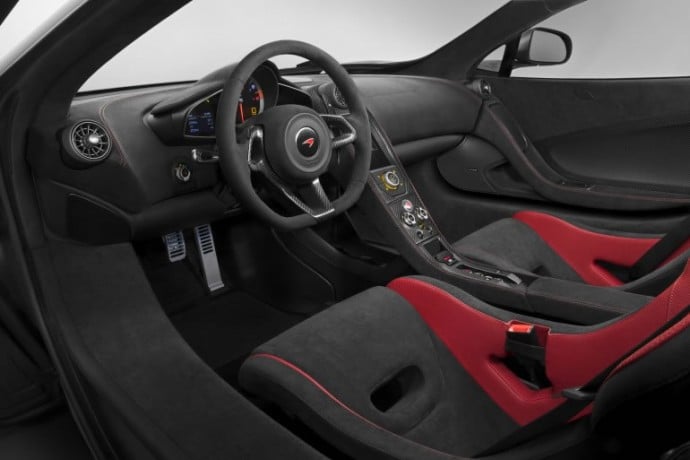 The spiritual successor to the McLaren F1 GT ‘Longtail, which is also on display, the McLaren 675LT is not only faster but also lighter and more efficient than the McLaren 650S. It is powered by the familiar 3.8-litre twin-turbo V8 engine. However, McLaren claims that 50 percent of the package is new. The automaker has also fitted new, more efficient turbos to the engine in addition to making changes to the design of the cylinder heads and exhaust manifolds. McLaren has also fitted a new camshaft and lightweight connecting rods, and developed a faster-flowing fuel pump and delivery system. Thanks to all the upgrades, the engine now pumps out 666 horsepower (a gain of 25 horses from the 650S), which is enough to dispatch it from 0-62mph in 2.9 seconds. It gets a 0-124mph time of 7.9 and a top speed of 205mph.

In terms of the styling, the upgrades on the outside include a large carbon fiber front splitter at the base of a new front bumper, end plates ahead of the front wheels, an extra cooling intake nested in a larger door blade, and twin titanium exhaust pipes in back below a longtail airbrake that’s larger yet 50 percent larger than the one on the 650S. It also uses P1-inspired control arms and its springs have been stiffened by 27 percent up front and 63 percent at the rear. The McLaren 675LT weighs just 2,712lbs, a significant 220lbs less than the 650S. McLaren has confirmed that the production will be limited to 500 units and all of them will be coupes. As for the pricing, it’s going to cost about £260,000, or $400,000 approximately.