It’s been six months since McLaren first revealed the P1 GTR in concept form at the 2014 pebble beach concours d’elegance. The production-spec 2015 McLaren P1 GTR has been finally unveiled before the Geneva Motor Show debut, and oh-my-god it looks phenomenal. Wrapped in racing livery that pays homage to the yellow and green ‘F1 GTR chassis #06R’, which dominated the 1995 24 hours of le mans, the track-only variant of the P1 hybrid hypercar remains essentially identical to the Design Concept. These supercars have been developed specifically for the track but for no specific racing series, similar to the Ferrari FXX program. 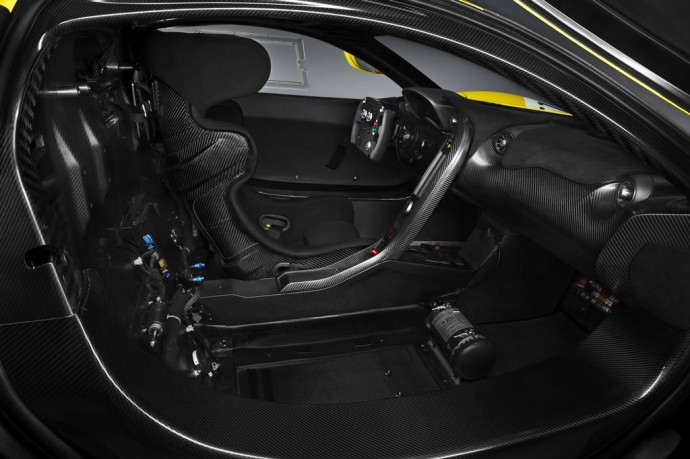 Based on the McLaren P1, the P1 GTR incorporates a long list of upgrades to make it better suited towards to work flawlessly in a closed circuit than open roads. At the front, the difference is clearly noticeable thanks to the wider track, aggressive profiled splitter and sleek air-flow blades. The car sits 50mm lower and works with a fixed-height wing that sits 40mm above the rear body, which helps the P1 GTR produce 10 percent more downforce. The 3.8-liter twin-turbo V8 hybrid powertrain has been optimized for track use and re-tuned. The internal combustion engine produces 789 horsepower (up from 727) and the electric motor another 197 (up from 176) for a combined output of 986 hp. All the unnecessary parts have been removed along with many parts replaced by lighter ones. All the weight saving measures has resulted in a drop of 110lbs. the P1 GTR will be part of an organized program. Participating owners will start at the McLaren Technology Centre to have their seats fitted, livery designed and fitness assessed before hitting the first track sessions at Silverstone in the UK and Catalunya in Spain. The buy-in for the McLaren P1 GTR, which is available only to current P1 owners, sits at a whopping $3.06 million (£1.98 million).