Over the last two years, we’ve closely followed the development and progress of the Airspeeder Mk3, which is being touted as the world’s first electric flying racing car. The electric multicopter created by Australia-based company Alauda completed its first set of test flights earlier this year in preparation for the first-of-its-kind racing series. The company has now released a new video showing two of its Airspeeder aircraft competing for the first time in a drag race, which is a teaser of what to expect from un-crewed racing series dubbed the Airspeeder EXA Series. The first-of-its-kind drag race took place in an Australian desert and Team Alpha and Team Bravo, composed of Alauda engineers and official remote test pilots, pitted the pair of Mk3 racers against each other. 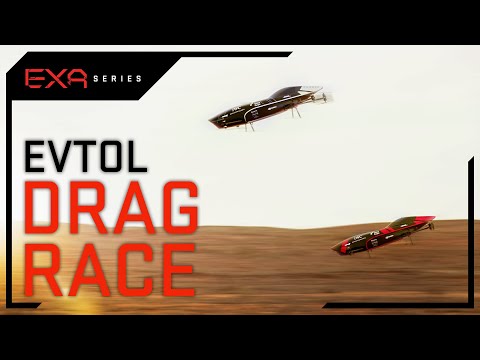 As you can see in the video, the two Airspeeder Mk3s competed on a marked dragstrip with their pilots remotely operating the flying cars from the ground. The dragstrip was 300 meters in length and Team Bravo ended up winning the race by crossing the finish line with a speed of 96mph. The Airspeeder Mk3 debuted in February this year. The Mk3 is an octocopter with eight propellers with as many motors that have a combined output of 320kW. The company says it has a thrust-to-weight ratio that exceeds that of the F-15 Strike Eagle jet. As a result, the flying car that’s mostly made of carbon fiber can go from 0-60mph in 2.3 seconds, hit a top speed of 124mph, and fly 500 meters high. While the Mk3 is a remotely controlled aircraft, the next-generation version named Airspeeder Mk4 will have an onboard pilot, which will get its own racing series in 2022.