What do you do when you have truck-loads of cash to splurge, a front-yard full of hypercars and lots of free time on your hands? Well, you take those cars down to a race-track or an open stretch of land and make them roar. However, a well-known Qatari national thought otherwise, and decided to take his hypercar for a spin down the crowded streets of Beverly Hills. Residents and passersby witnessed a yellow LaFerrari rip down the streets at Beverly Hills recently, followed by a speeding white Porsche 991 GT3. Obviously, the two drivers weren’t thinking clearly enough and seemed to be racing, with true boy-racer recklessness. While the LaFerrari is believed to be owned by Sheikh Khalid bin Hamad Al-Thani, a member of the ruling family of Qatar, the Porsche lacked registration plates. 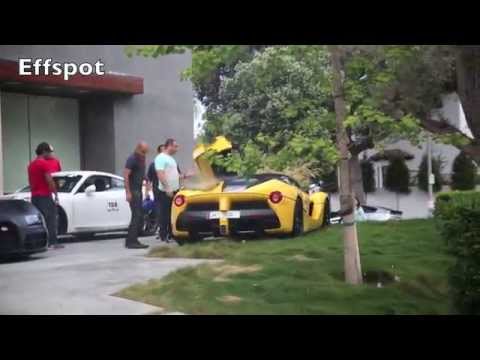 After a video of the two cars breaking traffic laws in Beverly Hills went viral on the internet, with a whopping 1.5 million views, Sheikh Khalid is now reported to have “fled” the United States, with his cars in tow. While owning and driving around hypercars is a pretty great way to turn heads, doing so with disregard to everyone else around isn’t really such a wise idea, and Al-Thani seems to have learned that the hard way.

Tags from the story
Beverly-Hills, Ferrari