We all know that the Dubai Police Force has some of the most enviable rides on the planet including the likes of Bugatti Veyron, Lamborghini Aventador, Aston Martin One-77 and numerous other supercars in its stable. It is the only police department of its kind in the world to maintain such a huge line-up of extravagant law-enforcement vehicles; however, its Emirati neighbors Abu Dhabi wants to carry forward this tradition and build its police department their own superfleet of expensive patrol cars. But instead of speed, they have gone for opulence. Abu Dhabi Police has taken possession of a new Rolls-Royce Phantom that was unveiled during Traffic Week 2015 at Yas Mall.

While the Dubai Police cars sport white and green livery, the Rolls-Royce Phantom comes wearing the traditional purple and white livery of the local police and has a 999 number plate. Something we noticed is that it is the older Phantom Series I rather than Series II. It is fitted with a 6.8 liter V12 engine offering peak power of 453 bhp and peak torque of 720 Nm at 3,500 rpm and can accelerate from 0 to 100 kmph in 6.1 seconds and reach a top speed of 240 kmph. Other apparent modifications include the obligatory police light bar and a gold “Spirit of Ecstasy” hood ornament. Will this mark the beginning of a rivalry between it and the Dubai force is something that needs to be seen. 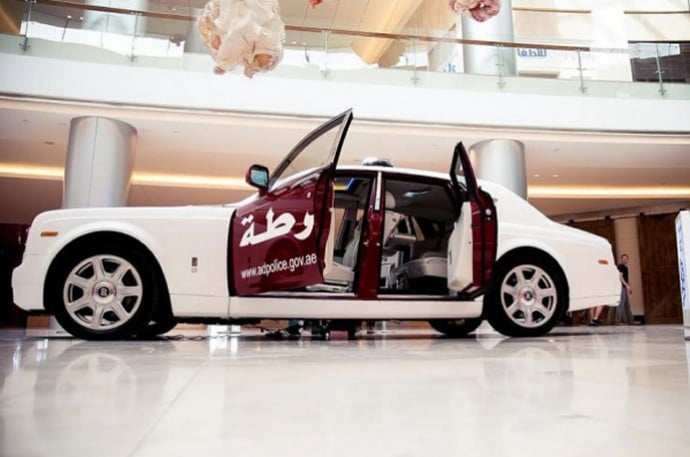 Tags from the story
Abu-Dhabi, Rolls-Royce-Phantom