Luna, one of the world’s largest luxury explorers, has seen not one but two oligarch owners- first, Roman Abramovich and then Farkhad Akhmedov; both of who have failed to make the most of its insane incredibility. Luna has seen more turmoil moored than on choppy waters despite its grandeur and excellence. It wouldn’t be wrong to say this jaw-dropping explorer superyacht can’t catch a break. Luna was in the center of a tumultuous divorce proceeding between owner Farkhad Akhmedov and ex-wife Tatiana Akhmedova. Their battle was dubbed the most expensive family feud in history since a London high court judge awarded Akhmedova a $460 million divorce payout in 2017, as per National News.

Mrs. Akhmedova hoped to make the stunning nine-deck vessel worth $353 million her own. While the couple battled it out in court, this magnificent luxury yacht was wasting away, moored in Port Rashid in Dubai for more than two years. She tried every trick in the book (details below) to acquire the megayacht, but the lavish Luna was the one asset Mrs. Akhmedova could not win.
One would imagine that the Azerbaijani-Russian billionaire would finally have the time of his life aboard the magnificent megayacht. Still, a year later, the threat of losing Luna continues to loom on his head thanks to being included in the list of sanctioned oligarchs. The two reasons authorities have not seized Luna in Hamburg, Germany, is its repair work for the past few months. The other reason, like with the majority of oligarch yachts, is proving its ownership. However, Auto Evolution stated, according to some media sources, the German authorities may be at the ready to seize it as soon as it tries to leave.
Let’s take a look at the luxurious Luna in detail:
Luna is a massive ship flaunting nine decks, a vast swimming pool, and a mini-submarine. The 377 footer has been in the news ever since it was commissioned by its famous owner back in 2010. Roman Abramovich was its first celebrity owner, who did little to enjoy this incredible asset. Four years later, Luna was purchased by new owners in 2014. According to Boat International, the Akhmedova’s enjoyed a season onboard the luxury vessel sailing in the Mediterranean but soon departed it for an extensive refit. This extensive refit (altered spaces, upholstery, and updated equipment) left the fantastic, feature-packed ship wrapped in her five-year survey.
Much like the monumental Dilbar yacht, Luna also boasts not just one but two helipads. Another similarity between the two superyachts is their generous swimming pool. Luna boasted a fabulous and famous pool, the biggest ever seen on a superyacht at the time, up until Dilbar showed up in 2015. The lower deck has two tender garages, a well-equipped gym, and an impressive beach club with a spa, steam bath, plunge pool, and sauna. Luna initially sported a massive TV in its beach club, which was eliminated for a good reason. “Who wants to see a huge TV in a beach club?” asked its representative. “Luna is a boat to relax on! There are 80 other TVs on board.”
To host at least 20 guests, Luna holds ten large VIP rooms. The lower deck is dedicated to a crew of 52 with improved cabins, modern fittings, and elegant interiors. Boat International shared that the one aspect of Luna that stands out is the large, impressive engine rooms. Besides the volume dedicated to housing the engines and electric motors, it is a clean, polished space, unlike any other vessel. “It’s the most spotless engine room I’ve ever worked in,” reports chief engineer James Burden — the result of a meticulous owner who regularly visits the crew areas.
Luna is the epitome of luxury with onboard water toys, including two water limousines worth millions. It is believed Luna houses two multipurpose custom-made lifeboat limousines at nearly $4 million each. 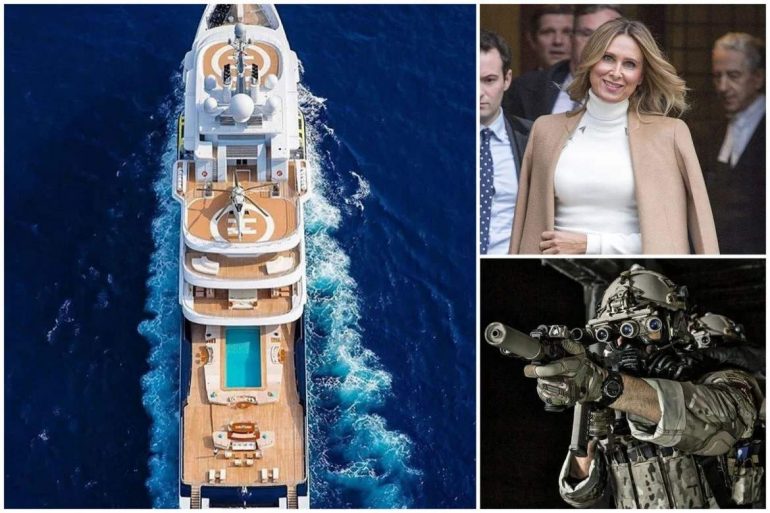 When his ex-wife hired ex-Special-forces soldiers to seize the yacht:
‘Some things in life are worth fighting for;’ in the case of Russian Oligarch Farkhad Akhmedov and Tatiana Akhmedova, it was superyacht Luna. The couple quarreled fervently for this gorgeous $320 million. 27-year-old Temur Akhmedov, their son, was also embroiled in the bitter divorce, albeit in a supporting role (his mother accused him of supporting the father and acting as his ‘lieutenant’ to hide a fortune of nearly $99 million owed to her).

Tatiana did the unthinkable to seize her treasured luxury vessel and hired former SBS operatives. Dubai’s highest court ruled against Tatiana’s appeal to capture the Luna despite employing ex-special forces, but her battle over the yacht continued in the Marshall Islands. In the final settlement, Tatiana accepted cash and art, among other things ($460 million by the court), but Luna remained out of her grasp.


If not the ex-wife the authorities may get the luxury vessel:
Despite ending his divorce debacle in court, Farkhad Akhmedov is not in a peaceful place and lives with the threat of losing his pride and possession of Luna luxury yacht to German authorities. The proactive German authorities are awaiting the repairs to be completed; just as Luna megayacht tries to leave, they plan to seize it from the Port in Hamburg. German officials of the Federal Criminal Police Office in the port of Hamburg also captured Alisher Usmanov’s $600 million yacht Dilbar. An investigation into the “offshore concealment” of the early Facebook investor Usmanov revealed the owner of 500 feet long Dilbar to be Usmanov’s sister, Gulbakhor Ismailova. She is also featured on the sanctions list.
Journalist Philipp Eckstein from ARD-Hauptstadtstudio, a television studio in Berlin, follows the Luna yacht’s movements and tweets updates. After confirmation from Marine Traffic, he tweeted, ‘authorities in Hamburg tell me credibly: not true! The “Luna” is still in the port of Hamburg for repairs and is currently not fit to go anywhere. Also, a shipyard spokesperson just confirmed that the ship remains in a dock in Hamburg. #Jacht #Megajacht #Megayacht #Luna 2/x.’
About Farkhad Akhmedov:
This Azerbaijani businessman and former Russian politician started by trading furs in international markets. Later, he founded and headed the Tansley Trading Company specializing in the supply of equipment for the USSR’s oil and gas industry and traded in oil and oil products. Akhmedov has been a permanent fixture on the list of the top 200 richest people in Russia, according to the Russian version of Forbes magazine.

In 1998, the self-made billionaire bought a 44% stake in another investor, Bechtel Energy, and became chairman of Nortgas. Besides the beautiful Luna motor yacht, which he purchased from Russian oligarch Roman Abramovich, the tycoon also owns the painting Untitled Yellow and Blue by the American artist Mark Rothko for $46.5 million.