Supercar Blondie is quite possibly one of the luckiest people on this earth, at least for automobile enthusiasts like me. In addition to all the latest and greatest cars to hit the market, the celebrated social media influencer also gets invites from manufacturers to check out their wild concept cars. A few weeks ago, Sergi Galiano from her team got the exclusive opportunity to get his hands on the Mercedes-Benz Vision AVTR concepts. In the latest video, Supercar Blondie, aka Alexandra Hirschi, got an invitation from Lamborghini to cover the Terzo Millennio concept that was showcased for the first time in 2017 as a preview of the brand’s evolving design DNA and its electric future. However, while filming the walkaround of the concept car in front of a beautiful church somewhere in Italy, cops showed up to write the influencer a ticket.


The walkaround video posted on Facebook shows the influencer getting interrupted in between the shoot by the arrival of two cops. She’s informed that it’s illegal to park in front of the church, to which she immediately apologizes. Hilariously, one of the cops writing the ticket tries searching for the registration plate on the car and ends up simply writing ‘Lamborghini’ on not finding one. The concept car doesn’t even have a windshield wiper which forces the other cop to simply place the ticket on the windshield. But as it turns out, it was actually a prank played by Lamborghini on Supercar Blondie with the help of the local police. “Lamborghini called their friends at the local police department to play a little prank on me,” reads the description on the influencer’s channel. 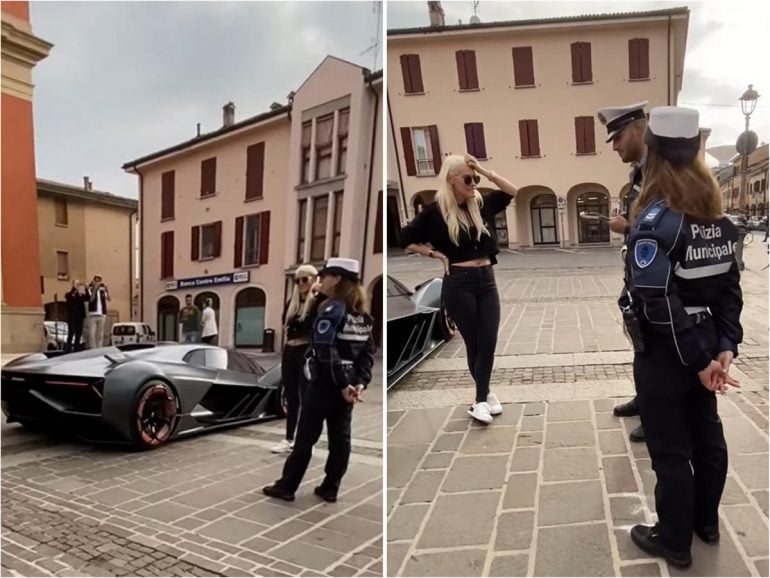 Some might point out that it might be a completely choreographed video just to create a viral post. The way things are on social media platforms, we can’t be sure either. Nevertheless, the Terzo Millennio concept is good enough on its own to check out the video. The electric hypercar concept was developed with the help of the Massachusetts Institute of Technology and gets several different very interesting features. Instead of heavy batteries, the concept is powered by supercapacitors. Even the bodywork is capable of storing energy, which is wild. As Supercar Blondie points out in the video, the body is made out of self-healing carbon fiber developed by MIT. The Lamborghini concept is just mind-blowing!