The super-rich around the world have one thing in common; they all have an endless list of insanely expensive toys to their collection. They often compete with each other in terms of bragging rights of their possession, and uber-expensive yachts often feature on the top of the list. One does not truly become a billionaire till he doesn’t own a super-sized luxury yacht. Let’s take a look at the top 5 most expensive yachts in the world. 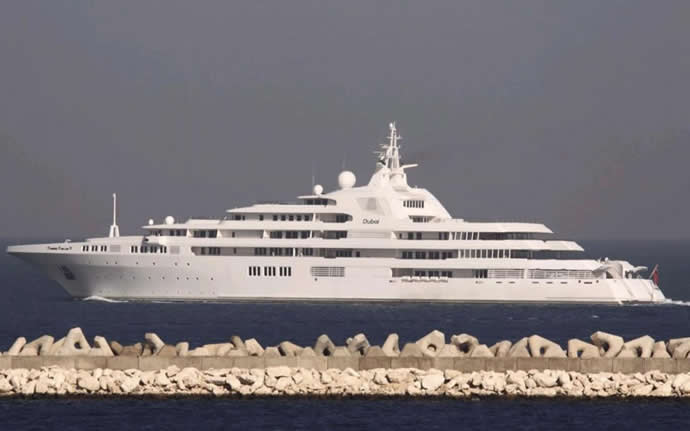 Origin – The construction of the Dubai motor yacht was launched in 2006, but it originally began more than 10 years before the official launch for Prince Jefri Bolkiah of Brunei. The construction was then a joint project between Blohm + Voss and Lurssen shipyards which was halted until 2001 when the hull was acquired by Platinum Yachts for His Highness Sheik Mohammed Rashid al-Maktoum. Several names previously knew the project, including Platinum, Panhandle, and Golden Star, but were re-named Dubai. 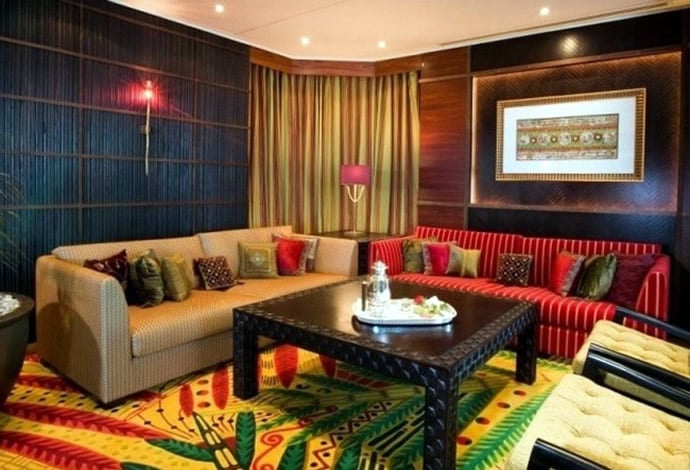 Owners – The yacht is currently owned by Sheikh Mohammed bin Rashid Al Maktoum, the ruler of the Emirate of Dubai and the Prime Minister of the United Arab Emirates. 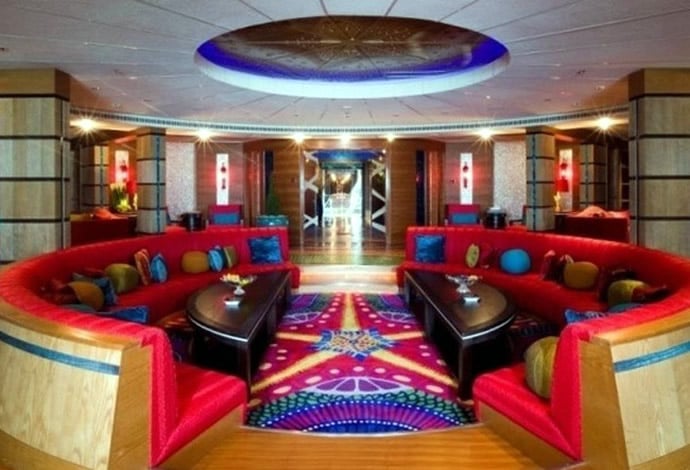 What makes it special? The Dubai yacht is 524 feet, 10 inches (162 m) long, and is the third-largest yacht in the world after Azzam and Eclipse. It has a total of 44 cabins, and Dubai’s spacious decks offer a split-level owner’s deck; a large social area including the main lounge with its centerpiece red sofa, numerous VIP and guest suites, and a crew area to accommodate 115 people, including crew and guest staff. It can also accommodate a helicopter of up to 9.5 tonnes and carry two 10-meter long tenders. Powered by four MTU diesel engines, it can reach a maximum speed of 26 knots and has an exceptional range of 8,500 miles at 25 knots. 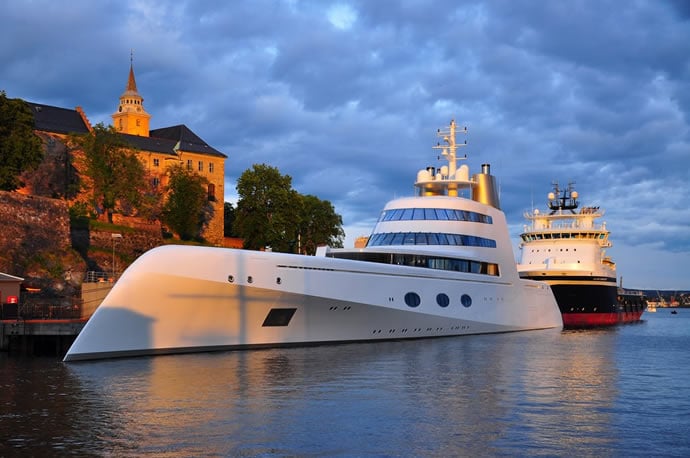 Origin – Arguably one of the best and the sharpest looking yachts in the world, the motor yacht ‘A’ was designed by Philippe Starck and Martin Francis and constructed by Blohm + Voss at the HDW shipyard in Kiel, Germany. It was commissioned in November 2004 and was known as the Project Sigma. It remained under the wraps for 3 years after which it was delivered in July 2008. 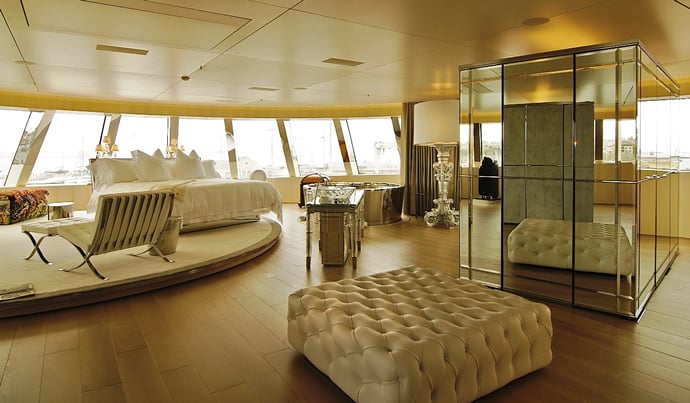 Owners – The luxury motor yacht is owned by Andrey and Aleksandra Melnichenko and is named after the first initials of its owners. 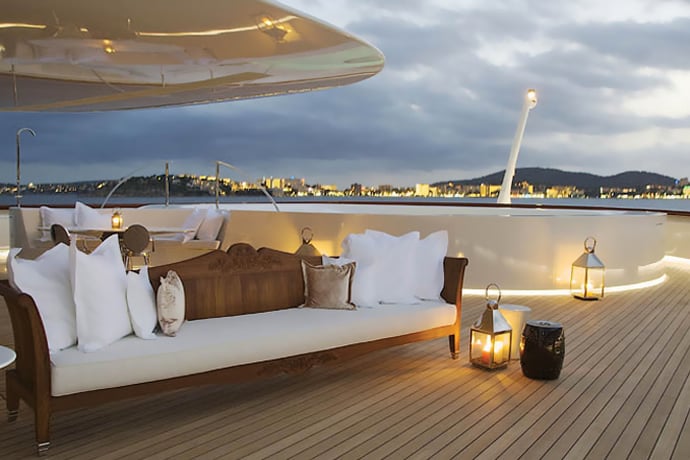 What makes it special? The luxury motor yacht has one of the most intriguing designs and has polarized opinions since its launch. Styled to look like a cross between a submarine and a stealth ship, industry experts have referred to it as the “most loved and loathed ship on the sea. The vessel is 390 feet (119 meters) long and is one of the biggest yachts in the world. The interior has a distinctly modern design similar to the exterior. It features excellent use of space, wood furnishings, and numerous other details, such as a glass roof looking up into one of the swimming pools. It can accommodate 14 guests and 42 crew members and has a total of 7 cabins. Powered by twin 6035hp MAN RK280 Diesel engines, luxury motor yacht ‘A’ is and is capable of reaching up to 23 knots. 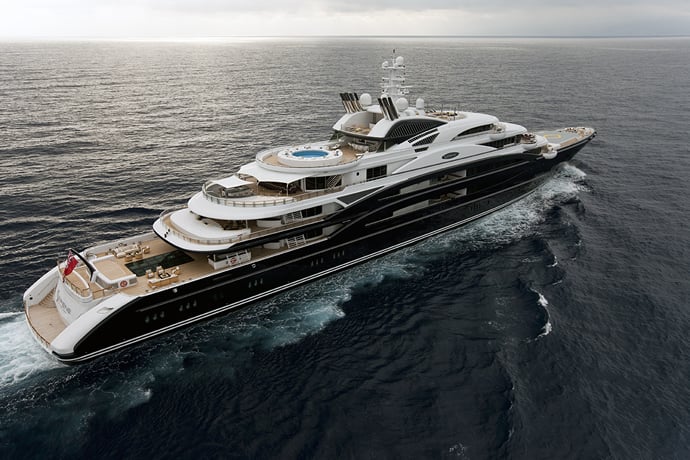 Origin – The Serene is a 494 feet (134 meter) motor yacht which is one of the biggest in the world and was launched in 2011 by Fincantieri Yachts. Construction on the yacht began in 2007 and it is believed to be one of the most technically advanced luxury yachts ever constructed. 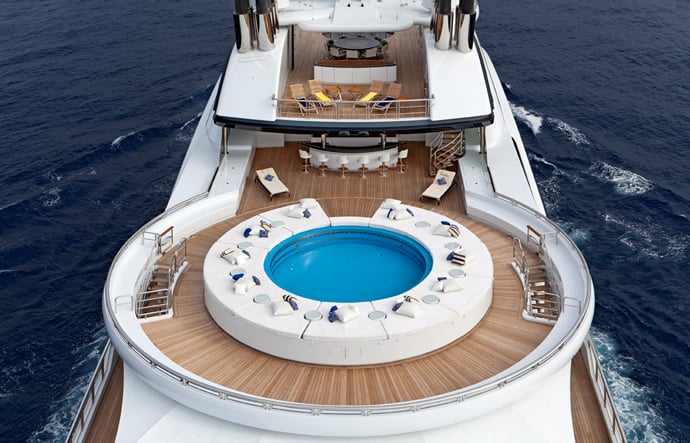 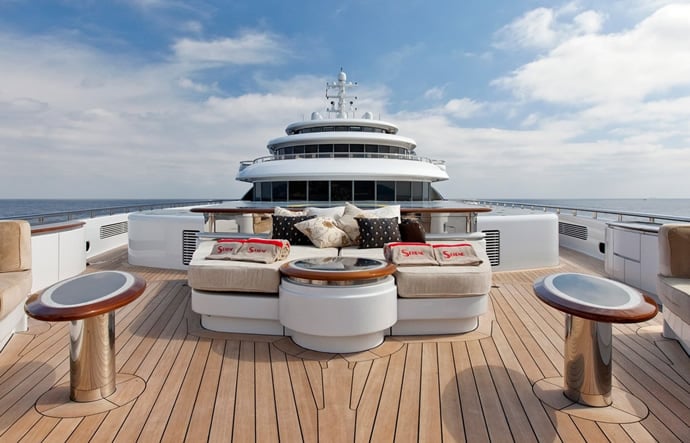 What makes it special? It is currently believed to be the 9th largest privately owned luxury yacht in the world. It features two helicopter landing platforms, storage for a large submarine able to reach a depth of more than 100 meters, and an indoor seawater pool. It has seven decks and nearly 50,000 square feet of interior space. The interior of the luxury yacht was designed by Pascale Reymond of Reymond Langton Design, and naval architecture and exterior design are the work of the famed Espen Oeino. The most eye-catching feature of all is the turquoise-colored neon runners that outline the ship. It has 12 cabins and can accommodate 24 guests and 52 crew members. 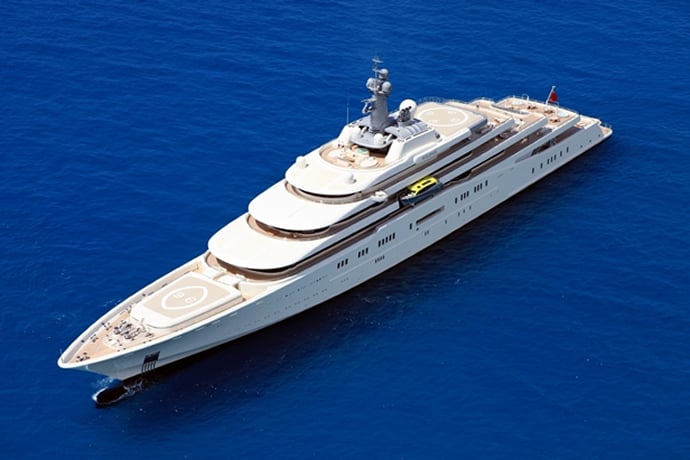 Origin – Luxury motor yacht Eclipse is the second biggest and the expensive privately owned vessel in the world only after Azzam. It measures 163.5 meters (536 ft) long. Launched in 2009, it was constructed by Blohm + Voss of Hamburg, Germany and the exterior and interior were designed by Terence Disdale Design and its naval architect was Francis Design. 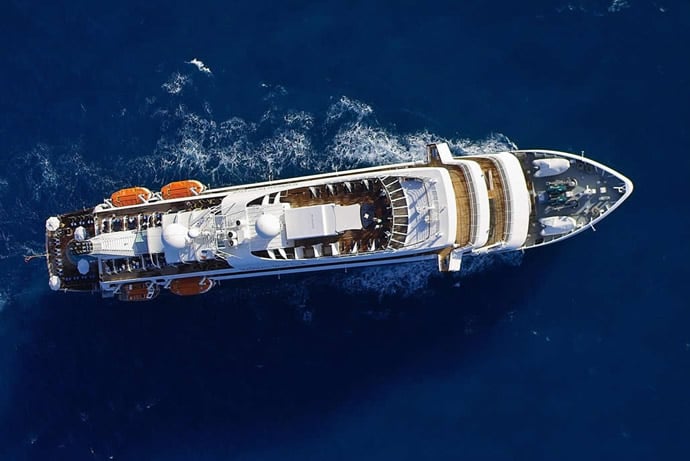 Owner – The superyacht is owned by the Russian tycoon Roman Abramovich, one of the world’s richest individuals and 5th in Russia. Abramovich’s current net worth is in excess of $14 billion. 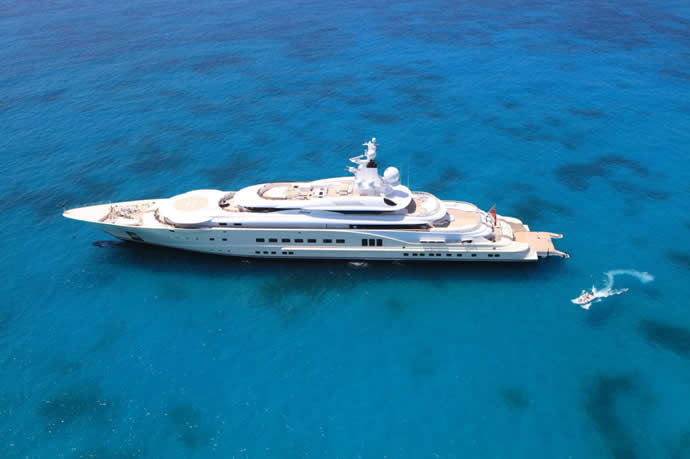 What makes it special? Though the official price of the yacht is $485, according to estimates, the real valuation of the Eclipse is close to $1.12 billion. At its launch, Eclipse’s unprecedented size ensured much of its features were veiled in secrecy and was subject to many rumors and speculations from both the international press and yacht connoisseurs. Eclipse is rumored to have an anti-paparazzi system, a laser that is used to detect the electronic light sensors that digital cameras use. The camera is then targeted with a beam of bright light that overexposes the photo, which becomes useless. Eclipse also has two swimming pools and two helicopter pads; she has a crew of over 60 personals. For security, the yacht is fitted with intruder detection systems and a German-built missile defense system. Abramovich’s own master suite and the yacht’s bridge are fitted with armor plating and bulletproof windows. 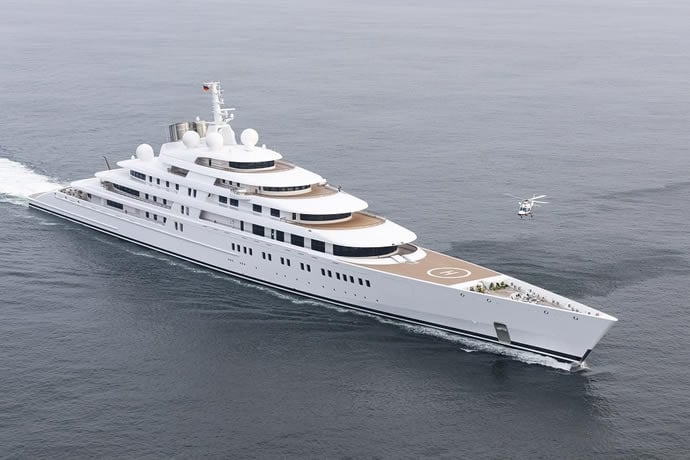 Origin – Motor yacht Azzam is the world’s largest private superyacht at 180 metres. The massive-sized luxury yacht is the latest to join the fleet of the world’s most expensive vessels, as it was launched this year on April 5th. Built by Lürssen Yachts, Engineer Mubarak Saad al Ahbabi directed the construction of Azzam. The technical engineering was provided by Lürssen, including design by Nauta Yachts and interior design by Christophe Leoni. It took only three years to complete the construction, which is a major milestone in the yacht industry. 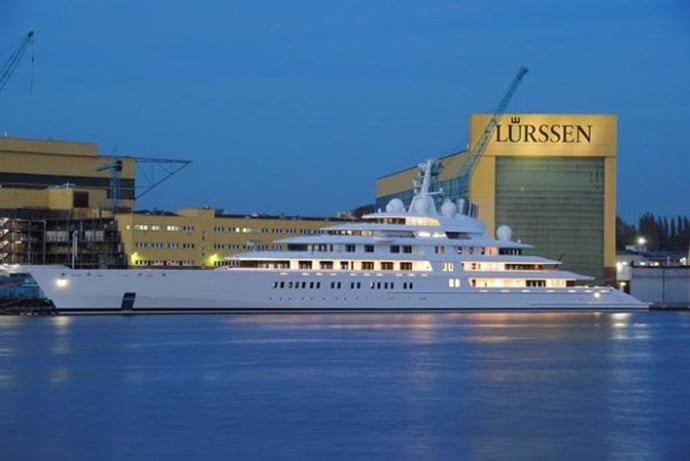 Owner – The luxury yacht Azzam was launched this year in the month of April, and the owner of the vessel is not yet known for certain. But according to rumors, the Motor yacht Azzam is probably built for Sheikh Khalifa bin Zayed Al Nahyan, the Emir of Abu Dhabi and President of the United Arab Emirates. 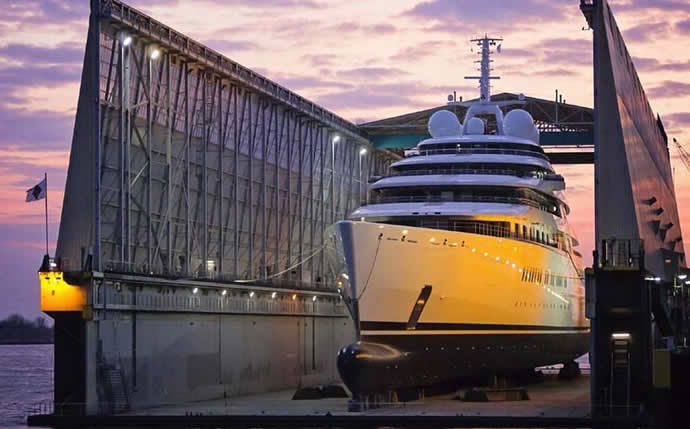 What makes it special? The fact that it’s the largest privately owned superyacht in the world slots it at the top spot. Until Azzam was launched, Abramovich’s superyacht Eclipse held the title for being the largest and the most expensive in the world. The engineering marvel was built in a record time of just 3 years. Among other features, the yacht has a main salon with a length of 29 m and a beam of 18 m with an open plan and no pillars. It has a top speed of 32 knots. It is powered by a combination of two gas turbines and two diesel engines with a total power output of 70 MW (94,000 hp) through four pump-jets, two of which are non-movable round water outlets in the middle of the stern and two with thrust vectoring capabilities using moveable duct water outlets positioned on either side of the non-movable one. In addition to it, the yacht has a bulletproof master suite, a missile defense system, two helipads, an onboard movie theater, two pools, and its own miniature submarine. According to reports, the annual operating cost of the luxury yacht is estimated at $60 million.