While the present cinema tendency in most metros and cities around the world may be a recliner within four walls, but providentially for us there are a few companies out there who deem the notion of indoor theatres and leather seats as monotonous, although there are handful of theatres globally who strive to provide comfortable bed-like seats. Modern concepts globally range from being accommodated in a hot tub, to viewing a movie while sailing through the waterways of the United Kingdom. Wouldn’t we just love it? We’ve scoured the theatres of the world to bring to you a compilation of movie theaters around the world that take going to the movies to a whole new level.

Read up further on the 9 most innovative and spectacular cinemas ever, that may as well take your breath away.


#9 Kino Kalaja Cinema, Prizren, Kosovo
Panoramic views of the city of Prizren grace the occasion when one watches a film at the Kino Kalaja cinema. The esteemed DokuFest hosts the cinema during the festival and was held from August 8th to 16th 2015.
#8 Archipelago Cinema, Kudu Island, Thailand
At Thailand’s floating movie theatre, the film is only part of the movie going experience. Made exclusively for the Rocks Yao Noi Festival, this cinema is located right on top of a blue-green Thai lagoon. Boats ushered event attendees to their floating seats at screenings under the starry skies at the lagoon centre. Unfortunately for us cinema fanatics, the floating marvel is now just a memory. After the festival, it was donated to the community of Yao Noi as a playground and stage.
#7 Sci-Fi Dine In-House Restaurant, Walt Disney Studio, Florida
Picture this: you’re in a car at a drive-in watching silly, mid-century movies about zombies and the blob, when a server glides up to your table with a full rack of ribs and some fries! Just about perfect, right; I think so, too. So to tell you more, as you enter the dining area, you’re transported back to 1955 and up on the big screen they’re playing movie clips, commercials and other shorts from that era. You’ll be seated in a classic car with the seats sitting side by side. There are a few traditional tables floating around the dining area for larger groups. As for the menu, there are plenty of options to please everyone.
#6 Amante Beach Club Cinema, Ibiza, Spain
Thanks to the revitalization of all things retro, open-air cinema is back in Ibiza and has had an upgrade. The landscape is set magnificently with bean beds for you to laze out on, petite tables’ ideal for your cocktails, candles, hors d’oeuvres and drinks. The company Lime in the Coconut, who organise these special outdoor cinema events, got so excited about creating the perfect cinema experience that they designed and developed their own set of bean beds. Screening movies 11 pm onwards on their private beach from May to October, Amante Beach Club overlooks the Sol D’en Serra bay. 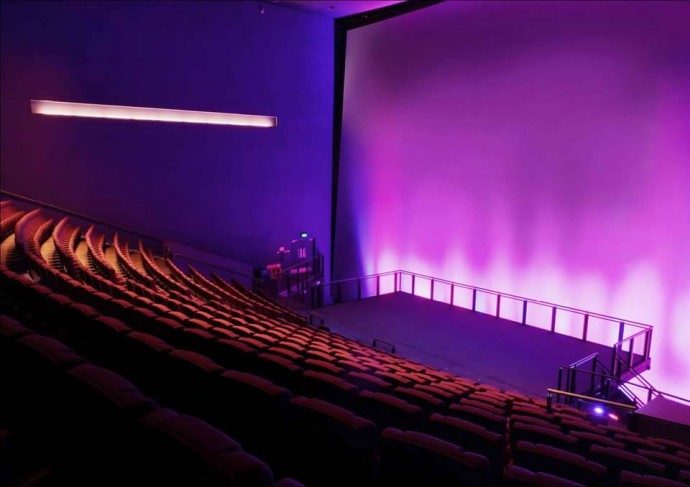 #5 Edible Cinema Experience, London, United Kingdom
There is a unique way to watch and enjoy films in London, through the power of taste and smell. From Pan’s Labyrinth to American Werewolf in London, this company has guided cinema goers thought the sights and tastes of Cinema. The concept, well it is pretty simple. Edible cinema aims to create a cinematic food experience bringing the watcher into the film with the menu and flavors that are served. The screenings work like this: each audience member finds a tray of small numbered containers at their seat, which contains a canapé sized serving or mini cocktail. The film plays and at the specific moments, the food-matched sections are signaled by a screen-side light box, which shows food that should be opened to compliment the scene.