Trust China to extend the most stomach-churning, gravity-defying, and mind-blowing experiences. Their fixation with thrill-seeking and to scare the daylights out of acrophobics by building the most freaky, adrenaline-boosting bridges in the world is ceaseless. Few examples are the world’s longest suspension glass-bottom bridge opened in Lianzhou and another 1601 foot long glass-bottomed suspension bridge, the Hongyagu bridge that wobbles mid-air for the sake of the thrill. The Zhangjiajie Glass Bridge Bungy takes the matter to newer heights, quite literally (pun intended). Bestride between two cliffs in China’s Hunan province; a glass-bottomed suspension bridge offers the world’s highest bungee jump from a footbridge. 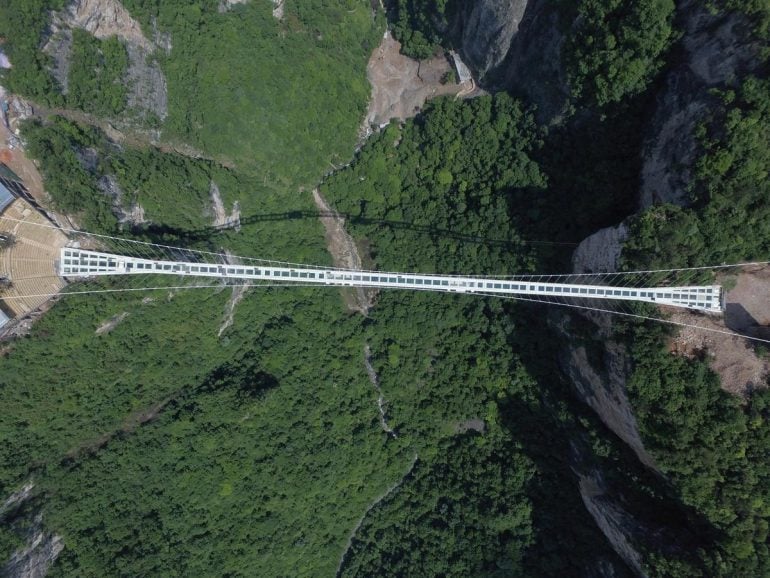 This 430-meter-long glass-bottomed bridge has been designed by architect Haim Dotan and is believed to be the world’s longest and tallest glass pedestrian bridge. Whether you can muster the strength to stroll on this pedestrian bridge or not, there are a few adrenaline junkies who are gearing to leap from a height of 853ft. It’s the most stomach-churning and exciting way to take in the views of the surrounding Wulingyuan wilderness, a UNESCO World Heritage site. 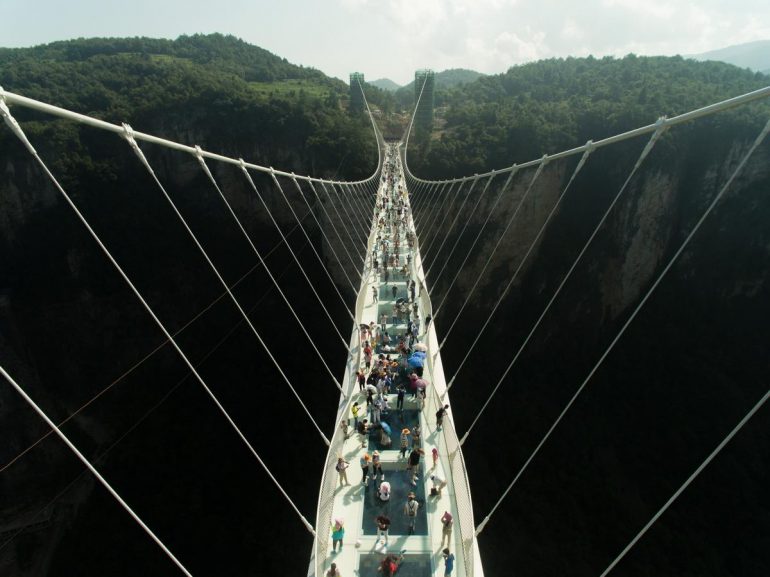 This picturesque location’s deep ravine and gorges are inundated with quartzite sandstone pillars and peaks, making it a taking visit even if you don’t like a bungee. The bungee jumping operation was launched at the end of 2020, so business has been building slowly, but domestic visitors are already thronging the place. Operator Jonni Deaker said, “We are probably averaging twenty jumps a day at the moment, which is pretty good for a jump this size,” Deaker said, adding he was confident of a solid July-August holiday season. Do you have the guts to leap from the world’s highest bungee jump platform?

Visitors to the Zhangjiajie Grand Canyon Glass Bridge in China's Hunan province can bungee jump from a height of 850 feet, a stomach-churning way to take in the views of the surrounding Wulingyuan wilderness, a UNSECO World Heritage site. Read more https://t.co/tBO4rR422L pic.twitter.com/dIcjFAmkiz


If Deaker’s tips are something to go by, this can be more exciting than terrifying as the sheer height makes it less intimidating than smaller jumps. ‘Because it’s so high, it actually makes it easier’, Deaker said. ‘When you’re this high, it’s kind of like skydiving.’ Tickets to access the glass bridge cost $23, in addition to the $19 charge to visit the Zhangjiajie Grand Canyon Scenic Area, which is located in China’s Hunan Province. The cost of the bungee jump has been cut by around 40 percent to RMB 1998 (roughly $306).

Tags from the story
China, Worlds-Highest