Being built way back in 1870, the ancient Palace of Westminster now has some serious safety concerns and is in urgent need of major refurbishment that could cost anywhere between four to seven billion pounds. A new report said that the structure currently has a “substantial and growing risk of either a single, catastrophic event, such as a major fire, or a succession of incremental failures in essential systems.” In order to carry out the necessary upgrades and repairs to evade any possible crisis, moving the Parliament is only logical.

As a solution, American architecture firm Gensler is proposing that the British Parliament be temporarily housed inside a floating glass bubble on the River Thames. Conceptualized on Westminster Hall’s hammer-beam roof (roof of the Palace’s oldest building), this 820-foot-long, 138-foot-deep, elongated glass structure would be called ‘Project Poseidon’, floating on the Thames, just in front of the Parliament building. It will have steel modules and two wooden domes dressed in curved glass panels, segregated internally for each Parliament chamber – one for the House of Lords and the other for the House of Commons. British shipbuilders will make Poseidon’s steel modules, which would later be transported along the Thames and assembled on steel platforms behind the Palace of Westminster.

It is estimated that Project Poseidon would take less than thirty-six months to reach completion. Gensler architects say that the structure will be located within a traffic exclusion zone that’s already established around the Palace, and Thames would act as natural security surrounding for UK’s Lords and MPs. 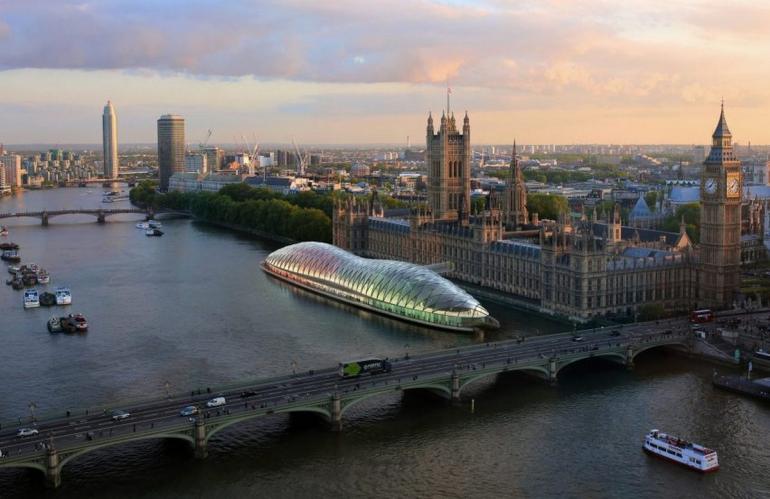 Elaborating on their fancy architectural brainchild, Gensler said, “The building would be a dramatic, high-tech, wooden-framed structure covering 8,600 square meters, which would provide all the necessary environmental and acoustic containment”.

Gensler has estimated the cost of construction and installation of Project Poseidon to be approximately £160 million (roughly $195 million). This amounts to a saving of £1.8-2 billion that would otherwise go towards rental and relocation costs, as well as reconstruction expenditure on other buildings to make them fit for occupation.

Work on the complete overhaul of the Houses of Parliament is expected to start after 2020 and could take as long as six years to finish. The start date and period of completion may both go up, given the degree of complexity and intricacy involved.

The designers are suggesting that once the original parliament is brought back to life, the floating Poseidon may be towed away and could even be repurposed into a ‘Museum of Democracy’.

The radical Project Poseidon is receiving mixed reviews. While Labour Party’s Jeremy Corbyn, UK Leader of the Opposition, thinks the plan is “very interesting” with “outline drawings of merit that should be looked at”; tabloid Evening Standard termed the plan as “bizarre”.