At the ongoing 2017 edition of Dubai Airshow, Emirates has announced a multi-million dollar upgrade to the interiors of its Boeing 777 aircraft, which includes new first class private suite with up to 40 square feet of personal space on offer and will be fully-enclosed with sliding doors. For the design of the suite and all the create comforts offered by it, the Dubai’s flagship airline took inspiration from Mercedes-Benz and its range-topping S-Class luxury limo in particular. It’s not the first time an airline company has collaborated with an automaker to give its first class a makeover; a few years back, Singapore Airlines had teamed up with BMW to redesign its first class cabin. Created in collaboration by Boeing and Rockwell Collins, these new suites take inflight luxury and privacy to a whole new level. Emirates’ president, Sir Tim Clark, said: “This is the first time an Emirates product has been so influenced by another luxury brand, but it is a natural fit as both Emirates and Mercedes-Benz have the same unwavering commitment to fine detail, uncompromising quality, and a drive to push the boundaries.” 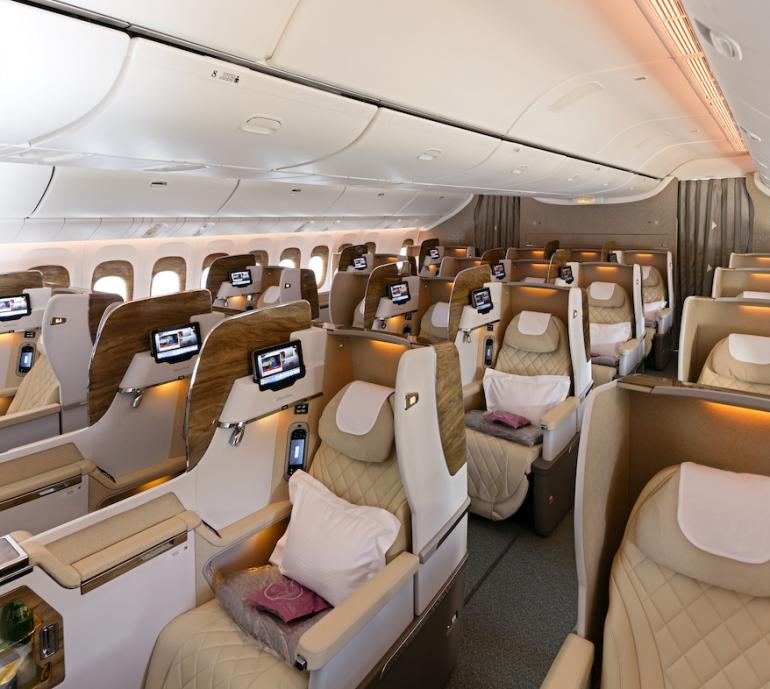 Influenced by the Mercedes-Benz S-Class, several design details in the private suite including the soft leather seating, high-tech control panels, and mood lighting mirror the design language of the German automaker’s flagship sedan. The seat, in fact, reclines into a fully flat bed and can be placed in a “zero-gravity” position inspired by NASA technology, giving a feeling of relaxation and weightlessness. Although the private suits are set in 1-1-1 configuration, to ensure all first class passengers have a view of the outside Emirates has introduced the industry’s first virtual windows for suites located in the middle aisle. The first class flyers can also view over 2,500 channels of on-demand entertainment on a 32-inch Full HD TV which can be experienced even better with the Bowers & Wilkins Active Noise Cancelling E1 headphones created exclusively for Emirates. In addition to that, the flyers are also offered an inspiration kit in each of the suites which features a luxury Byredo skincare collection, Hydra Active moisturizing pajamas, and Bulgari amenity kits.

Emirates even got Jeremy Clarkson to give a tour of their new Boeing 777 first class private suits and detail all the new upgrades in his typical manner; I’m already sold! Emirates and Mercedes-Benz are also extending their partnership to provide a fleet of its S-Class cars as part of the airline’s complimentary chauffeur service in the U.A.E. for first class passengers. The new first class private suit will only be available on the Boeing 777 aircrafts operated by the airline. There is no word if a similar upgrade will make its way to the massive Airbus A380 fleet Emirate has. Rather, the massive interior space inside the super jumbo makes it even a better prospect for the completely isolated first class cabins. Maybe in the near future; only time will tell.
Tags from the story
Emirates, Mercedes-Benz