Rj-Romain Jerome has been customizing and designing special edition watches for long enough to know that their consumers expect something unique as often as possible, even if the collaborations are somewhat repeated. In the latest news from the Swiss watchmaker, a tie up with Warner Bros. Consumer Products, on behalf of DC Entertainment, has yielded the very radical looking Spacecraft: Batman limited edition timepiece that collectors will most assuredly be queuing up for. 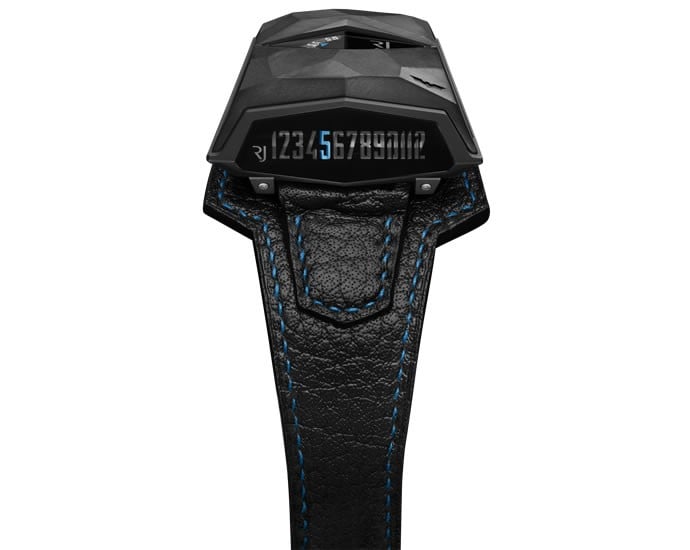 The Spacecraft: Batman marks the second Batman styled watch from the company, the first being the Batman-DNA timepiece launched last year for the Dark-Knights 75th Anniversary. This edition is based on their Spacecraft design

that made its debut in 2013, and has been crafted to try to capture the mythos and aesthetics that we’ve come to appreciate about the world’s greatest detective. The Spacecraft: Batman limited edition that’s designed using materials like titanium, embodies the original Spacecraft design with a finish that looks like it could have been stripped off the Batmobile itself. The facetted cap of the watch has been engraved iconic Bat-insignia from Christopher Nolan’s the Dark-Knight trilogy. Other materials also include anti-reflective metalized sapphire crystals for the glass sections.

Just like the Spacecraft, the hours are displayed on the side with the numbers highlighted with a bright blue indicator and read off laterally. The minute indicator is featured on a black rotating disc with a striking blue cursor on the top of the case. The limited edition Spacecraft: Batman watch also features a unique self-winding mechanical movement with the screw lock crown that has been placed on the extremity of the case to facilitate time change. The strap is made of buffalo leather in black with visible blue stitching and a titanium pin buckle that not only enhances the overall look of the futuristic looking timepiece but also adds a touch of class, something I’m sure Bruce Wayne would also appreciate.

Only 75 pieces will be produced with a price tag of about $33,000 for each Spacecraft: Batman limited watch. That’s not cheap but it’s not like any of the Batman’s gizmos and gadgets look any less sophisticated or inexpensive either.