Whopping and staggering is synonymous to Andy Warhol. The Kurt Cobain of the art world has had one of the most dedicated fan following posthumously, since Picasso or Da Vinci and all. While his portraits have been the most ‘hammered’ bids, this time it was his humble One Dollar Bill that claimed the winner’s torch. The painting fetched 20.9 million pounds ($32.6 million) for the auction house, way up high from the estimated 18 million pounds. The 4.3 feet tall painting was one of 10 he did in 1962 in New York with the dollar theme, a project that boosted his glorious artistic career. Those following his work know him to have had a plush corner for money and he has often been quoted making honest praises. The painting is incidentally the last of his hand-drawn painting, before he embarked into the iconic silk screen technique that brought fresh trends into modern pop art. 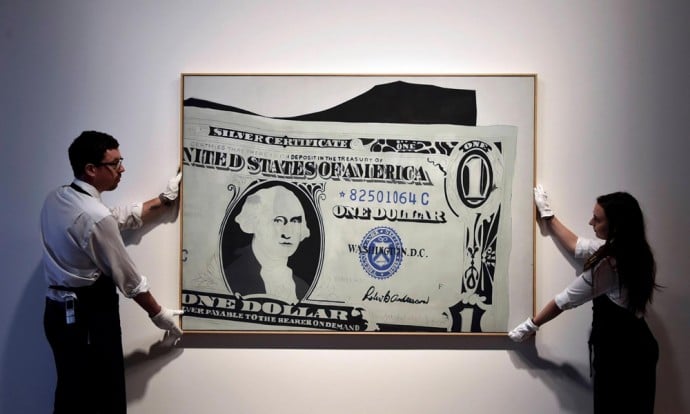 The auction also gathered lot of interest as well as pounds for Lucien Freud’s ‘Four Eggs on a Plate’. The painting shocked the auction house when bidders pushed the bid nearly seven times its expected price fetching 989,000 pounds, an unbelievable climb from an estimated 150,000 pounds. Freud, a German born British painter, gave the painting to his friend, the Dowager Duchess of Devonshire – who was known to have a dedication for chickens (oh the ways of the rich, and royalty). She was so in love with chickens that apparently she bred them with care and affection at her estate at Chatsworth. She would take eggs for her friends, one being Freud who was so smitten by this innocent, gentle act that he gifted her this painting.

What didn’t fare as expected, was Francis Bacon’s ‘Study for a Pope I’ which didn’t get a single bid. But that was covered up by two of his unseen self-portraits which fetched 15 million pounds per piece. These portraits, Self Portrait (1975) and Three Studies for Self-Portrait (1980) have never been displayed in public before.