The Tango superyacht owned by sanctioned Russian billionaire Viktor Vekselberg had become the first luxury vessel to be seized by a joint operation carried out by the FBI at the request of U.S. authorities along with Homeland Security Investigations and Spain’s Civil Guard. A few weeks after being impounded at the Marina Real in Palma de Mallorca, Spain, the authorities are now finding it difficult and very expensive to maintain the superyacht estimated to be worth $90 million. As a result, the uber-luxurious superyacht might soon hit the auction block and be sold for a knock-down price.

According to a report by The Guardian, the 77-meter Tango superyacht was seized by the FBI and the Spanish police as part of investigations into fraud, money laundering, and false documents allegedly used to hide ownership of the vessel to avoid sanctions. Although Vekselberg was already sanctioned by the US in 2018, the Ukraine-born Russian billionaire used “US dollar payments through US banks” to buy and maintain the boat, according to the Department of Justice. However, now that the asset has been seized from the wealthy Russian oligarch, the responsibility for its maintenance lies with the US Marshals Service.
Generally, the annual cost of running and maintenance cost of a superyacht is close to 10% of its price, which comes to around $9 million in the case of Tango. However, the cost to keep a luxury vessel sea-worthy greatly escalates if stays moored for a long period. What this means is seizing the Tango has now become more of a burden for the federal agency which will have to use tax money to foot the bill of keeping the superyacht in the same condition as it was when it was seized. “If the maintenance and storage become prohibitively expensive, the government can go to the court and say, ‘we want to sell this and reduce it to cash,'” Stefan Cassella, a former federal prosecutor, and money-laundering expert told The Daily Beast.
In fact, if the superyacht is not sold to be converted into a liquid asset, it could end up at the scrapyard where it will have to be dismantled for parts to pay for costs already incurred. A Bugatti can be kept under a tarp in a garage until a case is concluded,” says one federal law enforcement official. “The same can’t be said of a yacht that’s the length of a football field.” However, there’s one big problem in auctioning off the superyacht. It’s a well-known fact that a lot of the buyers of massive superyachts are Russian oligarchs and businessmen who have either been placed on the sanctions list or have been badly impacted by the Ukraine war. As a result, the market for luxury yachts is in shambles and it would prove to be a very difficult task for the authorities to get good money by selling Tango.
$90 million Tango superyacht and its ultra-luxurious amenities
Although Tango is not as massive as some of the gargantuan superyachts owned by other Russian oligarchs like the Eclipse and Sailing Yacht A, it’s still a mighty impressive luxury vessel. Measuring 77.7 meters in length, Tango is the 189th-longest yacht in the world. Built in the Netherlands by Feadship, the superyacht was delivered in 2011 and has been owned by Viktor Vekselberg ever since, sailing under the Cook Islands flag. The sleek design of the vessel includes a striking combination of a white hull with a metallic grey and blue superstructure, which was penned by Harrison Eidsgaard, who also designed the interior. In fact, Tango was also the winner of the 2012 World Superyacht Awards. 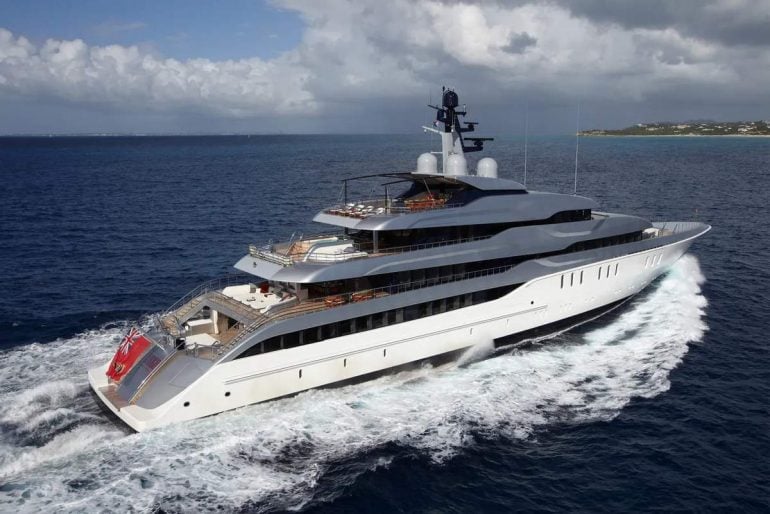 The interior design and layout of the superyacht are shrouded in secrecy, but it can accommodate up to 14 guests in 7 ultra-luxurious cabins, according to Superyachtfan. The vessel requires a crew of 22 people to operate. Some headlining amenities include a private owner’s deck with an aft seating area, full-beam stateroom, and separate study, along with a contra-flow swimming pool, an outdoor cinema, and a massage/beauty salon.


Who is Viktor Vekselberg?
Viktor Vekselberg is a 65-year-old Ukrainian-born Russian-Cypriot oligarch whose net worth is estimated to be close to $10 billion, according to Forbes, which makes him the 262nd richest person in the world. After graduating from the Moscow Transportation Engineering Institute in 1979, Vekselberg worked as an engineer and research manager at a state-owned pump manufacturer. His journey as a businessman began when he started selling scrap copper from worn-out cables; later, he bought several medium-size aluminum smelters and bauxite mines and united them into Saul Holding in 1996. Today, he is the owner and president of Renova Group, a Russian conglomerate that has interests in aluminum, oil, energy, telecoms, and a variety of other sectors. He has close ties with the Kremlin and has also been tasked by Putin to oversee projects to modernize the Russian economy. Vekselberg also owns a large art collection, including nine Faberge eggs he bought from the Forbes family for a reported $100 million.
Tags from the story
Billionaires, Russia, Superyacht